Google EarthVR is an example what can be achieved with auto convergence.

You can also change between Human/Giant mode in their app settings. (I don’t remember the exact setting name)

I got my HP Reverb G2 today and have just briefly played around with it. Perhaps a change in scale implicitly implies some sort of change in focal length but my main impression in only an hour or two of flying around is that the scale change is akin to having the drone camera in 2D MSFS in a more telephoto mode. Distances appear foreshortened and things farther away appear relatively larger as compared to closer objects than they would at a normal 2D viewing focal length. Maybe I’ll grow tired of the effect after a while but for now I like it because the 3D and the larger scale makes it easier for me to recognize streets and buildings on the ground when I fly over them in my home town. But it would be great to be able to tune VR scale/focal length.

Sure something in FS2020 is different to other simulator titles as far as scale is concerned. MSFS is the only title where I hear other players consistently complain about scale being an issue. I never hear these issues from the same people when it comes to DCS, Aerofly or IL2. MSFS is doing something different. I am probably one of the lucky ones where I dont have an issue with scale but many of my fellow simmers have issues with the same headsets (G2’s). The only aircraft I have an issue with as far as scale goes is the C172 as it feels much narrower than the real thing of which I have over 300hours flying time in.

I have a IPD of 65. If I change it to 61 on my headset (OG VIVE) the world becomes bigger, although still smaller than it should be…I can just look at the stick…I would have to fly the plane with just the tip of my fingers…scale is off and that is a fact.

Also, I should not need to adjust my ipd on my headset…yes, I can make the world a bit bigger but also gives me a headache as my brain has to compensate for a wrong distance between my eyes…

It’s not that hard. Just fire up DCS and on the VR setting there is a tiny slider that adjusts world scale…Done!! Everyone happy. If it feels alright to you, don’t touch it. If it feels weird, just adjust it until it feels right. For me I always jump on the A10 and compare the stick to my warthog…when they are the same size I know it is the right setting!

Please implement this as it is very immersion breaking!

These sorts of things have also been discussed in some of the posts above.

Request for a "World Scale" adjustment in VR

I think what you are referring to is a Stereo Separation control, which might seem the same as IPD, but in fact is not. - IPD is the physical adjustment of the lenses to match your IPD distance, for better comfort and sharpness ( since the fresnel...

You can use fpsVR program (steam $3) to change your ipd through software.

I have an OG VIVE, kept my physical ipd (65mm) and just changed the ipd offset with fpsVR. You can do this while the sim is running, just need to restart steamVR after each change but not the sim. In my case after testing I needed an offset of -20. Massive change, finally a yoke that a human can use.

Just remember that aircraft are not scaled correctly, meaning, you will have to adjust the offset depending on the aircraft, some are smaller and some are bigger (ex: A320 has a massive cockpit, 747 not so much).

Conclusion:
It solves the scale problem but still need ASOBO to do something as I shouldn’t have to pay and use a 3rd party software to solve a msfs problem.

I just now finally tried it on a Quest (1), and everything feels way to small. IPD is adjustable and it feels the same regardless of IPD adjustment. It’s as if I’m stuffed in a slightly scaled down model world.

Elite Dangerous also feels smallish (but not as bad). The only game so far that feels mostly right is No Man’s Sky.

The only game so far that feels mostly right is No Man’s Sky.

Have you tried Half Life Alyx?

As for FS2020:
[BUG/FEATURE] Cockpit Size and World Scale in VR

I have not tried HLA. Is that on the good or bad side of the scale?

To me it is spot-on: sitting in a metro wagon feels life-like for example!

Different IPD meaning as explain above. You can adjust that IPD till the end of time nothing will happen.

After installing the mod that ads pilot and copilot to the A320FBW (which is the same cockpit 3d Shape as the Asobo one) I can clearly say that cockpit is oversized in comparison with a real one without even needing to go in one… LOL. The pilots are simply smaller compared to the size of the cockpit but the camera is the same as in all cockpits and the pilots models also the same. What changed is the cockpit that has the wrong size. One cause might be the absence of thickness of glass and walls.

This is interesting a test, it is easier to relate to other humans indeed.

I’ve been trying the A320 in 2D a few days ago for comparing some other things and this strikes me: in 2D the cockpit size feels real when panning around. I’m starting to think they might have voluntarily oversized the A320 cockpit so that when seated at the expected position, the range of visible gauges is what they were trying to fit in the view by default. It is far fetched but it could be and it is a common technique to bend the reality to fit a game “art director view”.

Another possibility is that the variation in scale is due to another bug, which is also related to my discovery of the Trees LOD problems and the POIs popping up only until close enough:

I’ve added this comment to the other topic where you can vote about this:
[FEATURE REQUEST] Cockpit Size and World Scale in VR

If everything in MFS world measures correctly in proportion with each other and also when viewed imported in 3DSMax or Blender measures correctly with the real world… everything but the cockpit of A320… if the cockpit is at wrong scale, let’s say 120% of normal scale… so when imported in 3dsmax or blender they will say it’s wrong, if you place that cockpit in a spot where it’s hard to compare with the real world… for example up inside a A320 fuselage which normally you can’t see or the parts you see are hard to measure or compare in the viewport, then if you want it too look realistic in 3D VR you can tweak the IPD of the viewports cameras so if they are wider spaced it will look smaller than it actually is (it can look at 100% although it is 120% of real). However at that point the world might start to shrink too and outside the cockpit you will start to notice things are too small but not by much because the difference is small and the cockpit sits farther from real objects to make them instantly smaller in comparison. Until you place pilots inside it that are fixed in size and realistic.

But what I think happens is in MFS (as opposed to DCS I think) uses correctly only one IPD between viewports thus the world is consistent and real (probably not perfect but… in comparison with A320) so because the A320 was wrong sized from beginning they decided to leave the cockpit as is. In 2D it can look still OK with the corect FOV parallax etc. But when VR was released… things started not to look OK. And at first just seems/feels off. You look at the rudder pedals and they look way too big and away and the throttles way out of easy reach and smaller for a felt hand in VR. And everything is confirmed when you activate the pilots that are fixed in size and coherently with the rest of the world. Then it’s clear. The cockpit is too big and should be srinked.

Actually you give me the idea plugin the G2 back, displaying the controllers and putting them in reference to known cockpit dimensions, then dig the FCOM and the other docs back from my A320 AirlinerXP development archives and compare

The cockpit is too big and should be srinked.

I have similar feelings from the very beginning. If you position yourself in the way that holding your stick feels right, then you realize the throttles are out of reach and I’m 180cm with long arms.
After analyzing the videos it’s obvious that real A320 pilots can easily grab the throttles without stretching their hands. 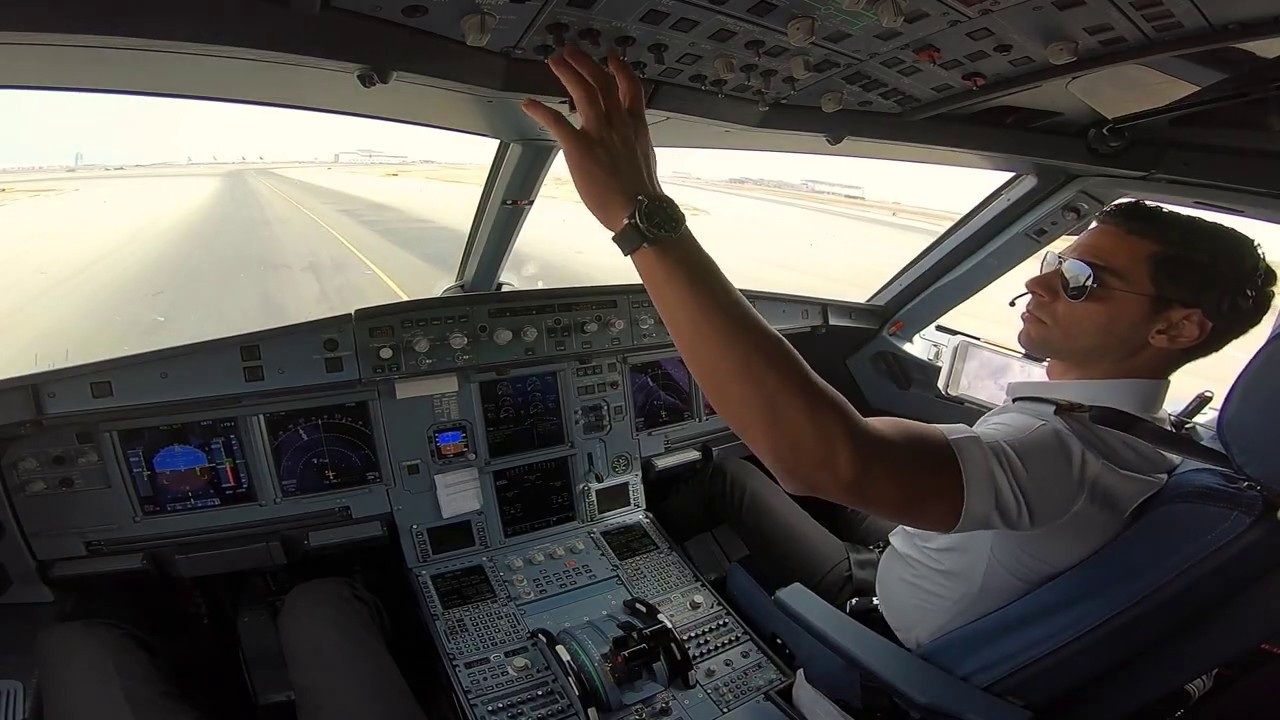 Will try the same in X-Plane but I already know that Zibo 737 is absolutely spot on.

Yep… not possible. Check out also the rudder pedals. In VR is like they are build for a Naavi 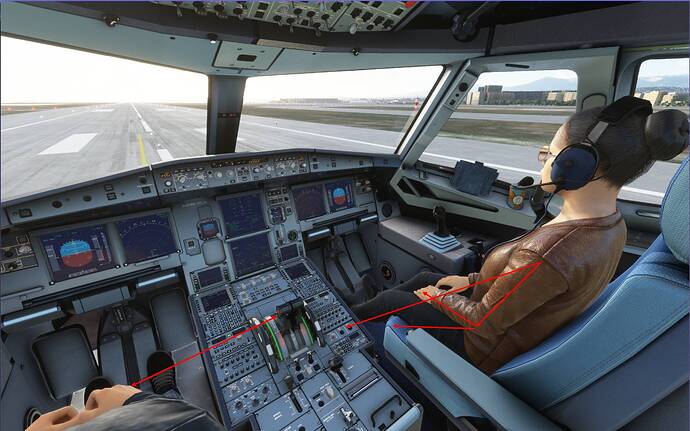 Sure not possible because if you look closely, the A320 seat in VR is also at the most recessed position (look the differences in the armchair arm positions - do you call this like this in English? - )

I know it looks like it will solve the problem but you can easily slide the view forward and is just the same.
The throttles when viewed in VR seems the neighbor’s throttle quadrant

The rudder pedals are those of Gulliver. And the AP panel unreachable. Other than that the cockpit is gorgeous to look at and when you move behind the commander seat (a bit further back from where the pic is taken) is really a site to behold in VR.