Hello everyone,
First forgive me if I post this in wrong category or something similar, this forum use very strange engine. I’m little confused.

Back to topic and let’s use TBM 930 as example. I try to use weather radar as see on tutorials. I switch MFD to weather horizontal radar mode. Screen shows me nice image of storm ahead but don’t refresh. To refresh image I must switch to map mode and back. Did I do something wrong? There is maybe “refresh rate” setting?
I can’t find anything on the internet.

Hi,
Are you able to scroll the different weather projections as in this video?
When you say the storm cell image doesn’t refresh - at what RANGE are you viewing it? The weather will appear to be motionless until you are relatively close range. 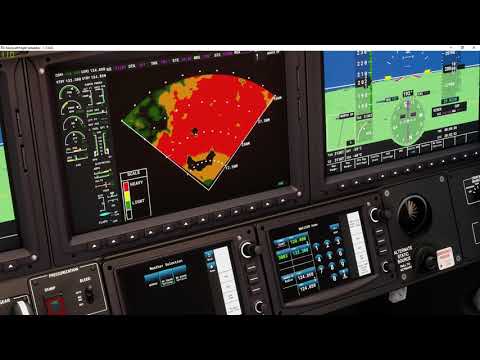 Thx, now I’m almost sure it’s a bug. When I change range image of storm didn’t match chosen range. For example when I get image on extrem 200 NM and switch it to minimum nothing change except for scale image. Image don’t change after sharp turn etc. NEXRAD and vertical mode don’t work at all.

Umm, sounds like something’s wrong.
What MODS have you got installed?

Yes, thanks to you a know it’s rather bug than feature. I send a ticket to support, and will try reinstall game. I play on Xbox and don’t have any mods (even from in game store).

Thank you for your time.

Well done for sending a Ticket. I wish more people were like you!

There’s a very good MOD out there for the Garmin systems with hopefully a G3000 coming soon to Market Place.

Any news on this? It seems like the G1000 NEXRAD is still not showing weather on the Xbox. Is Asobo aware of this bug?

Weather display doesn’t work on Xbox at all. It only refreshes if you keep toggling it off and on again, but obviously it’s fiddly to do. It doesn’t work by itself sadly. This has been a bug ever since the Xbox release in July.

Weather radar doesn’t refresh in WT CJ4, needs to be refreshed manually. I believe the WT themselves verified in their Discord channel that this is an MSFS issue. Possibly one of the numerous things that broke recently?

No, for Xbox weather radar is broken in all planes from relase date. And what Microsoft Asobo do? They mark ticket about this and knob problem as ‘solved’ and are €&@?#% happy about “good job” they do.

I hope the will fix this soon. Its shocking that this bug is not fixed since the xbox release.

It’s not just Xbox that’s affected though, as I think the weather radar used to work in thepast for PC. Now it doesn’t refresh, so probably broke after yet another SU. Typical.

It doesn’t work for me either using my a330NEO. Nor did it with marketplace aircraft. Still a huge issue for me in SU7, my fix is to turn on terrain and turn it off again, if my aircraft turns, or I zoom out, the weather does not scale or move, almost like the flightplan is painted onto a static background of the weather.

It’s a shame, and highlights the need for SDK updates and weather control to be dellegated to third party companys like HIFI etc…

It wouod be great for Asobo to look at what would realistically make this sim better rather than what would please casual gamers. Right, rant over

@admins would this be better in the bugs section?

I love MSFS, the weather problem must finally be fixed 100%. I (we) have been waiting for it for 1 year, it just makes me sad. No correct live weather = no flight for me

It was working for me perfectly yesterday (minus the radar ofc)

I do believe there is a OAT issue causing temps to soar above 200° for some people at certain altitudes, they may be playing around in the backend right now, keep your eyes peeled!

Yeah the weather radar is broken on every platforms and airplanes.

There’s no sweeping/refresh animation and the visual is static.

Any news on this? Will it be fixed for Xbox with the upcoming update?

Has this been reported as a bug?