What Addon are you waiting for on Xbox?

i think over time you probably can get the sensitivity profile mapped correctly for the triggers, but agree a HOTAS is better, esp for something like power over buttons A/B. I have the HOTAS one but that’s on the PS4 and its not compatible.

Totally, to be able to select reverse thrust, air brakes and auto brakes from the throttle quadrant, then flaps and viewing from the flight stick is a must have.

Just Flight PA 28
Everything from IndiaFoxTecho
FBW A320

(Have these on PC and would love them on xbox)

Also excited to grab the new ORBX Great Britain Central as its where I fly my short hops, along with some northern airports.

After playing since release on PC I am loving my experience on series x, I am too busy to be worrying about frames and optimisation anymore. I love the ease of it all.

I would love to see a regional jet. For more reasonable flights. Maybe the Aerosoft CRJ500/700?? please!

I just looked up India Fox Techo, amazing I fancy the Goshawk around the mach loop, I would prefer it as a BAE Hawk though… Do you think the ORBX scenery with a more demanding aircraft will impact performance on Xbox? I hope not. That was why I stopped playing on a PC.

Yes, I enjoy Short and Medium haul routes. To fly the procedures out of and into a busy civil airport. A VOR to ILS where you home to the overhead go outbound on a set heading descending to intercept the ILS at a particular DME when downwind. Just love it and can’t wait to have an aircraft that you can manage those parameters using the FMC and autopilot.

I agree… I would love to see a regional turbo-prop as well, such as the ATR-72 and similar.

I’m just excited and ready for more mods… just waiting for them to become available.

“Easy copy”… not sure… Xbox is powerful but have some restriction as RAM.

True… wish it was that easy!

I’d love to see some of the vintage prop planes in game at some point (Connie, Electra) and I’m hoping the JU-52 that’s currently being worked on makes its way to the Xbox at some point as well.

Here a info from just flight 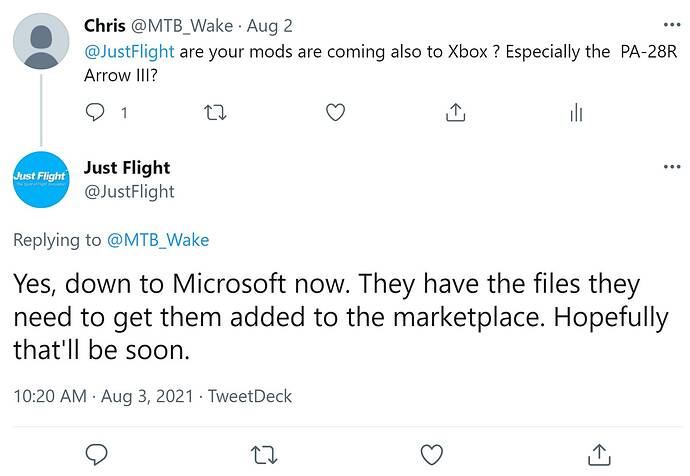 I’d like to have the FlyByWire A320neo on Xbox, as well as a good Airbus A380 made by anyone really, just to have that plane in my fleet as well.

Scenery-wise, I’d like to see LHSimulations’ airport updates, namely LBBP (Budapest Ferihegy) as well as Hungary’s other airports. They’re available on PC but not on Xbox - I don’t know if the guys have plans to do it for console as well.

Other than that, I really don’t crave much, there’s already 38 planes in the sim, with the free Top Gun expansion on the way. What I’d really like to see is real-life airline liveries, but I understand there are licensing hurdles to pass before those can be a reality in the marketplace.

Thanks for sharing! That’s great news from Just Flight!

Brilliant, Thanks for sharing

Anything by A2A Simulations, The Comanche in particular

first and foremost all the Marketplace planes and additions I bought on PC in the marketplace…I’ll see further after that.

There are airports on the in-game marketplace. Quite a few actually. You buy these in-game, not in the Microsoft Store.

Im fine with paying a bit (5 to 10 euro range) for a nice airplane. The 20 euro one’s are a bit expensive for my taste.

BA146, I would really like this one
Pilatus Porter (PC-6), to get a big plane in to small places
some cessna skymaster or any other RG cessna
A sukhoi with a radial engine
OV-10 Bronco

and heli’s. I know that a fixed wing sim is a whole different story than heli stuff but if they can make some nice heli’s that surprise me as much as the stock airplanes i’ll hapily fly them