What are you looking foward to in SU7?

I admit not tested myself but if its still an issue I would love that to be fixed.

That occurs as a result of using contamitated C-grade fuel…

Online traffic is broken though, at least it never departs from parking.

I’m looking forward to a proper keybinding of the condition levers.

Hopefully they fix the low level stuttering that was introduced with SU6. Many aircraft have stutters / are jumpy on takeoff roll and the first few hundred feet of climb. Then performance smooths out. Otherwise all is fine as is.

I hope we will get rid of the color artefacts (banding, purple fringes, bad color gradients) introduced with SU5. More Votes are necessary for that, I fear. 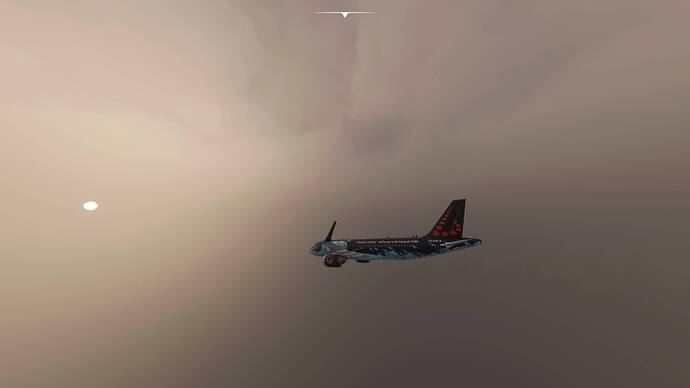 I have not loaded #6 yet. I was celebrating my 36th anniversary on a ship in the Caribbean. I thought it would be good to have a good rest before attempting to do something like update my flight simulator. It has been known to be very stressful

I am hopeful that will not be the case
When I update this week. Wish me luck 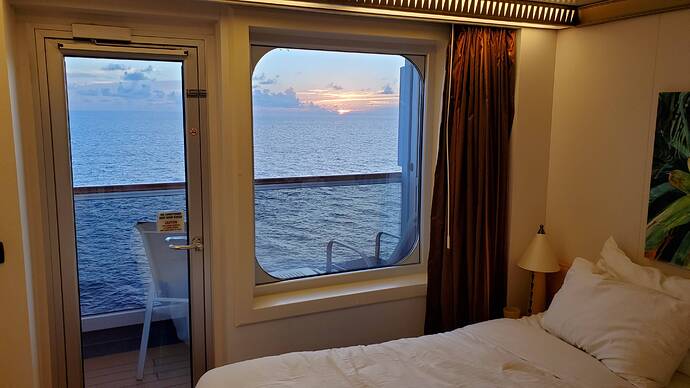 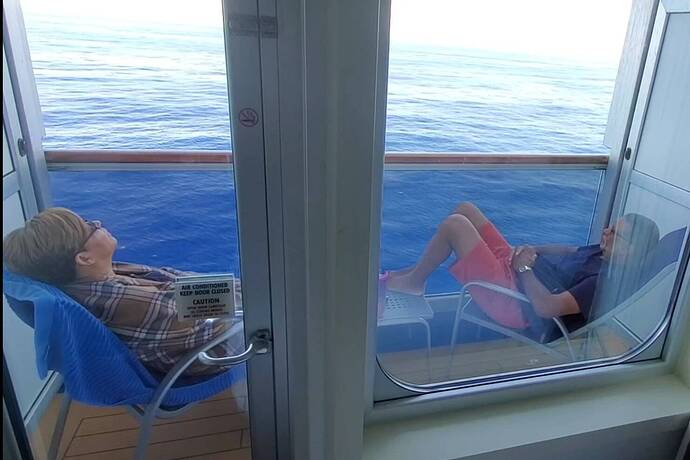 The ability to pan with my right mouse button, and control the aircraft inside the cockpit at the same time again.

Proper ‘Hybrid’ mode that works so the majority of the world can see hectopascals and degrees in everything (including ATIS!

Proper tailwheel Centre of Gravity moments so that they try to swing you around as they should. Tailwheels do not stay straight with no input.

Animated passengers in the cabin (small idle movements) and visible inside and outside the aircraft according to the W&B.

Integrated multi-station cockpits/cabins. Get a group of 4 up in the plane for example. Or have multicrew operations for any aircraft - instructing, airline ops etc.

Door opening on all default models.

Fix that horizon line through terrain! It’s been 18 months!

Separate XBox and PC settings at least, even if the engine and world remain the same. Tree and autogen draw distance needs to be increased like terrain has been. Make them all able to be set even higher, moseso than current tech allows - future proof the sim!

So many more to add…

rain effects in another sim, wip : 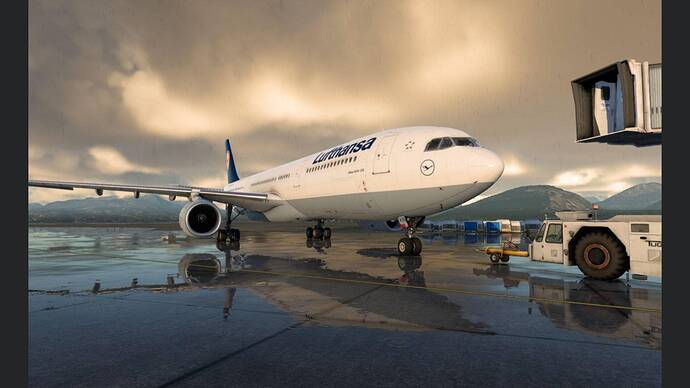 Live traffic only arrives and cannot leave the gate.

Nav/recognition lights disappear as soon as the plane touches the ground.

Live traffic is not always available.

So, to quote your own words:

I don’t know what you’re talking about.

I’m hoping hoping for a fix for the nearly completely unresponsive Bravo trim wheel. I kind of wish they’d address that immediately with an interim update

cloud color mismatches are what I want most to be fixed. The mix of pinks and purples and blues and bluegreens and yellows should go away. I’d like to see cloud textures improved – too much blurry and blobby textures at the moment.
When I was making clouds for previous simulators, I found that wispy clouds could best be made by using Highlight, midtone, and shadow to drop out unwanted parts of the image and then copy and paste the result onto itself using addition with varying transparency. I wish I knew what they were doing cause it looks like its just collections of textures.
Check out the square cloud closest to the text in the following image. Surely thats just one texture whose outside boundaries were quickly erased. Highlight Midtone and Shadow would work wonders there. 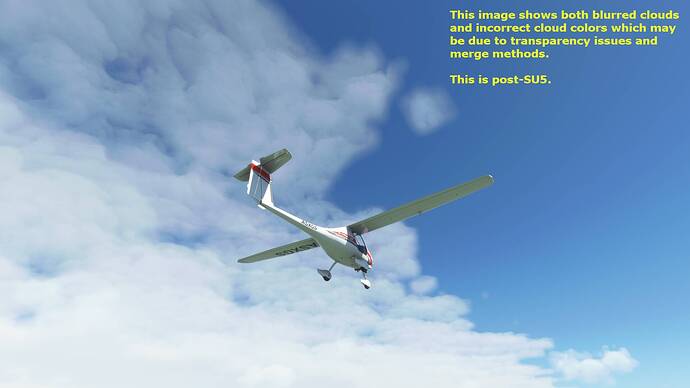 They did say during this weeks dev Q+A that technically they can display a lot more live traffic of whats available but for performance reasons its throttled back to where it is currently. It impacts performance quite a bit to have it higher. I think they did say they would open things up a bit and allow more to be rendered. I wish they could have a slider for that so we can choose of live aircraft that are displayed, similar to AI traffic, ships and ground vehicles. Maybe thats more technically difficult than it sounds though

They also said they were currently signing contracts with various airlines to get use of official liveries in the sim (finally!) I’m guessing that will be a gradual roll out though.

Lots of live aircraft rendered with the correct aircraft type and livery will be fantastic when its done correctly in the sim. The various mods that are available do make a huge difference, when they work correctly.

You said offline AI is broken. That’s not offline AI you’re talking about.

Unless that was a typo.

Nav/recognition lights disappear as soon as the plane touches the ground.

They fixed that with SU6.

Live traffic only arrives and cannot leave the gate.

I mentioned that in the post you’re replying to.

The sim only renders live traffic within 30-40 miles. If you’re in an area with high density traffic within that kind of space you’ll see quite a bit. I’ve had up to 15 before.

Busy airports will get a lot. KDFW, KATL. Even RJTT

My apologies. I was referring to live traffic.

However, they didn’t fix the lights, which still disappear when the plane lands, unfortunately. I nearly ran into one on the taxiway yesterday when doing a night flight.

In vatsim, the nav lights do not appear at all on other planes.

Offline AI is broken though, as you say. Not least because for some reason it does not show in VR. I’ve checked and double checked the settings, which are correct. It shows (and sometimes works, badly) in pancake mode but not in VR.

I honestly do not know if air traffic is a priority for Microsobo. Jorg made it pretty clear in the latest q&a they were not going to spend resources developing offline AI and right now, night flying is dangerous when operating ground procedures at night.

I agree with everything you say.

Not sure though that Microsobo are really interested in air traffic. Flying airliners out of or into busy hubs seems to be unimportant to them.