What do you expect in SU6

Agreed! Day one was perfect. Gaming on pc and i’m pretty sure the graphics has been downgraded. Fps was pretty decent to

they must upgrade graphics, it’s horrible how things are looking now

If you read the rest of my post it means returning the graphics to the way they were before the Xbox downgrade. I’m looking at screen shots I took when it first came out and you have to look twice to verify it’s not real. Compared to now, the screenshots look like a game even at high resolution. I can’t quite figure out what it is, whether it’s the lighting or shadows, but it just doesn’t look the same as it did before SU5.

I expect general instability immediately following the update followed by a “hot fix” (I don’t think the devs understand this term. Having to quit the program and install a patch is not a hot fix).

I expect most 3rd party add-ons to have some bugs introduced. Some will never be addressed, if you purchased through the marketplace an update that may or may not fix the problem may become available a week or two before SU7 where something else will be broken on the same product.

Queue “The circle of life” from The Lion King.

A fix for the CTD bug making the game unusable would be a good start but I’m not holding my breath and fully expect the game to continue CTD on loading into menu till the next major update after Christmas.

Ok, how do you suppose the Asobo guys know what exactly has to be fixed, if you don’t raise the exact issues. To me it looks like the Xbox release, contrary to what you say, is the real culprit for you, and not any real graphical degradation to a level you say happened. We had the aggressive culling issue, that was already fixed. That was blamed on the Xbox release, yet they gave us the option - only on PC - to crank it up to the level our systems can handle. Then we’ve had the tree LOD issues, which I personally wasn’t even seeing, but was actually real. Now they are fixing that one as well. What exactly needs to be fixed more in the graphics to bring it back for PC?

Going by your claim, there must be something wrong graphically caused by Xbox release in this picture that must be fixed? 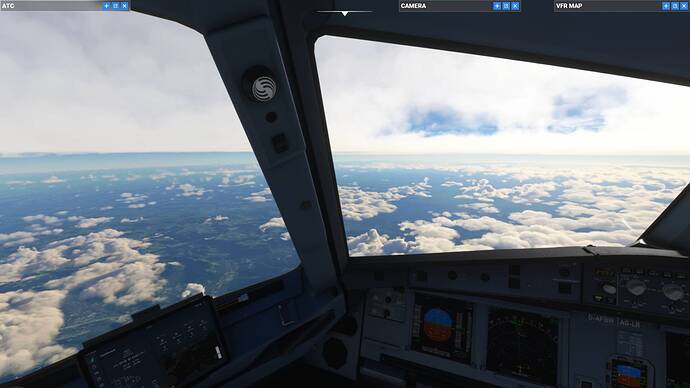 I’ve put off my young trainee pilots next “lesson” which was due on Tuesday evening. That, of course, is when the update will hit the UK and I fully expect download problems - unless they’ve fixed whatever got mucked up last update!

TBH everything seems to be running just fine for me for the moment, good FPS, smooth graphics of acceptable (to me, I’m a bit GPU-bound) quality and of course no CTD, stuttering or anything like that. I’ll be happy if it stays that way!

And not introduce new bugs in the process.

If you’re referring to jets, I recently found a fix where if you assign the extract and retract as separate keys, and do so on the right column instead of the left column, that fixed my ability to open/close the spoilers.

I play FS in 4K and lights are just round pattern

They got 9/10 most populated US cities, 49/50, they just need to fix one city, Dallas, and of course fix/add new features and then people can stop complaining about Dallas not having detail.

As someone that uses this sim daily, I would be very happy if they just cured the current issues before adding more content. My own main issues are as follows, although not exhaustive.

In the air, I would love to see pale contrails on a moonlight night, rather than thick black smoke pouring from the engines! It would also be good to see lights on other traffic, so when the AI co-pilot states ‘Have the traffic’ you know that it can actually be seen.

Sack the present ATC controllers that bring you down to 3500 ft, 50 miles from the airport, then at 20 miles out instruct you to climb to a ridiculous altitude!

On the ground, allow you to taxi to the pre chosen gate / ramp. Have security prevent juvenile joy riders from taking airfield vehicles and driving them around in front of moving aircraft, causing you to hold position until they have finished their pointless manoeuvres.

This is just a small list of present niggles, but they need dealing with.

If I took my car to a garage to fix an engine problem and two damaged tyres, I would be more than irritated if, after a few months all they did was add some fluffy scatter cushions for the rear seats to make it better!

What do you expect?

The way to identify what really happened during CTD. Like extended logging in example. I don’t blame ASOBO for CTDs. ■■■■ happens. But I blame them for lack of ability to identify the reason.

Only thing I expect is improved night lights( removing that sepia mask ), other than that I’m pretty happy with the actual status of the sim.

And i also expect when you in the free view in the cockpit and try tu turn left or right that the airplane dont turn in the direction like crazy in which you would like to turn. And fix these missing taxi way line to the Gate on all airports

I’ll be happy if they just stop the slight freezes as scenery loads in, and that’s with CL14 ram @ 3600MHz so I hate to think what some of you are experiencing