What I did to make my sim look great

Contrary to a lot of posts on here I actually think the sim looks and feels superb and I love flying it every day. Sure yes I did have my share of issues at first with some of the graphics but bit by bit I fixed them and now it looks great. So here is what I did which in the end is actually very simple. First off I should say that I have an i7 4770K @ 3.5GHz. 32GB of DDR3 RAm and RTX2060 running on a large screen TV at 1080. The sim is installed on a separate drive to the OS.

In the game settings I have set the frames to 30 as this takes the strain off the sim trying to force more pointless frames at the expense of quality. Motion blur and bloom is off.

Then I created a 50GB folder on the same drive as the sim for my rolling cache. This made a big difference to overall smoothness as everything is being read off one drive.

In the Nvidia control panel I set the colour to Nvidia then the Digital Vibrance to 70% which brought out the colours without going too far. See screenshot.

Then finally in the Nvidia control panel after much tweaking I simply set the game to Nvidias own default settings as seen in the screenshot. This had the immediate effect of curing the horrible cloud textures that many have complained about and now I hardly see them at all.

I now get a very smooth sim at high/ultra settings with no shimmers, blurring or weird cloud textures. Everything is pin sharp in the cockpit and on the ground. After a lot of experimentation these simple settings has made my day. Would be interesting to hear about anyone who does the same. 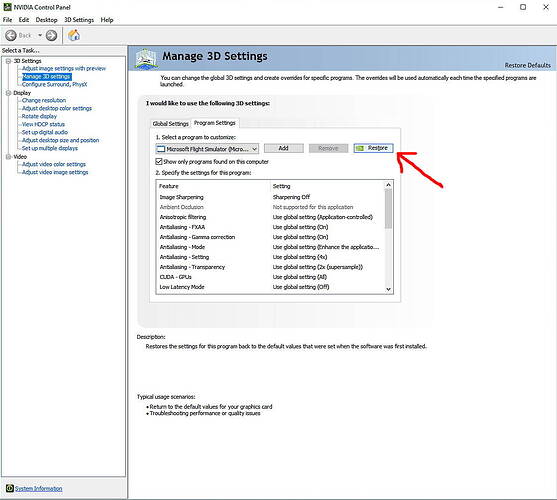 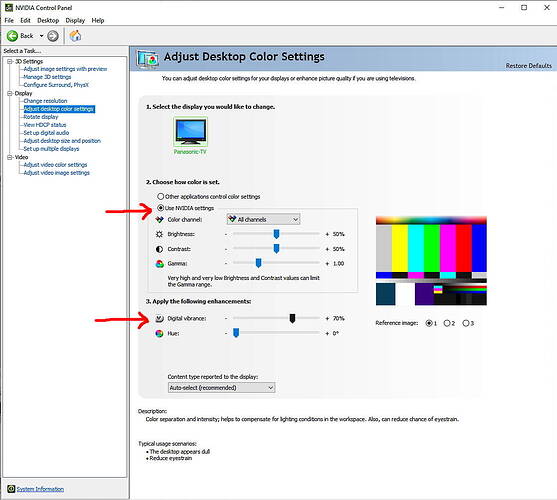 Back to default setting in control panel?

thinking of trying that out.
I have modifications done in there and I’m happy with the results but I mean if it helps out even more then why not

In the game settings I have set the frames to 30

@DistinctSphere5 You forgot to post some in-game screnshots so we can see how it looks.

Thanks. I cannot see any reason why setting it to 30 would result in 15 unless you have something else going on. It is simply telling the sim not to bother getting more frames than the eye can see so it can spend more time getting the quality right. Smoothness is more important than trying to get 60fps. A smooth 20fps is usually good enough for the human eye. With the rolling cache on my game drive I get very smooth frames even at low level over New York with the settings on high/ultra.

In the NV control panel do not use ‘let application decide’ or the ‘quality/performance’ slider but use the 3D settings then as I show above use the NV default settings for that particular game. I am surprised that MS don’t suggest this when the game ships to be honest. It’s why NV have a list of games in there with their own settings. As I mentioned above it worked for me and I get none of the issues some are getting but obviously other factors come into play as well. I think it’s just a case of someone trying it out to see how they find it. The Digital Vibrance stopped the dullness too.

As for screenies yes sure I can post some later. Cheers.

I cannot see any reason why setting it to 30 would result in 15 unless you have something else going on.

I think that’s an relatively old “bug”. JaysTwoCents pointed out that Vsync / frame limiter gives you half the set values max some months ago and it matches my personal observation. It’s recommended to turn off both.
Not sure if that is tied to certain system configurations or something.

Ah OK I already had VS turned off so maybe that’s why it’s ok for me.

First of all, i appreciate your post trying to help the community in this contest of smoothness and overall sim-play.

Then I created a 50GB folder on the same drive as the sim for my rolling cache. This made a big difference to overall smoothness as everything is being read off one drive.

This one sounds interesting. Could you please describe a little more about the process of that folder creation?

Sure, I created a new folder on the drive I have the sim and called it Rolling Cache. Then in the game I deleted the existing rolling cache contents which are created on C by default and pointed it towards my new folder. It then took a few seconds to convert it and that’s it. Personally I found a much smoother result in loading scenery. I made mine for 50GB but you can make it whatever size you want and the bigger the better. Hope this helps.

I cannot see any reason why setting it to 30 would result in 15 unless you have something else going on.

I had the same and did something that cured it. But I can‘t remember what it was, unfortunately. But there IS a solution.

Thanks a lot! How did you changed the folder’s memory size?

In the game settings under data where the default folder is shown. You just point it at the new folder and make it that size that is required. There is also the option there to delete the contents of the default one.

For me it was setting it to 60 FPS or turning off VS.

Your global Nvidia settings were screwing up your image(forced FXAA, enhanced AA, AA transparency, etc). Generally, you should never alter these settings from their default.
Framerate and colour correction are personal preference. Locking the framerate does not increase image quality, just perceived smoothness. I agree consistent is better(I like 45 personally).
You should have everything on the sim installed to your fastest drive for best performance.

I didn’t have global settings on but adjusted the individual settings under the game NV settings. Changing them back to the default NV settings for that game fixed the issue with the clouds and flashing scenery etc. I agree about having the sim on a separate drive (mine are all SSD anyway). People have complained about the sim looking dull - again this can be down to monitor settings but for me increasing the digital vibrancy brought out hidden colours in the sim.

I set the digital vibrancy to 70% and I swear it looks much more alive with colour.
Flying over the Scottish Cairngorms during the day, and the sim looks absolutely stunning.

This is useless without screenshots…as looking “great” can be very subjective when it comes to this particular sim.

JaysTwoCents pointed out that Vsync / frame limiter gives you half the set values max some months ago and it matches my personal observation.

Same for me. I struggled with frame rates for some time at first. Setting to 60, I would see a max of 30. Setting it at 30 would net me a max of 15. Then I saw JayzTwoCents video and it all made sense.

Since then, I’ve disabled V-Sync and no frame limiting and with some tweaking to other settings, I’m typically in the 40-45 fps range most of the time, and down to 25-ish in really busy areas like KJFK or KLAX. In any case, it’s quite playable and not a problem.

Indeed, I like 60%! And gamma slightly to the left. The approach to NewOrleans was breathtaking in broken clouds, glimmering water …

Also, did someone compare using the internal render scale vs nvidia DSR yet, regarding performance and graphics?