Will some sale ever come?

I’m just waiting for a sale, since 70€ are too much for me.
Will it ever be discounted a bit on Steam?
I think MS and Asobo just made the big cash the first week, so why don’t make a small discount to make some more huge cash, from those users that would buy it for a little less?
What are your thoughts?

i paid 120€ (premium deluxe) and it was all worth it imo if you take into account the whole sim scale but thats also depends who you ask.
i agree that at least that time since the launch we havent seen any discount yet which is kinda suprice

if you can’t spare 70, then maybe the Xbox game pass will be more up your alley?

What are your thoughts?

That I would feel ripped off if I paid 120,- and it would already go to sale now

If you’re low on cash, try the game-pass for 1,- for the first 3 months. Can’t really go wrong with that.

Well I don’t feel ripped off. Some are just less impatient and or have unreal expectations from new ground breaking product. That’s the way I see it. I mean yeah i think we all see things that need fixed but if you know what has gone into this and how they are still trying to get it working I think you “should” understand it will take some time to iron out everything.

Well I don’t feel ripped off. Some are just less impatient and or have unreal expectations from new ground breaking product

That wasn’t the point I was making. Please read the OP

The point was if it would go to sale now already after just half a year.

Just a tip. Research which planes you get in the version you intend to buy. Don’t buy with a view of upgrading to a higher version later, as it is even more expensive to upgrade than to buy the higher version.

Probably a harsh question but… What did you pay for your hardware?

That varies on each indivdual…hard core simmer would spend literally thousands of pounds…but if its your first sim start off small and expand. Just have the suggested PC requirments to start of with, a cheap joystick. I personally have spent thousands of pounds because its a hobby…but you dont need to spend a lot to start off…My rig cost me £4500, with discount 7 months old and my GPU is not top range, not including all my peripherals, but I use it for other games not just my sim, and I have set it up so I can use my pc to play games as well as use MSFS 2020. 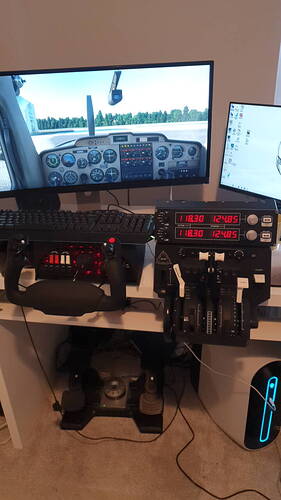 Speed brake and jet throttle levers with a 152?

Lol yeah (I have put speeedbreaks on my Cessna, and two rolls royce engines) no seriously I was only initially setting it up, took the pic for a friend to build me a tray with clamps for my keyboard trying , now got shelf and clamps to slide out, so I dont have to put the Alpha and bravo away when I am doing other stuff.

I prefer not to think about how much the total cost of my setup is. There is always one item I feel like buying.

If you’re new to flight sims and money will always be tight, I would suggest starting with FSX, for £20 it’s great value, with masses of free add ons and probably a less buggy experience.

I’m not a hardcore simmer, even though I’ve played plenty of flightsims over the years (since the early 80s), and I generally will wait for a sale to drop a title to <£20 before buying a game these days, but I was happy to pay full price for the standard edition (on Steam).
I would doubt that, given the ongoing development, we’d see a noticeable discount on FS2020 (famous last words!)

Yeah, it’s a slippery slope once you get sarted. lol

MSFS if my first serious sim. At launch, the only flight gear I owned was a cheap Thrustmaster T-Flight HOTAS for playing random flying games. Seven months later, this is where I’m at… 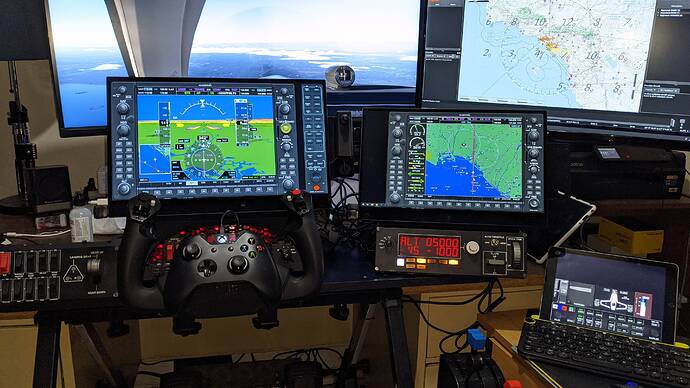 google CD key. standard = ~50-55 €, the extra versions are not really worth the extra money unless your wallet is ok, you need to buy a EU one if in EU for your connection.

At Amazon.DE a MSFS Standard DVD is 60 EU at the moment