There are far too many windmills in California windfarms. I have disabled all add-ons. My guess is there is a file duplicated where it should not be. Pics attached are from the Tehachapi Pass between Tehachapi and Mojave (KMHV) Altamont Pass between Livermore and (KVLK) and Tracy (KTCY)The same issue occurs at other windfarms as well. 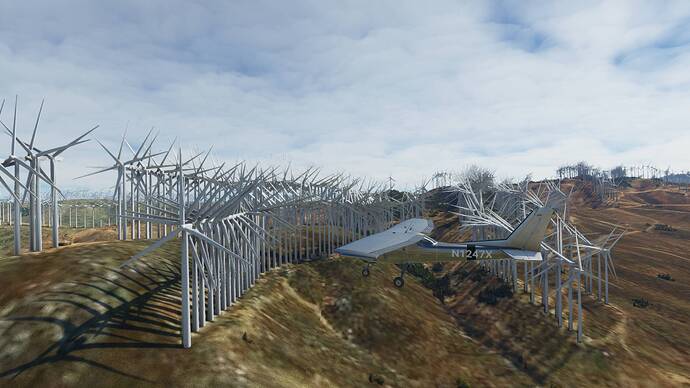 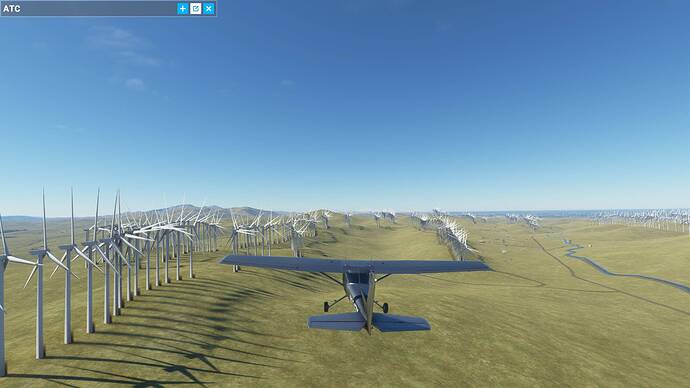 Please note: All my third party sceneries and libraries are disabled.

I’d love to see a fix for this.

I’ve seen the same at various locations around California (may or may not happen elsewhere too).

Seriously, I looked at part of the Altamont Pass windmills using Bing Maps and Apple Maps. It appears a lot of windmills have been planted. I have no idea how the windmills from the satellite images are translated to MSFS scenery. Clearly it isn’t 1:1.

The population density of the turbines is correct, the problem comes from the fact that MSFS only uses one model for them while in reality there are taller and shorter turbines close together https://upload.wikimedia.org/wikipedia/commons/b/b6/Tehachapi_wind_farm_3.jpg
In other words, the sim knows where the turbines are but not their size

Not so. That image appears to be taken with a telephoto lens which tends to compress the subject matter. Compare that to my screen shots. In MSFS, there are too many turbines that are packed too close together. A 40-50% reduction would look more correct.

Yeah, that Tehechapi picture wasn’t a good illustration, but the point might still be valid. Zoom in here, and check out the rows of the small turbines and imagine how they would look like if replaced with the big ones:

Gigawatts of power produced there! Renewable energy is the future

Not only are the windfarm overpopulated, but the world seems strangely devoid of any other tall structures requiring lighting. These are clearly marked on publications. If anyone is using MSFS for familiarization, this is missing IMHO.

Off-topic, but yeah, San Gorgonio would give gigawatts if all their turbines were in the modern megawatt-class (looks like the 3200 or so turbines average about 0.2MW each). Not sure how’s the wind there, though.

The turbines look to be where should - you can check this with Google Maps. The real, tiny scaffold-propped turbines have separations of about 15m (so a bit more than the 172 wingspan) and are in a weird triangular mesh formation (enable sat imagery):

The MSFS photogrammetry fits as well (Cub for scale): the white spots are the footpoints, and you can see the turbines in the imagery (better from the other side, though) 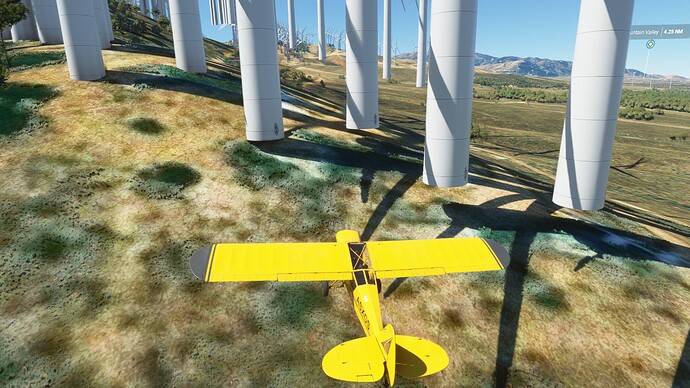 It’s just that the mills are waaay bigger in the sim than the old tiny things in reality.

Edit: And yeah, they’re floating… and you can’t collide with them, which is fine, since those boys are so thicc that threading through is unnecessarily hard.

Even though the wind farms are overpopulated and too bright at night, I’m pleased that the turbines react to the wind correctly. I created a 50 mph wind zone and the turbines were spinning like crazy. The sound of the blades is linked to the speed as well. IRL I think the turbines have clutches to disengage the turbine if the wind speed is too fast.

Having been to a number of these wind farms personally, I still contend that, though the turbines may be too large, there are also too many, packed too closely together in msfs. Look how close the bases are to each other. Looks pretty unrealistic to me.

You don’t have to trust MSFS. Google imagery (e.g. see above) agrees that that is correct for those old, tiny windmills and that the MSFS imagery and mill placement is correct.

Also, NB that my Cub above is not on the ground, it just about fits in between those huge stalks, which again agrees with the Google measurements.

I trust my own eyes. I’ve been to both my pictured wind farms and know what they look like and have an idea how the turbines are placed IRL. BTW, in the Altamont pass, they are anything but “tiny old things.” Thank you for sharing.

I don’t mean to be dismissive of the windmills or the wind farms (or your experience) - there is the subset of smaller, older turbines at the sites, and compared to the (I’m guessing multi-megawatt) monsters shown in MSFS, these are just dwarved. As it happens, the Altamont wiki page points to the possible model:

The wind farm is composed of 4930 relatively small wind turbines of various types, making it at one time the largest wind farm in the world in terms of capacity.

Altamont Winds Inc (AWI)'s 83MW of 100 kW Kenetech turbines are being taken down. These are older models with lattice towers.

and the Kenetech turbines seem a likely candidate for the smaller ones at Tehechapi as well: 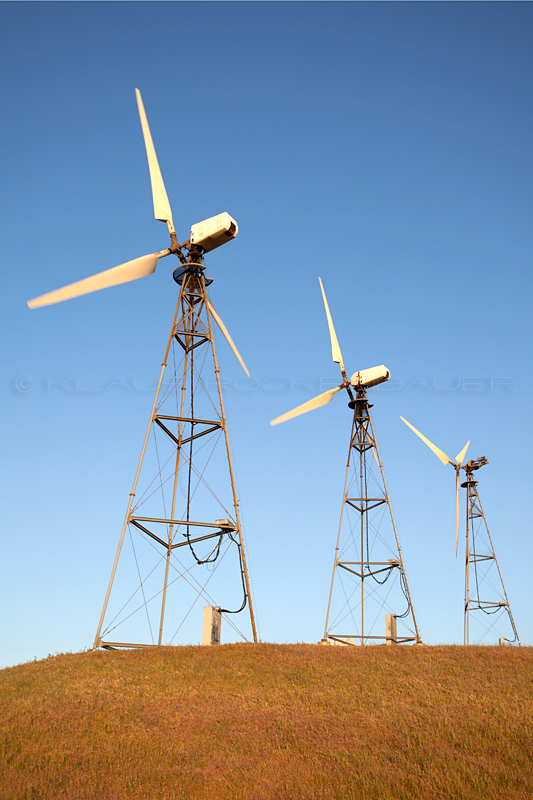 They look to be 17m diameter ones, and on a similar lattice tower, which would, again, make them a reasonable fit for the spacing and imagery you can see from maps - not much wider than a Cessna wingspan, unlike the ones now clustering the hills in MSFS.

Look at the pictures on the Wiki page and notice how physically far apart they are. Then look at these again. 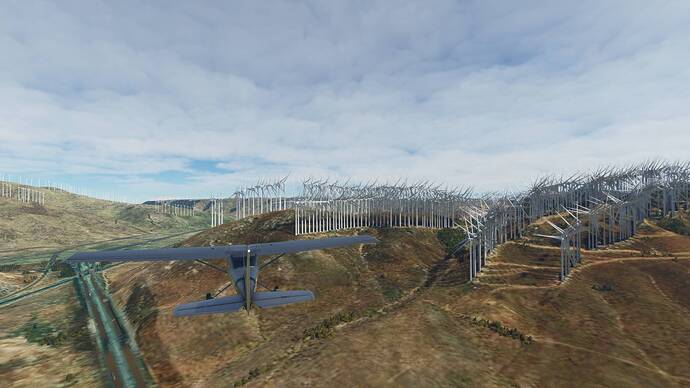 If those screenshots are from Altamont Pass then I think it’s placing them where old much smaller ones used to be. Looking at the satellite view of google maps there a section with just foundations that are that tightly packed. If they are just using AI to place them then it’s picking up all those foundations for the location, or maybe they are using a database of windmill locations that is very out of date.

. I agree, it looks really wrong! But we can count the mills from Google maps, and see that there is a correct number of mills (and I’m actually suprised how well these are picked up by the AI!). It’s just very wrong mills for those rows.

I looked up now the same spot as your second screenshot, and counted: 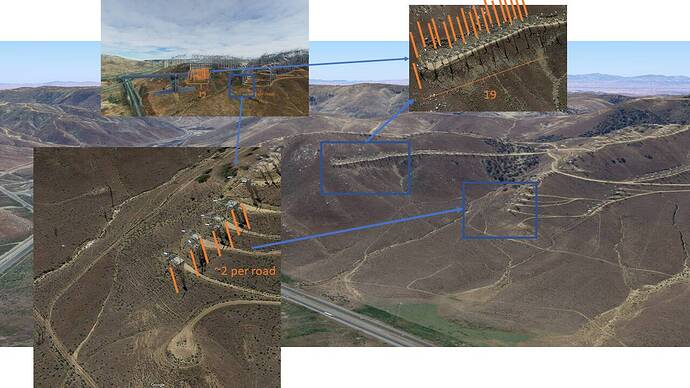 tehechapicounting1280×720 136 KB
(hopefully the jpeg is still legible!)
A) the mills on the ridge just above your right wing, up to the gulley. MSFS has 19, and counting the mills from Google on the same ridge also (but I’ll admit it’s hard to say if it is exactly 1-to-1, but it is close!).
B) The closer ones have ~2 mills per road, which also fits (but maybe is more obvious in your first screenshot).

THAT is how it should look.

This one is also a real world image (and I’d lean to saying that the images from Google Earth also are at least based on reality): 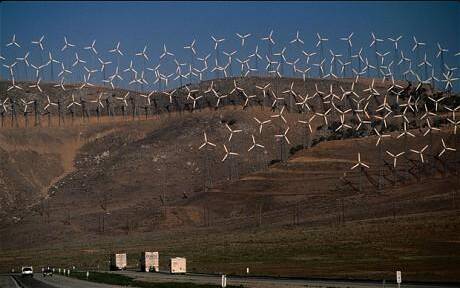 from Tehachapi Wind Farm. I like how the mills next to each other are at different heights to get less interference. 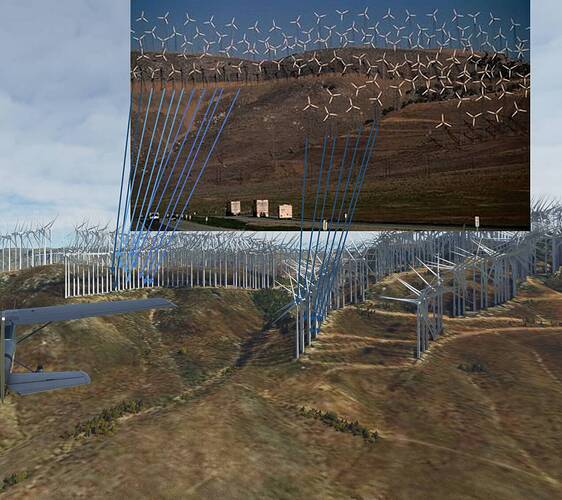 The mills are just ridiculously big in MSFS for these locations. Of course, I can’t comment on whether or not the imagery is up to date, but it looks consistent to whatever there is.

And I agree that having Asobo/Blackshark put in a filter for windmills that removes mills that are closer to each other than wingspan of those mills would be a good, quick fix. Better would be to scale down the current windmill size where needed (edit for eyeballing, here that would be a factor of 1/10 or so?), and the best one would be to have the a few windmill models to show those latttice stands with correct propellers.