That is the impression I was getting, but thanks for confirming. I am totally new to consoles, and am just learning about this topic. I did read that Xbox recently dropped the Xbox Live requirement for free-to-play games. That made it even harder to understand why the requirement remains for paid games, and especially for a $120 simulator.

Maybe console gamers have accepted it, but I suspect PC simmers looking at Xbox will have a harder time doing so. In my opinion, Microsoft would be wise to remove the requirement for this particular title.

dont forget many xbox gamer are using gamepass - so they can play online without any charges and Fligh Simulator Flight Simulator is in the gamepass.

Hi gang, I’d be interested to know what fellow Xbox simmers make of the latest patch. I’m seeing some possibly significant improvements to colours and lighting.

I’m also seeing a big improvement in overall smoothness which has gone a long way to addressing the issues I was having on descent and approach.

I cannot believe how good this looks on my Xbox. Just completed an approach to Marseille over southern France and my jaw was on the floor over how pretty it looked.

Guys I need some help from the pros. I’m heading West toward POI 5 at a heading of 287 degrees toward the landing strip SCAZ, my position is correct on the VFR map so why is the pink line on my heading compass directing me to the East away from my correct destination? I haven’t been able to use the horizontal situation indicator since Leg 4 which is when it got all backwards. HELP! 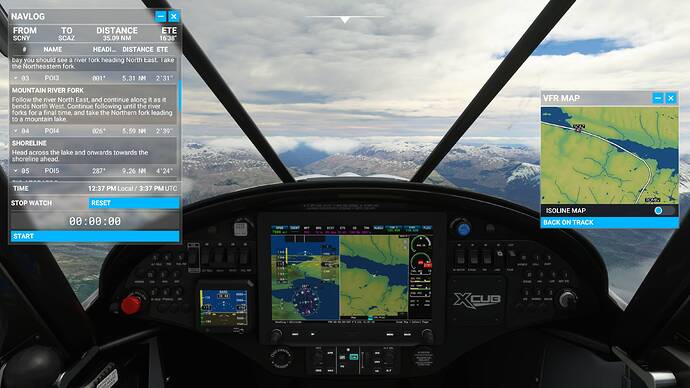 Thanks. If any of you want to report to Zendesk as well, that would be helpful. There’s only so much I can do.

Thanks. I did report the degradation over longer flights / during descent and approach. However, this seems to have improved significantly since yesterday’s hotfix. I’ll need to do another couple of longer flights to be sure but initial signs were promising.

I’ll cross it off the list when we know for definite that things have improved.

I cant give any technical stats or anything but I’m running a XSX on a 4k gaming monitor. Flying my C152 through the mountain ranges up from west Sale to Hotham was incredible last night. Never looked so good. Even with poor Internet, the clouds, trees and volumetric lighting just added so much depth to the visuals. It was wicked. Very happy.

There’s no backcourse mode on the cub hey?

Could just need to re-input the direct to function, as it might still be trying to direct you to an earlier established direct-to line. If that makes sense

Hey, thanks for adding the HDR bug on Xbox, shouldn’t be too crazy of a fix for Asobo to implement.

Also not sure if you can add these issues to the thread either, but all the Xbox Official Peripherals are having issues on the Xbox, both the Thrustmasters T-Flight HOTAS ONE, and the Razer Turret Keyboard. Since these issues are Xbox related/only, it might be a good idea to keep track of them.

Default keyboad controls on Xbox Series X are unusable with with a Razer Turret keyboard. Most basic flight controls such as pitch, yaw, roll and engine management are bound by default to the number pad. The Razer Turret, a “Official Flight Sim Accessory” according to xbox is not designed with a number pad. Rebinding keys for basic flights controls and rebindings for the replacement is proving time consuming. Is a setup wizard possible? Or a dedicated option for Razer Turret users since it is t…

Yep I’ve got the same problem…. I really hope it’s sorted out soon

I was all psyched to get seriously into the game, but trying to do all the training with messed up inputs is a pain in the a** So now all I’m doing is goofing off in game.

Hope these issues could get added to the list as well.

I still have the Long Haul Problems, particularly with the 787. It will stutter and then it will completely crash.

We’ll I followed it for a time to see if it would eventually line up but unfortunately it did not, seemed it was leading me to the previous waypoints so I continued on using landscape and geographic landmarks to find my way following the line on the VFR map. If this could be patched next update that’d be great.

Has anyone else noticed an issue with night time flying? I get random color flashes everywhere it’s dark on my series x. It randomly changes colors but happens about every 5 seconds in the same spot

Hey - running on X Series X, I get very regular CTD on the World Map screen.

Strangely it seems to always happen twice - as in boot game, go to map screen > CTD, repeat > CTD, repeat then it works ok. It wouldn’t be so bad but you need to sit through two instances of the software loading again, so each time I’m looking at a 7 minute delay to get in the air.

Adding this because I didn’t seen in updated list of known issues but think it must be fairly common.

I’m on the XBOX Series S and haven’t encountered a problem… it runs really smooth and I am incredibly happy with the result.

Would be great though to have AI traffic improvements - the airports seem dead with little AI traffic (not sure if this is because I have “live traffic” on or not. Also, it would be great to have some actual liveries in the game.

Another minor suggestion - it would be great to save your callsign and flight # instead of having to re-enter it each and every time you enter the world map.

Otherwise, I am really happy. Am astonished it works so well on my Series S.

I have frozen once while on world map. Only time I’ve had a freeze on the game to be fair

With you regarding liveries, I’m not sure if this will be possible on Xbox due to copyright etc, hopefully though. The AI traffic definitely isn’t right, although I suspect this probably helps keep the game running stable on the console, especially around busy airports and cities.

The issue with HDR is that it’s set to 10000 nits peak brightness, it’s too bright, blowing out highlights. No consumer TV is capable of 10000 nits, we need an in-game calibration tool to set our own peak brightness level. HDR, Dolby Vision look awful on my OLED at the moment. I’m also noticing more framerate drops while using VRR at 120Hz.