I’ve been waiting for this one since it was first released for PC. I’m on Xbox Series X and have done a thorough 1 hour test flight with LNAV and VNAV and it worked flawlessly. Very happy with it! Didn’t encounter any problems or anything not working as I’d expect based on earlier reviews of the Kodiak on PC.

Re an earlier post, I was able to add virtual passengers and cargo in the plane after starting the flight and using the fuel/payload menu by entering weights into the various rows.

Second flight, was able to add passengers (had the wrong aircraft the first trip). Flight went well.
Passengers don’t look so thrilled with the pilot, 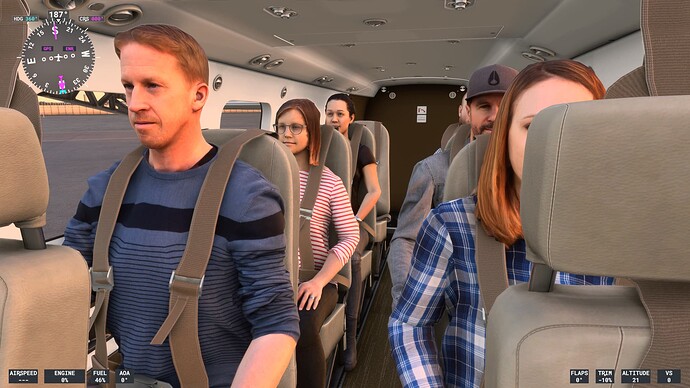 One small bug or maybe I’m missing something. My glass panels are on during the day but as soon as it’s dark the panels shut off?? What am I missing here?

One other thing I noticed. With zero throttle I can taxi and actually need to apply brakes as you move at a fast clip. This does not seem right.

■■■■■! that’s an unexpected and amazing wake up today

It looks great. Coupled with the WT G1000 (they’ve frankly done a fantastic job in bringing that up to a good standard, btw) and the flight model, this looks like a winner and a compulsory purchase. I’ll wait a few days just because of the debacle that was the DC-6 but the signs are positive.

So far lots of crashes with this plane. Might be related to where you start from.

the one thing i couldn’t make it work was the topo map, after few tries i made it (i hopped in another g1000 plane to check if it was ok there, it was, than back to the kodiak and now it shows the topo map)

It might be sim related as i was having the odd ctd, photogrammetry issues and stuttering in the last two days on pc.

“One other thing I noticed. With zero throttle I can taxi and actually need to apply brakes as you move at a fast clip. This does not seem right.”

That is correct, it is a powerful/high torque engine. You have to really ‘fly’ this plane. Set propeller low and low idle. It will still crawl forward even under those conditions. Also check wind on take-off and apply appropriate (usually right) rudder trim.

It is certainly a more challenging aircraft to fly but very rewarding because of that.

Caveat: I am using PC version.

Pretty sure the propeller is supposed to be on high RPM until climb. Low idle and tapping the brakes once in a while is the way to go.

It shouldn’t be related to where start as I did over 20 loads from different airports, a mix of big city airports like La Guardia to remote strips like Nanwalek and it works sometimes, other times didn’t to pretty much the same extent

Do you recommend Kodiak over Islander? Not sure which plane should I choose.

That’s a tough one. Islander is nice and weighty and performed well on Xbox.

Don’t envy that decision I ended up getting both in the end. Both are well done by great devs

If ignoring the current instability issues which will be fixed, I’d easily go Kodiak. It’s the only plane so far actually made in partnership with the offical company that I am aware of and the system depth for a GA plane is amazing. Its extremely fun to fly too. Both are really nice planes in my view but I’d go Kodiak over Islander anyday myself but obviously it depends on personal preference really

they’re on a completely different level

Thx guys. I’ll go with Kodiak. Does it turn better on the ground than Cessna 208?

yes a lot better, turns on a dime. if you like the 208 you’ll love the kodiak

Being a former xboxer im made up the xbox community is finally seeing planes and liveries.

It keeps crashing for me most of the times. Reinstalled plane, restarted Xbox. I am now at 2x working and 15x crashing.

I have no crashes lately just with the Kodiak now. Need to test other planes today to compare