Found a workaround on the net. Start your flight, screens ar blacks, register the flight, select the flight just registered, open the flight, normally it’s good (for me it works)

I had a great period of no black screens sadly they have now started again on the S.

Even on shorter flights.

It’s so random. Tried so many things. Obvious and not obvious ones.

I’m sure MS/Asobo are of the opinion that Xbox simmers aren’t generally going to be flying for long or mostly do external view GA type flights.

Can’t see any reason why they wouldn’t otherwise have dedicated resource to fix the issue.
Even if complicated 6 months plus is excessive.

Now they seem to ignore the issue. Lol.

I just landed at KMIA from PANC and after 6hr i had the black screen issue after landing but they turn on after a few seconds. Not sure if they are working on it but this is a good advance!
Video

I just had 4 black screens and CTDs in a row. They were all on final approach (300 feet) and after landing the game crashed. It happened in Chicago, Atlanta, jfk and Orlando, 4 major big handcrafted airports. It seems that the black screens happen when the game needs to load in a lot (Updating live weather, big airports, etc) Thats probably also why it doesn’t happen at 36000 feet but on final approach.

We over at the sdkdev community have been experiencing these issues but a lot faster when working on complex airports over a period of time (20-40mins). This has caused us to every 30 mins or so reboot the sim to continue work. This week after the Dev Q&A and the heads of development explained they were having issues with use cases, I reached out to them and supplied them with a 45 min video showing the whole issue, and at the end a lot of diagnostic data. They reported back this allowed them …

A lot of folks with the issue are using weather presets instead of Live and disabling live traffic.
Both help to prevent this.

Black screen after 10 hours of flight

Full restart of XBOX before the flight.
After taking this screen shot, I quitted the flight, and the game crashed to XBOX dashboard. 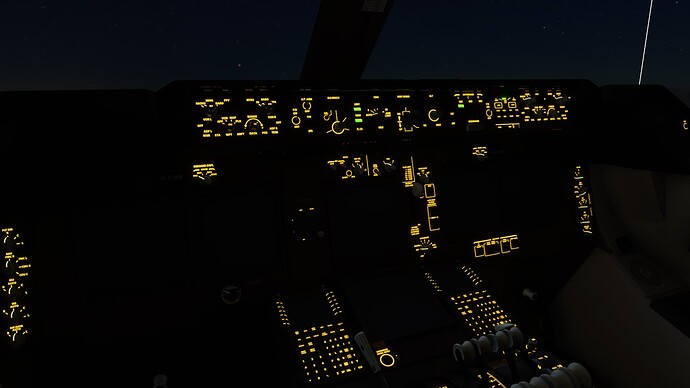 Question for everyone if I may interrupt the usual logs. Nowhere else to ask.

Has anyone successfully replicated black screens?
As in if i follow your same flight plan and settings it’s guaranteed.to occur.

I had a black screen incident on a short hop from EGNT to EGGW. Repeated the same flight identical settings and set-up, immediately and it was fine.

I had traffic off, and preset weather to few cloud’s.

It doesn’t matter what setting they fly with, the error occurs sporadically and is incomprehensible.

So, for anyone who’s participated in SU 8 Beta, Have the black avionics been fixed, reduced or still the same problem? FYI Im not in the beta. Just would like to know everyones experiences.

I have been in the beta since the start and i can say that i didn’t have any problem, just 1 time but they came back after few seconds. For me looks more stable with a good performance.

NO LIVE WEATHER
NO LIVE TRAFFIC

Note: The flight from Paris orly to London Gatwick was perfect NO CTD OR BLACK AVIONICS however I was doing a 1 hour stop at Gatwick and just as I was about to pushback for Barcelona just after I had finished doing the flight plan the screens went black but there was no ctd. This has never happened before so maybe it is a one off but I will keep testing to see if it occurs more often now

NO LIVE WEATHER
NO LIVE TRAFFIC

Note: very good flight overall NO CTD OR BLACK AVIONICS and no choppy frames at any point during the flight.

Do y’all think this update help with our topic?

Bad report After the Sim update 8
KJFK-KDFW
xbox series x
live weather on
live traffic on
default 747
Asobo Handcrafted airport to handcrafted airport
3 times CTD spawning into KJFK
then I re started the console and sim and finally was able to taxi and take off from KJFK to KDFW. landed successfully at KDFW no CTD or black screens. just when I thought all is good, got CTD when pulling up to gate. bright side, it was smooth flight all the way there and even landing. no stutters. I don know what’s the deal with these Crashes on xbox when switching camera views but its not fixed at all. i will test with no live traffic or live weather later

im noticing on xbox with the default aircrafts such as a320neo 747 787 etc are the planes crashing the sim at handcrafted airports and add-on airports. ive tested the 777 cap sim and it doesn’t CTD at all. something is going on with the aircraft and the airports. every time I spawn in the a320neo for instance CTD. anyone else getting CTDs from this?

Hopefully they will finger it out for us