I have been using MSFS on my Xbox series X for the last few weeks, and I have to say that the Xbox series X simply can not handle it. There are so many crashes, stutters etc, that this simple isn’t playable. The Xbox series X is a dedicated gaming console and should be able to handle any Xbox series X game that is thrown at it, without throwing a fit. I have tried a lot of different ways to make it run smoothly, but quite simply, this is a PC game that has been adapted for Xbox without enough consideration for Xbox users. Xbox users aren’t able to upgrade the hardware, as it is a sealed unit, so why release a game that is too demanding on the Xbox series X console. Deleting the rolling cache makes no difference. Increasing it or even removing it (I have 600mb download speed) doesn’t do anything. Turning HDR off doesn’t do anything. It stutters even when ATC and AI aircraft are off and is much worse when they are turned on. Microsoft and Asobo need to get a grip on this and if necessary, reduce the workload on the Xbox CPU and GPU so that it can actually handle the game. Xbox users need there own forum, as MSFS is clearly designed with PC users in mind.

This is in reference to a topic that was closed despite a fair amount of support: Here’s the response I read at the bottom: [Screenshot_20220112-084829_Chrome] If we share the same code, could someone fill me in on why certain aircraft have either been pulled from the marketplace for xbox or delayed indefinitely? How will a subforum hinder the abilities of the developers when we’re already required to list the system in the bug report? I don’t feel the communication disconnect is really b…

I run my xbox series x at 4K 120fps with HDR on my LG Oled C1 TV, only very occasionally see a frame drop since the last update, it’s absolutely solid at 60fps. I use controller, mouse, keyboard and Turtle Beach VelocityOne Flight controller without issue. Occasionally I get the mouse freezing mid flight and very (very) occasionally at CTD but I don’t have too many additional content on my xbox. I’ve read many comments over the months and it seem to me there are either external factors at play or not all xbox are equal in performance / build quality. I’m hoping that come update 8 next month we’ll see further xbox improvements as identified in the recently release plan/ triage comments section.

Where is this? Could you point me to it, please?

I quite often used to wish my XBox X had some graphical options sliders to experiment with, but again it’s another thing that’s locked down.

I’ve had hardly an issue with my Series X up until the last update. I tried out the game on Game Pass when it was first released and I was so impressed that I bought the game. I ran the game at 4K and everything was smooth as silk.

The latest update is when things started to go sideways. Framerate drops, lockups, CTD, etc. I’m of the opinion that the Series X can handle the game no problem as long as the code is clean and the servers are up to scratch. The former as well as the latter are questionable at this point IMHO.

No problem with my Series X. Some scenery from Orbx / Samscene3D, Zinertek enhanced airport, Bijan season and 3-4 aircraft (Junkers and Carenado).

My father use a Series S without DLC (just free World Update), no problem.

It locks to 30 fps regardless of display refresh rate set in the Xbox. However, if your display support variable refresh rate, it will unlock and allow you to go above 30. Although if I remember correctly, this isn’t a user-accessible setting. It just happens automatically in the background.

Then you need a SX like mine as very few issues so I expect…it’s not the Xbox. Peripherals, 3rd party addons, try removing everything and see if that improves anything. Happy new year simmers! It’s great to be back. We hope you’ve had a restful holiday. To kick off 2022, this morning we released build version 1.21.18.0, available now on PC and Xbox.

I don’t think that’s how VRR works. FPS is locked at 30 for FS. VRR just changes your TV refresh rate as an when required.

I’d have to look it up. I found this weird as well. It was talked about in a Q&A, if I remember correctly.

I run it on a Series S without any stutters at all on upscaled 1440p to 4K I guess it is (right?) HDR10 on, Live Weather, Live Traffic. All world Streaming on apart from photogrametry data since it’s ugly on a Series S. I obviously don’t know if there’s any differences in the graphics more than the 4K UHD on a series X by default. But actually I can’t believe that Microsoft could manage to run this thing with constant 30fps on a Series S somehow but not on a Series X.

I personally would guess that you have setup the rolling cache too high. There’s no need for more than 8GB actually and I wouldn’t recommend for more since the new hotfix for SU7 because I had mine on 16 before this hotfix running smooth and after the hotfix I had to lower it to 8 because the sim has started stuttering especially during fog. Since I put it down on 8 it runs nice and smoothly as before. Also delete the rolling cache from time to time. But that’s just a guess, could also be something in your XBX settings but I can’t believe this thing doesn’t run on a Series X perfectly well. Neither did I stumble over any other complains accordingly.

This is what my TV reports…. 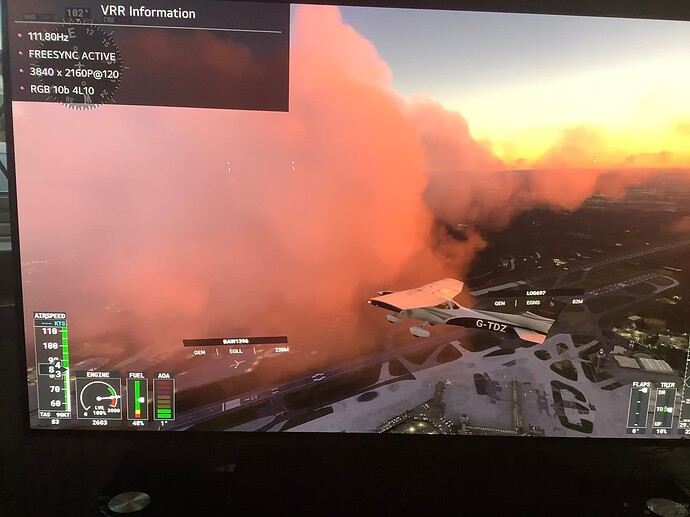 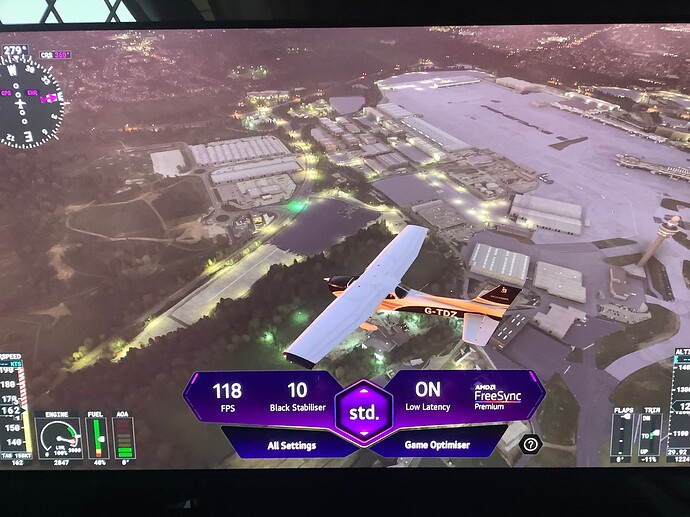 That is just your TV refresh rate not your actual XBox FS output frames per second. I mean not even high end PC’s can output FS at 120FPS at 4K. FS is output at 30FPS locked. and TV refresh rates won’t really matter. They do for other games that run at higher FPS. VRR is just an adaptive refresh rate so that the TV can expand to refresh optimally for games that produce higher FPS output.

Anything below a 2080 super, Graphics card wise would be weaker. There are 3rd party devs making content with weaker hardware than the series X. This game installed on drive that reads and writes slower than an NVMe would be inferior. Windows takes just as much of a portion of your RAM and CPU as the Xbox OS. The fact that drivers and components are all uniform makes optimization to prevent crashes way easier. I dont crash. Uninstall your scenery add ons. Anyone who isnt living under a rock would know these are problems facing PC too.

I’m on Xbox Series X and have had little to no crashes at all playing MSFS. Thoroughly enjoying this sim even though it has its issues, I wouldn’t say Series X can’t handle MSFS.