You wanted a Flight SIM and got the World

It’s 2020, a year that will do down infamy. Literally Hellfire is spreading across the globe and can only mean we officially took a wrong turn deep in the Twilight Zone.

And then out of chard ashes a year comes something so magical, of course it paradoxically has the same namesake, MS Flight Simulator 2020.

You might have come for the white knuckle landings, or the pixel perfect clone of your favorite cockpit.
I’ve been into aerospace my whole life but never a hard core aviation SIM guy. I purchased this game more than anything for what I thought would be a fun sight seeing game.

But when we rubbed the magic lamp something else happened… We expected that warm nostalgic tingling for all the aircraft we grew up watching, riding in, or dreamed about. However, something altogether different materialized out of the mists of this genie.

This is NOT a thing right?

WTF?!! You can really go anywhere on the planet, visit the house you grew up in, with live weather day or night, with real air traffic flying overhead?

It took a hot minute to even wrap my head around it all.

There are wildfires in our area and switching to real-time weather and seeing the smoke filled skies just blew me away. 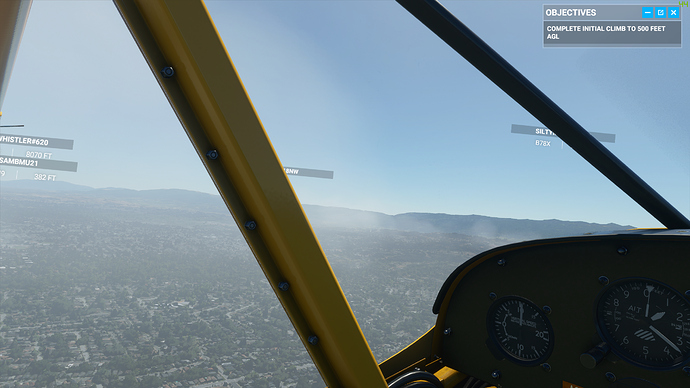 My Brother-in-Law runs a camp for kids where they learn to build wooden boats. We tried to find the spot where he launched his latest vessel. We were amazed when he sent us back our pic, with the exact dock he launched from circled in blue. 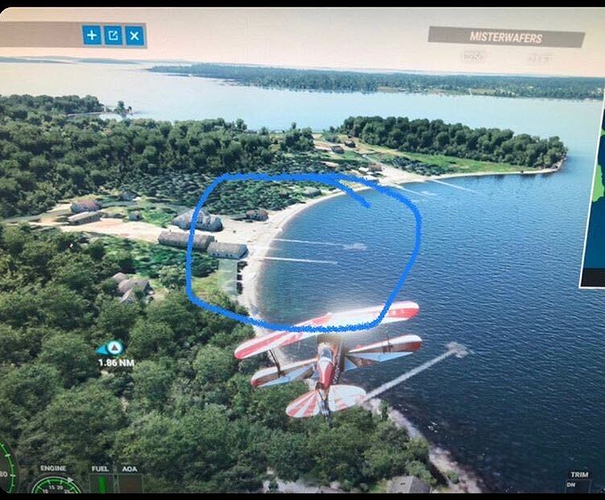 Sorry peeps, this isn’t a game. When you’r streaming hundreds of MBs of real-time photo realistic terrain while you explore, it’s the biggest baddest MMORPG ever made.

Hey Kid You Got the World at Your Fingertips

My son is a geography super geek. Yep, I didn’t know that was a thing either, but apparently they have their own nationally televised “Geo Bee” deathmatch tournaments. Except instead of a bloody octagon these kids fight it out in really uncomfortable school gymnasium chairs over who has the most geography knowledge.

He took one look at this game and ripped the controls from my cold dead hands to see all of the places he studies online. 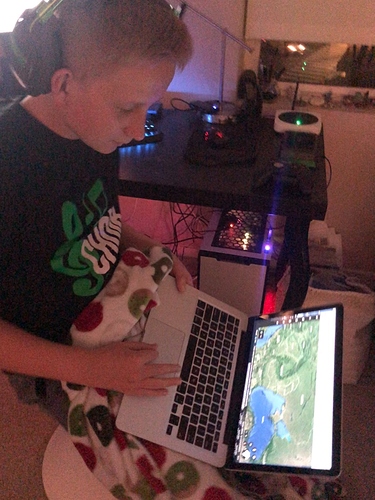 Don’t get me wrong, today he can look at a picture of any point across the globe, but he describes this game as a giant interactive Google Earth 3.0.

Now he says things like “ Dad, you should fly over Sparta to Istanbul over the Aegean Sea, you’ll love it!” 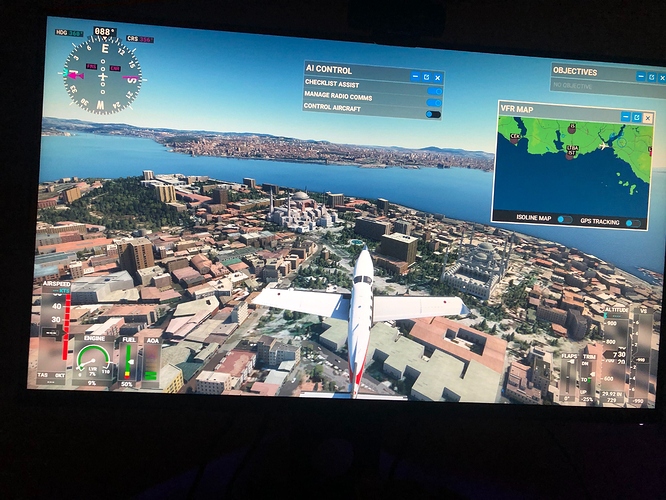 Who is this kid and can I have my computer back? I’ve got geeky landing challenges to complete.

Maybe the pandemic fueled our wanderlust but I think that’s just the tip of the iceberg. Below the surface lies something totally different and we can feel it deep in the recesses of our subconsciousness.

"The Future’s So Bright, I Gotta Wear Shades"

We’re going to look back at this dumpster fire of a year and say life was irrevocably changed forever on many levels in 2020. From a technology perspective this game just force fed us the red pill and showed us what’s possible and practical use of AI on an otherworldly scale.

Seems not far fetched to say that conversations from here on out will be:

Not convinced about the future of AI? I get it… you’re right cars will never drive us around while we text our friends and rockets can’t land themselves with perfect precision after delivering the mail to orbit.

But before you make up your mind, take a look at these articles, and the roots of where this game sprouted from.

Or escape to the distant future where an AI security bot struggles with his day job and tries to understand us crazy humans in this incredible series.

I finally got around to watching the movie “Her” the other night, not sure why I hadn’t seen it, I love movies and tech. But this isn’t just another rom-com to watch on date night, it’s a prescient look at what might lie ahead. Thanks to this game, I can now suspend disbelief about a world where my computer analyzes all of my texts and emails and I become ridiculously addicted to chatting to it about the life’s pernicious problems.

After MSFS 2020, I believe all of those things are possible and much more with AI on this scale. 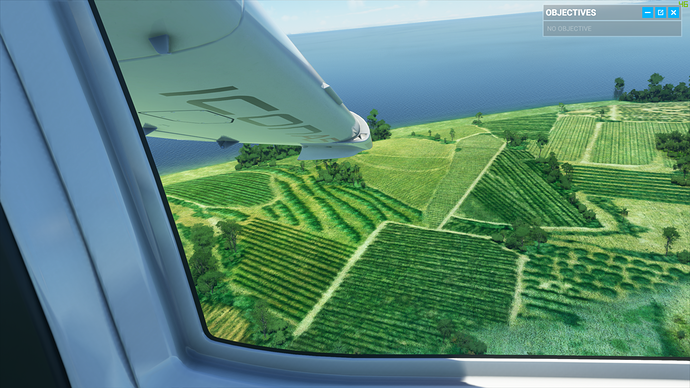 So while we’re all geeking out about our next IFR flight plan or whinging about that the color of that knob in our 4K cockpit, I hope we all don’t forget to hit active pause and peer out the window at the breathtaking tech marvel that’s just beyond that virtual pane of glass.

Yep, well said. All the haters out there should put away your entitled melodrama, your “I won’t tolerate” attitude, and wake up and recognise that this game/sim/whatever is truly next gen. If you don’t get that, you are welcome to go back to your beloved [insert dark ages simulator here] where the buttons do just what you think they should do (no one else, mind) and you don’t have to press a key to continue.

I’ve been with this product since 1985. What a great commentary by someone comparatively new to the genre. Having been through every iteration over the last 35 years, I can say without reservation that this author’s breathless assessment is hardly misplaced. This is a piece of software unlike anything I’ve crossed paths with in decades of gaming. Warts remain, hopefully soon to be burned off in forthcoming patches, but this thing, quite literally, is a “game changer.”

Nice reading and your son is awesome! I’d be very proud too

Pretty pictures of a game not a flight sim make!

try flying somewhere other than the good ol U S of A and you’ll soon discover it’s many shortfalls , don’t believe me fly through london and marvel at the underwater bridges , yes the graphics are a leap but unfortunately not ground breaking

I believe there’s a budding sim under those pretty pictures.

I didn’t want ‘the world’…just a realistic flight simulator.

Instead I got a scenery simulator - with some pretty dodgy scenery at that. London anyone…or perhaps Paris with its missing landmarks.

Of course, if you live in the US, well…

Microsoft did push a graphical marvel out the door to cater to a larger audience and in doing so i think they took some of their emphases off the sim aspect of the game. (Yes it is probably more of a game now than a sim). But look at their track record. Trust me, microsoft will deliver an amazing sim, of this I have no doubt. It would have been nice though if they could have held off longer in releasing it and given us the whole package from the get go.

Of course, the usual overwhelmingly outnumbered salty suspects took the chance provided by this uplifting post to whine some more.

They’re the losers, because hundreds of thousands of people are having tons of fun in this sim right now, knowing that not only it launched in a better place than any other commercial simulator in the genre’s history out of the box, but the platform will be used to reach even greater heights over time.

On the other hand, the salty whiners are on the forums gnawing at their nails.

Of course, if you live in the US, well…

I didn’t know Florence was in the US. The things you learn from crying randos on internet forums… 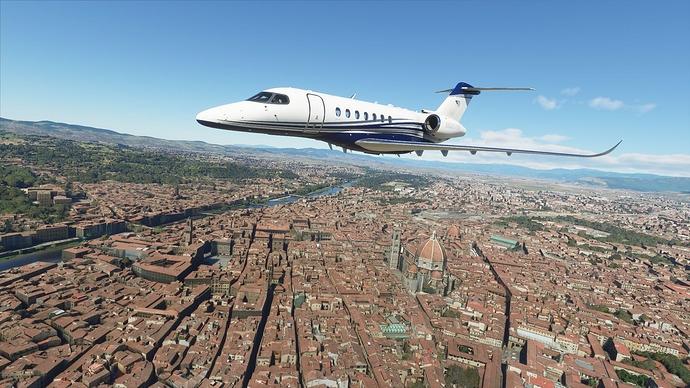 Didn’t say it wasn’t fun, just that it is a scenery simulator rather than a true flight simulator, at the moment anyway.

In any case, everyone’s opinion is valid…even yours.

Chill, it’ll improve in the future, its a global task it ain’t easy

youre sort of right, I mean yes we can’t truly fly ifr or fly the planes as study level at the moment but I have no shadow of a doubt that we will soon experience a true sim

Didn’t say it wasn’t fun, just that it is a scenery simulator rather than a true flight simulator

As a matter of fact, this perfectly qualifies as a “true flight simulator.”

A sim doesn’t need to be the equivalent of 100 million euros professional simulator you’ll find in Lufthansa’s flight school to qualify as a “true flight simulator.”

The simulation is objectively deeper and more full-featured than any other commercial flight simulator at release, so by your arbitrary definition, none qualifies.

Luckily, your arbitrary definition is far removed from the reality of the genre.

I most sincerely hope are right.

Appreciate all the comments.

The school of gaming hard knocks has taught me that when Developers have to launch a console port, the PC version could be on the dark side of the moon for a bit. Although in fairness a developer sites the opposite in this article.

With the rich platform and community this game has achieved so far though, I don’t think it’s a big leap to bet this could be one of the most incredible games of all time.