Hehe. At least I don’t have a wife to answer to

Hehe. At least I don’t have a wife to answer to

Yup. Honestly ridiculous, because the Airport is beautiful and so well done…but can’t use it.

Time to contribute to the thread, and I thought I’d mention some of my favourite freeware airfields that are not for download on Flightsim.to but only from the developers’ own sites, and may therefore not be as well-known. Before I list those, let me rattle off my other five-star locations (most of them payware already mentioned by others):

So here are my three more obscure freeware picks:

A short hop from here to Adelaide, or you can recreate YouTuber Stefan Drury’s mid-2018 stop for a brownie and coffee in the cafe, on his way from Melbourne across the Nullarbor in his Cirrus. Intricate details are included throughout the airfield, which is set in the scenic wine-growing region of McLaren Vale in South Australia. 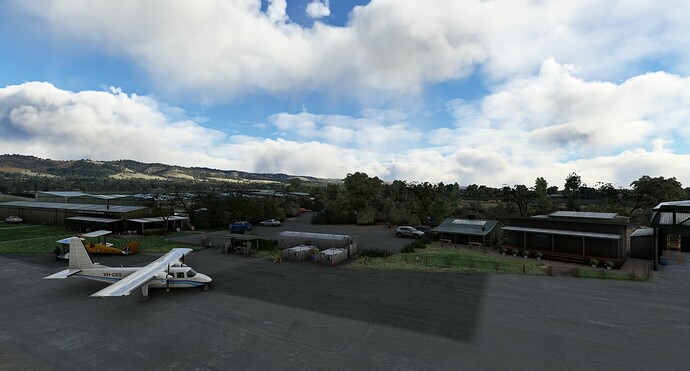 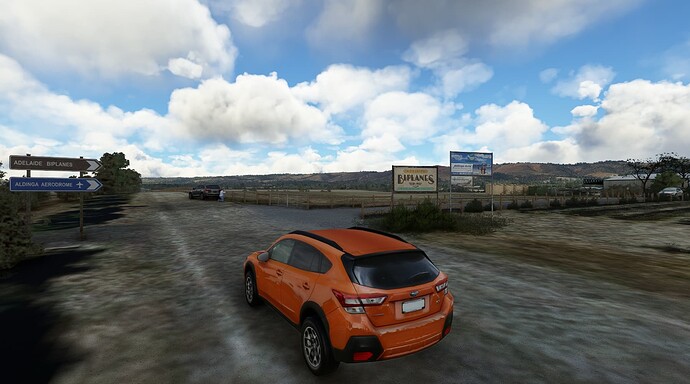 This one is a real gem for me personally as it is the airport of the town where I was born, and I flew from here to the North Sea as a child in a small plane (and barfed most of the way…). It is a bit FPS-hungry but has mind-blowing features for freeware such as a clock that shows the real time on the beautiful 100-years-old building, animated people in the cafe depending on the time of day, and most importantly (another childhood memory): a model of the blimp from that big hangar, which does its rounds in the sky above the wider area. This is a great spot to start a flight over nearby photogrammetry cities down to Cologne, or to the awesome Paderborn airport from Aerosoft that is free in the marketplace. 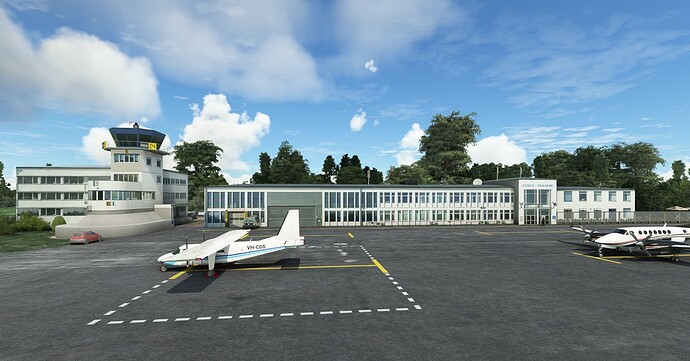 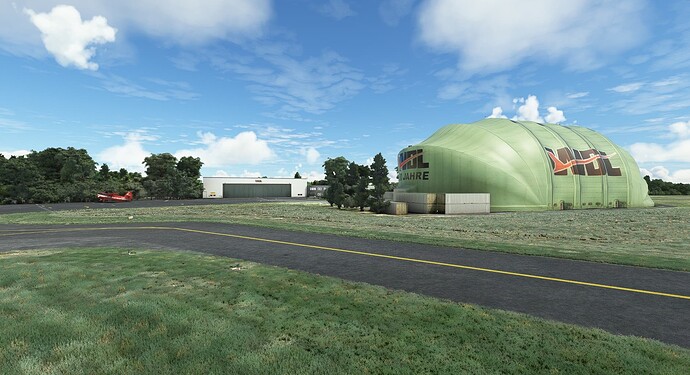 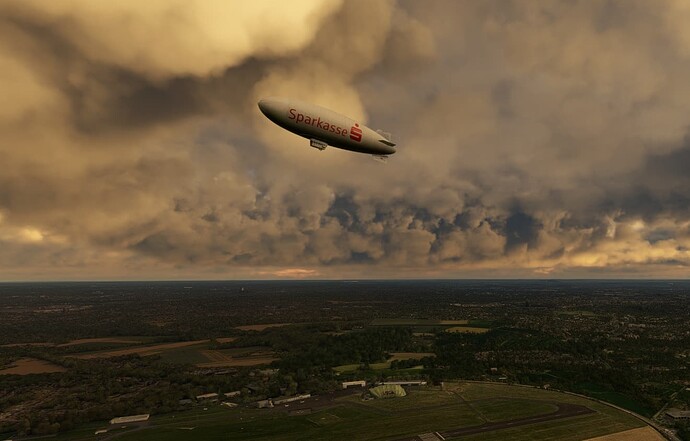 Unlike NZA’s other New Zealand freeware airports, which are all great as well (and also unlike the Kalgoorlie-Boulder one I use for short Airbus trips to Perth all the time), this one is for some reason NOT available on Flightsim.to as far as I can tell. It is a small grass field set in a beautiful holiday resort town, and has a very detailed caravan park next to it. A special feature is the inclusion of seaplane spots (docks) if you want to start on the water in your Goose or float plane. 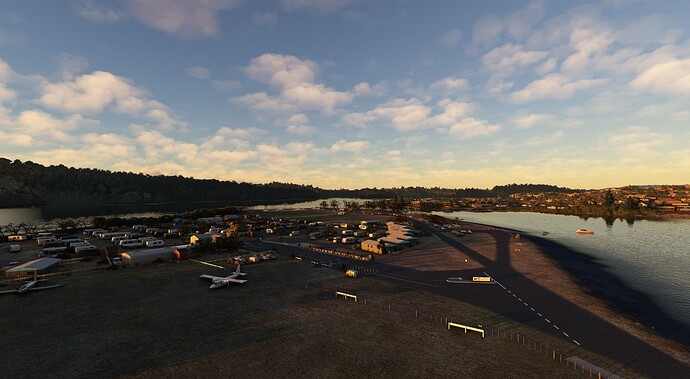 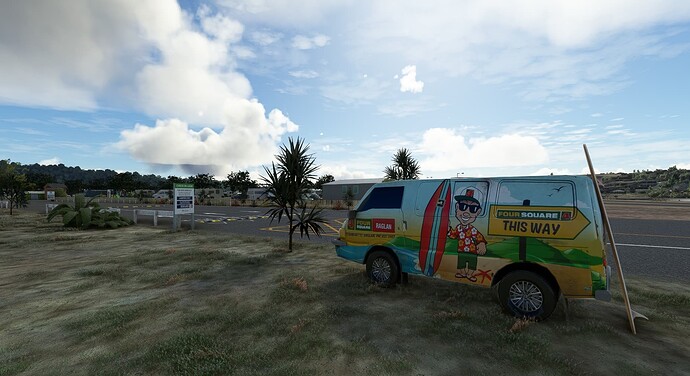 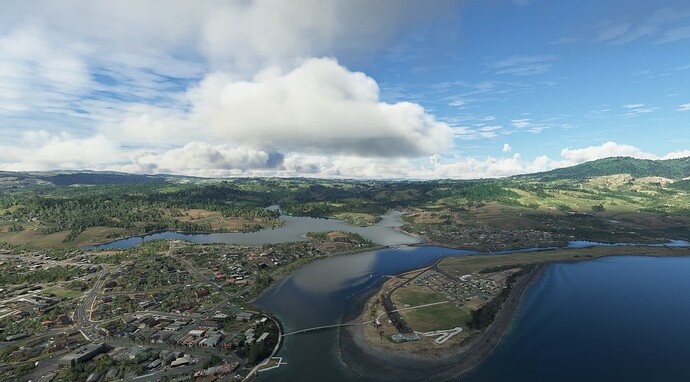 Thanks for those! Document updated. There are some interesting ones there for sure. My SSD is bracing for impact

I just tried this one. It is very nicely done. Link below for ease of finding for other folk.

And WOW that is some POI to see nearby! No spoilers from me but I think they named the town wrongly haha. It’s kind of the opposite of that

Very appropriately named POI though. They got THAT right!! This “world” never ceases to surprise me! 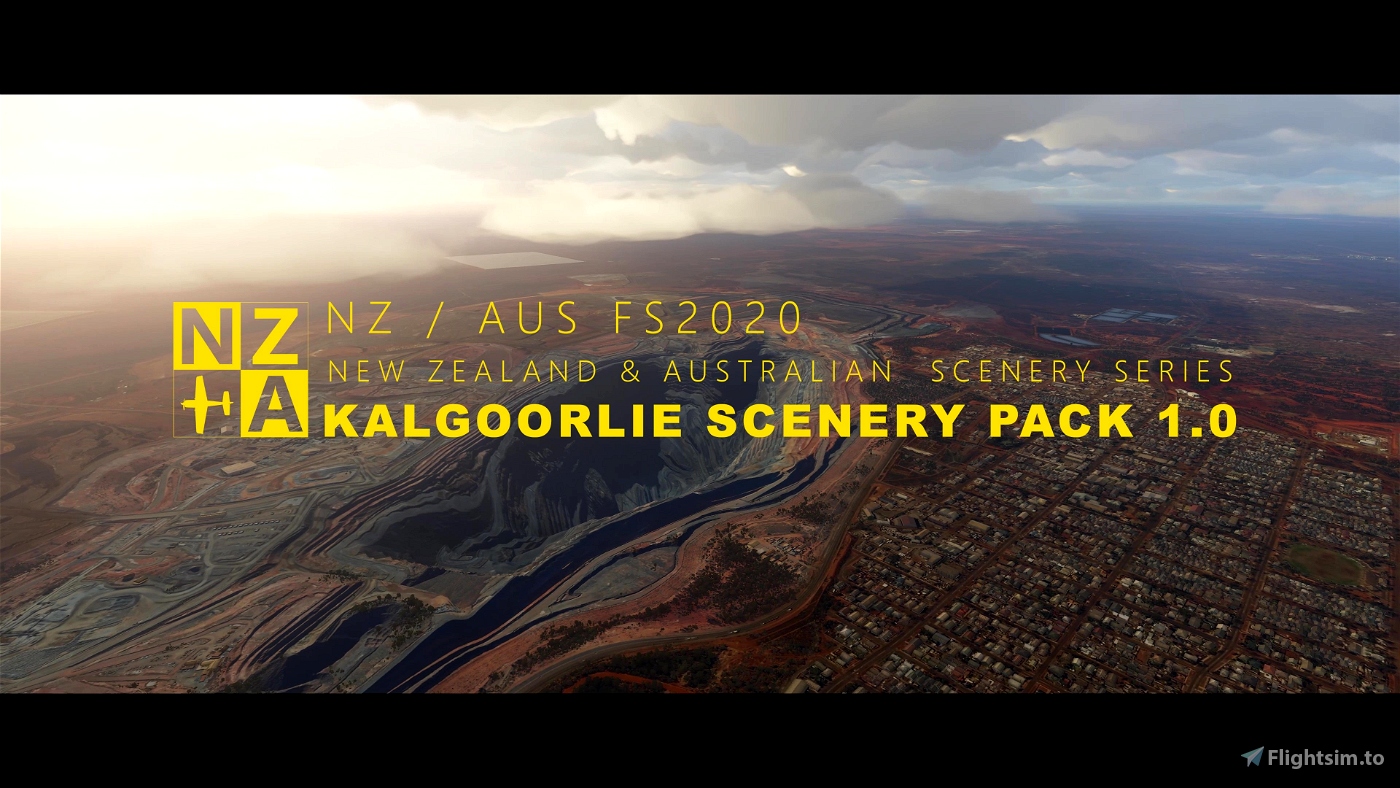 ✓ NZA Simulations - YPKG Kalgoorlie-Boulder is a Microsoft Flight Simulator 2020 mod created by NZASimulations. Download for free to enhance your experience in MSFS 2020.

Looks like you have to make a full account with name and address etc just to get this free one (still needs to go through the same forms as a real shopping cart). Not really up for that, so it’s a shame.

YADG Aldinga while freeware for PC is now also available on xbox as low priced payware, obviously because you can’t really put freeware on xbox marketplace. Low priced but not low quality.

Sorry, didn’t remember about the need for registration - it’s a while since I got it. Totally understand you may not want to. And yes, the standing joke about Kalgoorlie is that it is a hole… Very nice example of DEM done right in the Sim though.

Here are a few more really good ones in the Caribbean.

Canouan really hits my frame rate hard but it’s very well detailed and has a lot of super cute stuff quite wide around the area:

The new IniBuilds KLAX is just awesome. I’ve purchased about 50 airports and this one is just a step above most all of them.

Spend about 20 minutes droning around with FSLTL enabled. Really incredible though hard on CPU/GPU.

Also, good are KLAX and KBOS from FlyTampa. KLGA and KDCA.

Assume you meant KLAS for the FlyTampa?

Can you give me more info on KLGA and KDCA if you want those added please?

Another vote for iniBuilds KLAX. Been waiting for this one and it is definitely worth it as it is superior in every way (including performance) to Asobo’s, and having been there several times irl this year it really is spot on.

I will also put a vote in for PacSim RKSI. This is the most expensive airport (and largest at 11GB) I’ve purchased but the default one (and surrounding scenery) is so bad I would never fly here until now. The thing to me that justifies the higher price is all of the extra modeling in surrounding cities plus very accurate exterior modeling of this huge airport. Caveat: There are no static aircraft so this place is dead without FSLTL, but with that enabled you get to see liveries/planes from all over the world. ✓ RKSI Incheon International Airport BETA(May 25th 2022 Updated) - Link in the description is a Microsoft Flight Simulator 2020 mod created by flywithdeekay. Download for free to enhance your experience in MSFS 2020.

Sorry, it’s this new payware one. That freeware had problems so I never used it.

Assume you meant KLAS for the FlyTampa?

Can you give me more info on KLGA and KDCA if you want those added please?

Yes. IniBuilds is both a producer of IniScenes scenery and a distributor for others. Like Orbx.

I hear the developer referenced as PacSim…they even call themselves that, though the website is “islandsim”. Not sure why…perhaps there’s some history behind it. At any rate, their newly released Seoul Incheon (RKSI) looks fantastic based on what I’ve seen in pictures and video streams, and I’m sure I will be adding it to my collection soon.

Ah yea I missed that, thanks!
Doc has been updated.