I had terrible stutter with about 17 FPS regardless of the graphics setting. Deleting the rolling cache worked perfectly for me and now I see an acceptable frame rate on Ultra.

Whilst this gets me flying with some smoothness, I really don’t appreciate having to downgrade my graphical fidelity to achieve slightly WORSE performance with SU5 when this update was supposed to INCREASE performance!

Thanks but didn’t make any difference. What stuns me is just how much this panning issue saturates the CPU. To put it in perspective, it is the only time in five years with this CPU, that I have ever noticed audio of background music like Spotify, or a YouTube video actually stutter and pause. It has happened with loading screens of games in the past, but never during gameplay. I can literally turn my head in MFS and bring every process to a temporary stop - that’s the kind of godlike power I don’t want to have.

Yeah … This sim is very CPU hungry even after SU5, but I mostly think it’s an optimisation issue, it shouldn’t starve your whole computer like that by simply moving your head around …

Well, so we’re starting to have a problem.

I stopped testing solutions for this problem in the simulator as it was saturating my processor too aggressively and the temperature was reaching 98 °C.

Even after restoring my operating system nothing has changed. Unfortunately it’s a processing optimization issue that’s hitting some people with some common setup.

If you continue, please be aware of the high temperatures

I tried it on my Surface Book 3 and had no stuttering on Medium on the exact same flight plan with FPS between 20 and 30.

Plugged the USB box into the Book and started getting some minor stuttering. So it appears it has something to do with the USB expansion box. No stuttering since I have left it unplugged. The weird part is I have been using it for almost a year with no issues with MSFS.

This is the suttering from panning the camera or just when flying in general? I also have a USB expansion box for all my controls, surely this can’t be related to what I’m seeing each time I look out the cockpit window?

I was holding off buying FS2020 until performance got better and with SU5 I went ahead and got it. Performance is great for my hardware (i7-4790 @3.6Ghz, RTX2060, 16GB RAM) and I can achieve pretty smooth 60 FPS performance at 3440x1440 with some settings tuned down, if it weren’t for that panning stutter.

The issue sure looks like it is related to camera panning, regardless of the source (be it TrackIR, on a controller or mouse). What is interesting is that I only get the stutter when moving the camera, not when turning the plane at the same rate.

For now I’ve had to lock my framerate to 30 which is nowhere near as smooth but at least my framerate is consistantly locked.

Also been having this issue…flying and turning the aircraft is smooth as butter locked at 60fps, but as soon as I move the camera to even look to my left I lose 15-20 fps immediately until I stop moving the camera. What’s going on?

It starts with panning, but eventually becomes a predictable frequency. I suspect if I let it ride, I would get a CTD.

And an update. I ran a cross country flight with AI assist for a six hour flight. After two hours, the stuttering started again, even with nothing connected to the PC. But I did note that if I switch from low graphics and switch back to ultra, the stuttering goes away again for a couple hours. So my suspicion is its a memory leak related to GPU memory. Switching graphics settings seems to clean out the GPU memory and reset it.

This is one of those times I just have wonder what they were thinking releasing this in the state it was in.

I was holding off buying FS2020 until performance got better and with SU5 I went ahead and got it. Performance is great for my hardware (i7-4790 @3.6Ghz, RTX2060, 16GB RAM) and I can achieve pretty smooth 60 FPS performance at 3440x1440 with some settings tuned down, if it weren’t for that panning stutter.

The issue sure looks like it is related to camera panning, regardless of the source (be it TrackIR, on a controller or mouse). What is interesting is that I only get the stutter when moving the camera, not when turning the plane at the same rate.

For now I’ve had to lock my framerate to 30 which is nowhere near as smooth but at least my framerate is consistantly locked.

Sorry this is your first experience with the game. There’s always been issues with updates, but they eventually get ironed out over time. While it’s not really acceptable that this update was released in this state, hopefully the issue will be fixed in a future hotfix.

Also been having this issue…flying and turning the aircraft is smooth as butter locked at 60fps, but as soon as I move the camera to even look to my left I lose 15-20 fps immediately until I stop moving the camera. What’s going on?

So i’m not an expert by any means, but I believe it’s somewhat linked to LOD and the pop in that happens when you look around. I’ve heard from others that the LOD has been temporarily reduced to give developers time to update their airports to a new LOD system, which will then be implemented.

I don’t really know where people are getting this from, so take it with a pinch of salt.

Thanks for posting this btw. This pretty much sums up what I see every time I look in a new direction. I guess what frustrates me by some of the community is that since they aren’t experiencing this, we are over exaggerating how bad SU5 is. I hope some people that aren’t having issues can see this video and realize that it’s not great for everybody.

I would contest that there are likely a great deal more people experiencing this, but they don’t realise. You have to remember that a lot of people lock their framerate to 30fps or find sub 30fps satisfactory. In this instance the frame variation won’t be noticeable, it’s there, but masked by a confined deviation in frames. Stutter is an odd thing, some people notice it quickly, some struggle to, and some don’t connect all the dots and realise they are experiencing an issue.

Here is a case and point, an early review video of SU5 where the reviewer references stutter, quoting; “particularly it seems in making rapid changes of direction” (see 7:00), which we can observe in the video. I am certain the reviewer is experiencing this problem, but simply hasn’t gone on to recognize its impact, its association with SU5, or the parameters in which it is repeatable.

But look, this thread has been getting quite a few votes roll in, it certainly isn’t as uncommon as it might first seem. Hopefully we get an explanation and fix soon. 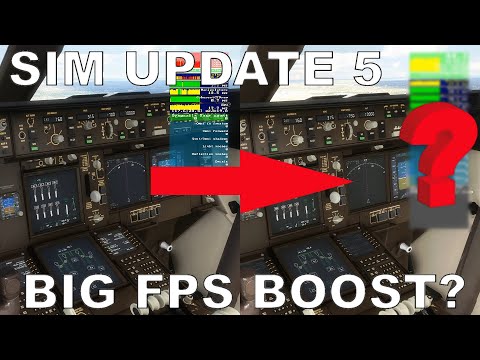 Me too
I5 9600kf @4.9ghz and RTX3080FE. CPU spikes, drops FPS then recovers.
Default high settings used @2k resolution.
Other than that sat at 60fps consistently with vsync on

So, just recorded a quick video showing SU5 stuttering every time I look up from heads down in cockpit. You can see my CPU spike. This NEVER happened before SU5. I guess I mistakenly thought an i7 @ 4GHz would be enough. I’m at my wits end with people on Reddit and other forums saying we’re all over exaggerating and SU5 is great and looks better. Sorry, flying with a stutter every time I look around isn’t a fun experience for me.

Great video LivingFood, it explains why I am getting a lock up of the whole PC and not just the Sim, the CPU is totally saturated. Don’t be disheartened, there are enough people having this issue, providing video evidence, and discussing what is a common experience for us. To everyone, make sure you report this issue with your video to the Dev team so they have as much data as they can.

I remembered I have a flight recorded in SU4, just a short hop around my airport.
Last nigth we had very similar weather, so I figured I’d take another hop at the same time of day, just to see if I misremember how it used to look.
I’m pretty sure which one I prefer.

I know the airport looks different, the addon hasn’t been updated yet for SU5. 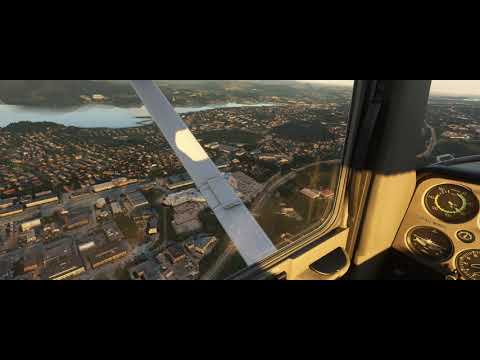 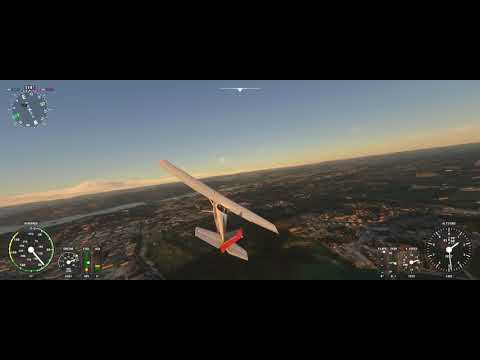 For some reason when I take off in an aircraft from Jersey Airport at runway 26 and I bank to the right after two minutes I have a pause for around 20 to 30 seconds and I have no idea what this is if anybody could give me any advice that would be great I’ve tried doing lots of things like updating the drivers reviewing other alternative changes. Any help would be great.

Exact same issue, stopped playing because of it and won’t start the sim again until it’s fixed. I had the best buttery smooth sim even when panning around like a mad man. Now when i pan around even slowly, FPS are cut IN HALF.