Same here. Sim was fully fine for me in terms of performance in 2k with my trusted 1070.
Now I get only stutters when looking around with Track IR. Big, big letdown.

This is a definite problem, happens to everyone I think. Or at least people who has midrange gfx-cards.

this update is so focussed on xbox that they seem to have forgotten the pc …
but i am sure they will look into this.
it was important to get it quick on the xbox.
so no surprise for me.

This is a definite problem, happens to everyone I think. Or at least people who has midrange gfx-cards.

I’m not sure. I’ve seen a lot of videos from other people where it seems to be smooth. I think it has something to do with LOD, or the rendering. Then again, i’m not tech-savvy so i’m probably wrong.

I come with bad news. I formatted the computer with the suspicion that it might be some configuration I would have done to the operating system.

But unfortunately it had no effect on the problem.

It’s really frustrating you because you’ve run out of possibilities to try anything else to solve the problem.

The stutters even continue doing a full system restore. Which leads me to believe that it can only be an incompatibility with some Hardware.

I believe we will not have the visibility we need to solve the problem, and we will have to find out for ourselves.

So let’s share information to look for similarities in this problem. 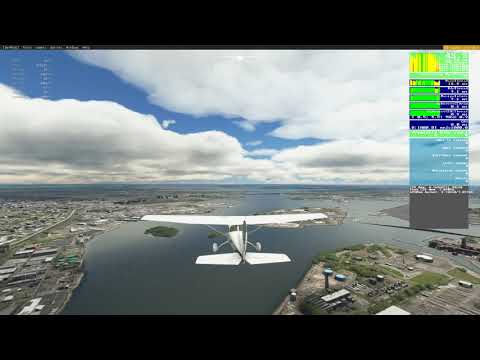 Doing some more tests. I realized that with this process of turning the camera sideways. My CPU usage goes from 36% to 100% and only returns to normal after I stop playing with the camera.

This happens when I use the video settings at maximum or minimum, not making any difference.

Remembering that my processor is an I7 7700k 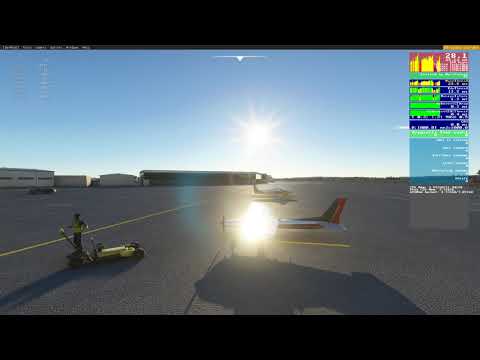 Strangely enough this stutter and FPS drop vanished after hotfix and a windows update today.
Also had ProcessLasso disable the Dynamic thread for the .exe under current and always section.
Michael Moe

I just submitted a ticket on heavy stuttering. I have an i9-10900k with 64Gb RAM, three M2 SSDs, an RTX 2080 Super. Runs around 5GHz consistently even under heavy load.

The flight starts off smooth and can pan all around. After about 5-7 minutes, every time I pan left or right, I get stuttering that is so heavy that its like mini-pauses. Lasts 5-10 seconds and goes away until I pan again. After another 10 minutes, it start stuttering without panning and continues until I end the flight. Every now and then, I can get the flight to last longer without any stuttering, but since the hotfix, I haven’t had one of those.

I have tried shutting off all data to make sure it wasn’t a server issue. No change. I tried lowering all settings to the bare minimum with data off. Slightly less severe, but eventually shows up. So its not graphics settings in msfs or server connection issues.

I have tried everything. My next step is to try a second laptop. I just dread doing it. I had no issues with this until the last update. No hardware changes, no software changes, no changes to my benchmark flight. If I can’t fix this, I am going to ask for a refund. I have tried to enjoy MSFS for all its growing pains, but its become a second job for me. I have spent six hours in the last two days downloading and tweaking to fix this. Any good faith suggestions are welcome to keep me in the game.

Thats what I’m seeing also. When panning and getting the stutter, the GPU goes to 100% for a few seconds. Its exactly the same.

Does anyone else have a stutter when looking up from the cockpit? I have a hotkey on my joystick to look down in the cockpit (to adjust flaps, mixture, cowl flaps, etc) and now every time I look back up, I get a stutter. It’s really frustrating.

I dont use TIR or VR. Panning was always a little bit of an issue but before it was consistently stuttery because the framerate was not very good. Post update the framerate is much better but panning around the cockpit with the mouse is noticeably worse.
Although one my earlier flight it clearly looked worse on the ground and was not noticeable in cruise. Most probably as people have said, some type of culling issue.

Same here,I think everyone is having this issue.
Upvote this!

Pretty sure everyone is experiencing this.

Well, i’ve had a problem with the exact those drawing stutters prior to this SU5, just after i updated my Nvidia drivers to the 471.41, but i was experimenting with the quest 2 at the time, not the trackir, but the drawing appeared to be late when moving my head… so i reverted back to the 471.11 that i had still sitting on my Harddrive and that stopped that issue from happening.
Hope it helps someone else as well.

I’m still having this issue when panning cockpit, and I’m still on 471.11, so don’t think it’s driver related.

On my setup there is a long pause showing huge main thread activity and frame drop for a second when looking down on console floor and back up. There is also more micro-stutters when camera is not moving than before.

It’s so annoying I cannot use the sim ATM. I hope Asobo can fix this quick. On my setup I9-9900, 32GB ram and RTX3080 things became even worse after the latest hotfix.

Yes, I was going to post that as I found if I moved my head slowly, almost all pop ups were not seen. Not perfect but better

i have the same problems. Pop-in, fps stutters with view changes… With the previous version it did not happen to me.

Didn’t work for me unfortunately, but hopefully it will work for others.