Do you have any add-ons in your Community folder? If yes, please remove and retest before posting.
No, all have been removed.

Are you using Developer Mode or made changes in it?
No. Only to provide diagnostic overlay in the provided video (link below)

Brief description of the issue:
When using TrackIR, mouse, joystick hats, panning or tilting of the camera results in significant framerate drops and stutter in SU5, including audio stutter. The impact of the problem appears dependent on the speed in which the user moves their head. It is essentially unavoidable with normal head movement. It is as if there is culling of the environment beyond the view port that is not “buffered” fast enough to support head tracking (forgive my terminology). I have tried increasing the smoothing of TrackIR, but it has to be increased to such a degree that it becomes frustrating to comfortably use, and still doesn’t resolve the issue. 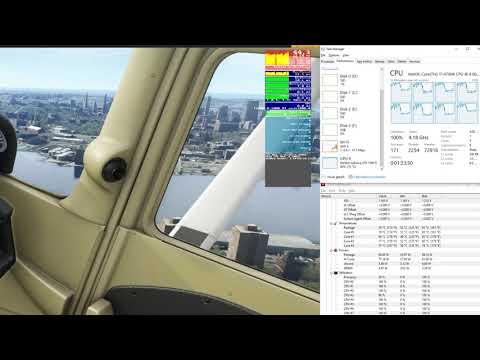 Update 4 August 2021: I have recorded a more detailed video using Task Manager and HW Monitor (see above) to look at usage and temperatures. The results are quite interesting. I have added this video to my original post also.

You can see the game runs smoothly and with a decent frame rate whilst the camera is static. CPU usage spikes immediately to 100% on all cores when panning around, and temperatures increase 10-15 degrees. GPU usage actually drops slightly during panning, and generally remains well utilized throughout. RAM is incredibly underutilized at 4GB, and VRAM is equally low at 5 of 11GB available.

In the second half of the video I use the aircraft to pan by banking sharply, to demonstrate the problem is not with TrackIR, but with the in game viewable or rendered area. Whilst the video is not as smooth as what I was witnessing, it was generally unplayable when looking around.

Detail steps to reproduce the issue encountered:
Head tracking with TrackIR, also noticeable with mouse panning. The issue should be easily repeatable.

The impact of the problem appears dependent on the speed in which the user moves their head. It is essentially unavoidable with normal head movement. It is as if there is culling of the environment beyond the view port that is not “buffered” fast enough to support head tracking (forgive my terminology).

Same issue and I came to this conclusion too.

Out of interest. Do you have rolling cache enabled or disabled?

And have you experienced any TrackIR disconnects since SU5?

I’ve had more disconnects today than I’ve had in months, I’m not seeing any bad stutters with TIR but panning with the mouse isn’t great. One other thing that is new is long freezes of the sim for 10 seconds or more. It’s even done it in the menus once or twice.

I was either getting CTD or TrackIR stopped working. Could not complete a single flight all night

I’m having this issue with using Track IR or even using views on a hat switch. My spidy sense tells me its related to the newly implemented culling that is causing the LOD/pop-in issues as well.

To everyone having it open a Zendesk ticket, vote the threads, and get on Twitter.

I had TrackIR issues since the previous big update, mostly where it just didnt work when i started up a flight, restarting the game fixed that. Have not started with the new update so gonna check now how its working.

I dont know when it was updated, but inside the TrackIR program i did Check For Game Updates and it found one, check if this can fix your issues.

Did a flight with TrackIR, and sometimes, when you look to your left or right i indeed get some stutters, when i disable TrackIR and use my joystick to look left or right, its smooth as butter.

Yes it isn’t TrackIR that is inherently the problem, the problem is how the game is now preparing assets to be rendered in SU5. The rendering engine is lagging behind camera movement, it will happen if you use a mouse to look around also. Hopefully this is just a simple fix of increasing the preload or ‘cache’ of environment either side of the viewable to that account for movement. Very strange, I’ve never seen this issue in racing or aviation sims before.

Try deleting rolling cache after the update and then recreate it. Helped me.

I tried that, as well as reassigning cache to another SSD, it didn’t fix the issue.

I want to reiterate that this problem is not actually unique to TrackIR. It happens with TrackIR disconnected. It occurs with mouse look, and joystick hat switches. But it even happens if the camera is completely fixed and the aircraft itself is turned, using the aircraft to pan the view so to speak. The more time I spend looking at the issue, the more it appears to be a problem with the rendering process in game, not a peripheral conflict or monitor conflict.

I’m having the same problem, but I’m not using any trackIR. The simple fact of turning the camera left or right makes me lose from 70fps to 25fps.

I noticed that this is generated by the local terrain loading, that is, every time I change the view to another direction it reloads the terrain map and I have a significant frame loss.

I noticed that this stutter decreases when MSFS is in the background.

In cities like New York, the loss of FPS is significant depending on how much the map loads.

It seems that only we are having this problem and my experience is totally frustrated. I can’t make any more flights because of stuttering.

I’ve reinstalled the simulator, the only thing missing is reinstalling the operating system. But I’m not sure it’s going to solve my problem.

There’s not many of us with this particular issue, which makes me worry that it won’t get fixed. I don’t know, maybe the hotfix will surprise us, but I doubt it.

What makes you think there are not many of us? I have now seen four threads appear on the forums regarding the matter since SU5 dropped.

4 threads with a lot of the same people every time and usually not many replies. I’m not saying it’s that small of a number, just that other issues have seemed to take precedence, such as the freezing issues and CTD’s which have been a bigger issue for most people. Simply put, Asobo are going to prioritize the issues which affect the most, hence why I don’t have much confidence that it will be fixed soon.

Also, some point after Sim Update 4, me and a small number of other people began experiencing an issue where the framerate would gradually drop during flight, and as far as i’m aware, that wasn’t fixed until Sim Update 5. I put up with it for weeks and then eventually gave up.

I hope I don’t sound like i’m whining. I’m just getting a bit sick of these bugs that have made the game unplayable for so long.

In seems they focused in CPUs with 8 cores like the Xbox, and now in CPUs with less cores doesn’t work well …