The current inflight menu is great for users who do not want to use a mouse, but it is not so good for those of us who use mice as part of our simulations. It is oversized and seems to have a bit of a performance impact.

My suggestion is that you add a more traditional style menu bar & context menu layout. The top menu could be enabled/disabled in the game settings. The top bar would be displayed/hidden by pressing something like Alt.

Each dropdown menu could have extra options, for example under aircraft we could have:

Additionally, it would be nice to have a right-click context menu. The context menu could provide shortcuts to various camera views. 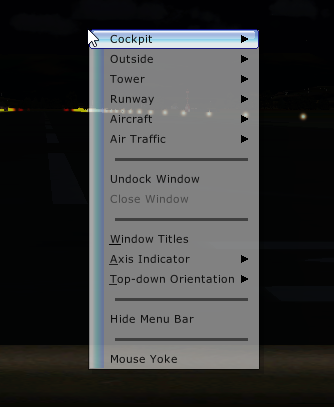 At it’s simplest implementation, these menus would be shortcuts to existing windows (this assumes we don’t add extra windows like changing an aircraft), so it shouldn’t be too much work to implement.

Couldn’t agree more with the above and I think many traditional flight sim users would agree. This also provides the ability to change aircraft without having to end the flight along with many other features.

Agreed-adding this would be so handy!

Nooo, why go back to an interface of at least 14 years old??? Try to learn and embrace the new style. Know it can be hard, but you get used to it

Agreed, this is a good suggestion.

I also think that the P key be used for PAUSE
and after Pausing that those Giant Thumbnail options sit there blocking the screen.
If I want to pause I might want to see the visuals behind these Oversized Dino Buttons.

Another thing on the start page a Tick Box to turn off that cheesy hypnotic music. It beyond me how any one can think let alone fly an airplane after hearing it. lol (yes honestly).

I also think that the P key be used for PAUSE
and after Pausing that those Giant Thumbnail options sit there blocking the screen.
If I want to pause I might want to see the visuals behind these Oversized Dino Buttons.

Open your controller configuration window and search for ‘Set Pause’ and ‘Remove Pause’. You will need both, but this will give you a more traditional pause. I am currently using P and Ctr+P.

My hope is we get a toggle pause button in the future, I’ll be making another Wishlist request detailing that after I have dinner

Thanks for that Nyx1819 and great idea for the Toggle Pause.

I too should be thinking about a wish list but I keep promising myself to write stuff down but end up forgetting to only remember later. lol

Though I do wish there was a way to also Save or Export or Import Profiles be it Keyboard Mappings or Joystick Profiles so users can quickly import their past mapped profiles.

Im tired of having to remember FSX or XP11 keyboard profiles to only have to try to modify them. Is there a Universal Keyboard mapping for Flightsim in general would you know? Either that or import and export those mappings would be nice to have too (imo).

I agree with you, but I remind you that it was entirely thought in order to pass it on xbox, with minimal transfer moves, I don’t think they change, because it’s the whole interface that should be reviewed, I don’t think it’s normal just for this walk in the home page menus, that the Gpu is at 100%, but it’s like that 100% 3D interface

Someone in discord mentioned if you disable the map from the toolbar you’ll see an increase in fps performance. I tried it and it did seem to work.

I know that’s a little off topic but your post reminded me to share that with people since you were talking about the toolbar.

use the pause key on keyboard for live pause.

Now we are really getting off-topic (Bad mod Bad… slaps own hand). That pause freezes your plane but not your control inputs, so you can cause your plane to crash the moment you turn it off. Take a look at this for anyone who wants to know the difference between the three pauses.[HOW-TO] How to actually PAUSE the sim!

I’d be fine with the new menu system if it included some of the items missing from the old menu. Like others have said, being able to access aircraft and world options without having to end the flight should really be there already.

I don’t agree, I like the new modern menu.

I do think we need an option to change planes in flight without having to end flight.

Agree. The current menu is too big and god fox Xbox, but not for advanced/hardcore simmers playing on a PC. Ate least give us an option to scale down the interface, everything is so big now.

We also need the ability to flight plan without going back to the main menu. I would like to do multiple flights without exiting the sim.

Nooo, why go back to an interface of at least 14 years old??? Try to learn and embrace the new style. Know it can be hard, but you get used to it

Agreed the old menu well looks old and clunky, sometimes it’s time to shake off the dust and learn to use new things. I get you want some of the old options there, fine, hope they add them later for some of you, but I personally like the new system.

Perhaps they should have the option of “classic” look and “modern”? For the die-hards out there.

Ate least give us an option to scale down the interface, everything is so big now.

There is an option to scale down the interface… does it not work with the in-flight menu?

I don’t think so. I have scaled my interface to 85٪ and it looks amazing, thanks Asobo:). But I’m fairly sure the inflight menu hasn’t changed.

Please: where is the “Menu” that there was in the top bar of FSX when playing in “Janela Screen mode”? Bring it back, please !! It was so easy to use.