How’s the sound pack ? Heard it’s bad . Not close to being authentic . Has that been fixed ?

The Twin Otter is such an iconic aircraft, however I like this add-on much less than similar-purpose aircraft such as the Milviz/Blackbird PC-6, the SWS Kodiak or the Black Square Caravan.
Among issues are the amount of systems not modelled, the disappointing cockpit 3d/texture modelling, the sound issue as well as the developer’s decision to not allow aircraft mods.

Well I use a sound pack from FTSim which I think is good. As you know, AS is currently testing a new sound pack which hopefully will be even better. And hopefully Asobo will make some improvements to turboprops in general. But in the meantime I am enjoying it.

Thank you for the info . I’ll prob be holding off on this . Maybe get the Crj instead

Any word if aerosoft fixed bugs, flight model hacks, low quality modeling and texturing issues in addition to fixing the sound? There was so much more wrong with this plane than just needing a new sound package but from what I’ve seen nothing has been said on the other issues. I wanted this plane but held off and now am not sure it’ll even end up in my hangar.

That’s another problem. They don’t communicate a lot.

Flew this at my friend, he has the sound pack and while i don’t like Aerosoft their attitude the plane flew quite nice and tbh i quite liked it.
Flew nice and believable for the size.

For those who struggle with xwinds, do you remember to use aileron and not just rudder? Because i had zero issues with that. But you have to use aileron and land with the wing into the wind down or even irl you may risk a blow over.

One thing that was noticable was the beta/spoiler on approach.
He warned me though, when the pitch sound changed add power or it goes into beta. And tbh that flies a bit weird but as long as you react to the sound it’s okey.

Also the touchdown as no feedback. Specially on a soft landing you won’t feel you have landed.

But aside from this i think it quite a solid and fun plane.

What exactly is disappointing about the cockpit modelling and texturing? I personally don’t see any issues and I’d say the cockpit looks good.

I agree completely. Apart from the sound mixing it’s a really pleasant plane to fly. Really stable in the air like it should be.

Please be aware that the DHC-6 and the CRJ are very different aircraft that fill very different roles. One is a jack-of-all-trades STOL utility aircraft, and the other is a regional airliner.

I can’t recommend the DHC-6 highly enough, especially considering that there will be an update soon.

Other than the sound update, I’m not sure what will be in the upcoming update. But I would say it’s safe to assume that there will be bug fixes.

I would get the 736 or 146 instead of the CRJ. The CRJ seem to really still need some AP logic updates. But best ask in the CRJ thread i gues.

The CRJ is one of my favourites aircraft in the sim. Mainly because I like the size and the routes you can fly with it. These are more mid-haul and therefore a great mix between starting, landing and some relaxing inflight. I don’t have any issues with the AP of the CRJ and also think it is very well modelled. It’s much more detailed than the DHC-6 but mainly because it is a more complex aircraft.

I also like the DHC-6. The sound issues I have fixed with an soundpack. And the rest is working pretty well. It flighs pretty stable and is easier to handle then the Kodiak. But I don’t really compare these two as the DHC-6 is for more passengers and flies other routes than the Kodiak. I fly both and enjoy flying both.

I’m honestly not that interested in the tiny 737 or the BAe 146. Just personal preference. And in terms of regional airliners, I am a fan of turboprops such as the DHC-8, ATR family, or the DHC-6. They just look and sound cool to me.

I’m going to buy the CRJ because I’ve always thought they are cool, and they are quite popular where I live as regional airliners. Although sadly they (and other regional airliners) seem to be getting replaced almost exclusively by Embraer jets. But the CRJ is not at the top of my list for aircraft I am going to buy. I’m more interested in buying the DHC-8 from Majestic and the ATR turboprops from Asobo and Blackbird.

I wouldn’t say the DHC-6 Twin Otter is primarily a passenger airplane. It honestly does anything you want it to do, and it will do it well. De Havilland Canada even sells a VIP configuration. I would never associate a rugged STOL airplane with VIP transport, but it can do it.

I do have a question about the Kodiak though. What makes it different from a Cessna 208? I know that question probably sounds incredibly stupid, but I honestly don’t know too much about the Kodiak other than that it looks somewhat similar to a Cessna 208. I’ve heard good things about it though, so I’ve been keeping my eye on it in case it goes on sale.

The only issue I have with the cockpit modelling is that there is light leakage in the upper left dash which can get distracting. 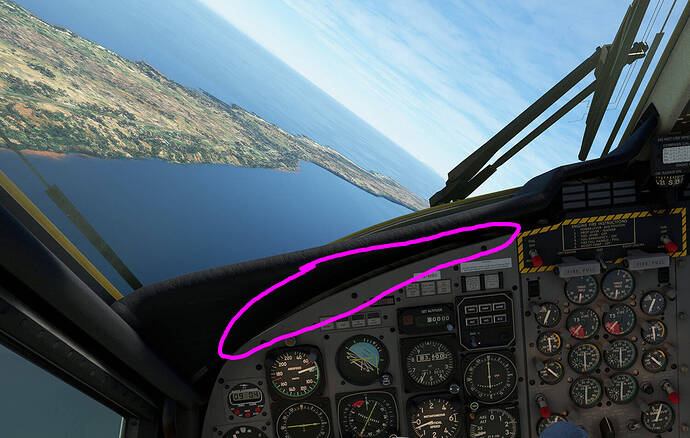 Apart from that, and with a sound pack I enjoy this bird a lot. Feels believably at home almost anywhere on the globe.

It’s nice to fly but has some Bugs.
Invisible Spoiler. Do a ILS Approach with 80 to 90 knots and you suddenly have to add Power or you fall out off the Sky.
Fuel System. That’s a mess. Nice Switches for the Fuel Pumps, nice Sound but complete useless. Pumps are not needed in this Aerosoft Version of the Bird, the Engines will run without them. Don’t try this in real Life.
Wing Tanks. Fuel System for the Wing Tanks is complete wrong. The Engines don’t run dry in real Life when the Wing Tanks are empty. AFT and FWD will take over without interruption.
In the Aerosoft Twotter you will practice Emergency Procedures, restarting Engines in Mid Flight without any warnings.

I feel like most planes in MSFS lack in systems depth. Sometimes I forget certain tasks in the startup checklist and the plane starts anyway. So much for being a simulator.

It actually doesn’t bother me though. I do like when a plane is study level and you get punished for mistakes but most of my flights are relaxing cross country trips where I admire the scenery and try to navigate my way.

Huh, I never noticed that.

The cockpit doesn’t look as good as many other third-party offers. Among issues are the bezels that aren’t even round, bugged shadows and reflections, and basic textures. It makes the cockpit look toyish. Among free aircraft you can check the Beaver to see a proper texture work.