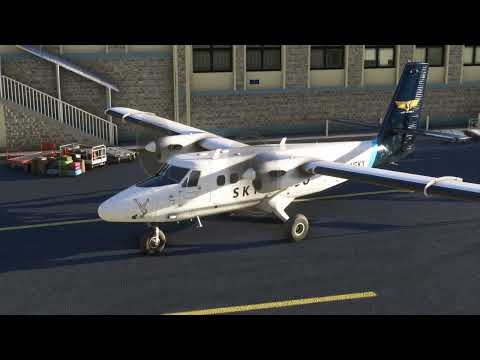 I like the Twin Otter. Used to work at the factory where they were built. I read all the negative comments but I still got it. I like it, it flys alright, the sounds are kinda sucky. Hopefully, this update will help. Been flying around the Scottish isles as well.

The Twin Otter is a great aircraft, plenty of real world history. I think Aerosoft missed an opportunity on making a real good addon. They may still fix it, if not I’m sure someone else will.

Guess, now I’ll have to punish my credit card some more

Finally! Now I will fly it.

Is there an updated manual, by chance?

Sound are quite different, a real improvement to my ears. Glad they got updated.

There wasn’t anything there when I checked, neither on their site, forums, or in Aerosoft One.

It now sounds like a twin otter. At long last!!! Thats exactly how they sound when passing our house

I doubt it. The manual is actually a book on the Twin Otter and it is excellent. It alone is worth the price of the plane.

Besides the sound was anything else fixed?

Yes indeed, with my older Altec Lansing surround system and sub, the new sounds are just so immersive. Comparing with video, it’s spot on. Really enjoy the Twin Otter, and new even more (no longer will use the FTSim+ sounds on this bird).

Only saw new sounds in the release notes.

I was hoping for some FM tweaks and after a first flight it seemed better, but I tried again and it is the same. Very unstable under minimal wind, feels too light and fishtails a lot. Excessive banking on takeoff, even with almost zero crosswind.

New sound is actually really good. Hope they give some attention to the other issues too.

Thank you for going through the trouble, very useful video!

Startup unfortunately doesn’t sound much improved. There is still a significant lack of transition between the engine spooling up and the prop taking over.

Throttle input transitions do however sound much better all throughout.

They fixed the sounds. It took forever, but give them credit, they came through and made good on their word. And the sounds are fine. They’re good.

Howeverrrr. (You knew one was coming, didn’t you) - after a year (when was this thing released?) are you seriously telling me they could not be bothered to change/fix/patch another single thing about this aircraft? Nothing at all? So literally all they released was the new soundset?

The sim has undergone multiple updates, flightmodelling changes, weather changes, CFD stuff… All of that was added to the sim, but Aerosoft are seriously saying “Nah. Plane’s good.” No bugfixes? (there are bugs, would you believe it). Flight model improvements? Quality of life improvements? Nada?

Here’s your sounds, now sod off. That’s the feeling I get a little bit. Shame.

I agree 100%. Very frustrating. So many single devs and other much smaller companies doing amazing things on this Sim and they can’t even keep their plane up to date on the new physics and other SDK improvements.

“We are planning to do so with SU12.”: Flight Model? - Manual Flight. Auto Flight - AEROSOFT COMMUNITY SERVICES

So far the sound is quite an improvement on the previous sound package… but…
still a couple of remarks:
positive:

Despite the negative points (maybe Iam the only one suffering from it, but please let me know)
its an overall great improvement of the sounds. Unfortunately it took way to long in my opinion, but it was well worth it waiting for.