standby memory is nothing else as cache, in DOS ages called smartdrv, and its nothing wrong if these is full… ( simple test: open/view a 20gig video file and you will see it goes directly into the standby memory ). And because this exist, a reopen of a file which was already openen is much faster.

These standby memory have a low prio and have nothing todo with a memory leak.

That you can clean the Standby memory we mentioned often , example CTD (Resource Exhaustion Monitor) - #12 by MichaMMA.

But that windows use pagefile , because of Standby memory isnt correct.

This is precisely what Windows is supposed to do (and has been doing since Win95)… memory management. Windows does clean up real and virtual memory as part of the overall memory management and on its own schedule. However, Windows memory cleanup is VERY VERY SLOW for MSFS. Depending on the system specs and the programs running, memory cleanup can take HOURS which is why apps that instantly cleanup memory are so important. A system reboot (not ‘sleep’ or ‘hibernate’) also cleans up memory but is not practical while running MSFS.

The only way I’ve been able to solve this issue is to reduce both LOD settings down to 100. But I’d hardly call it a fix as most people have it set to 100 anyway and still have the issue. This is getting so frustrating I don’t know how Asobo can’t recreate it on their end.

After applying the registry edit mentioned in another thread linked above I no longer have any performance degradation in default aircraft and 3rd party besides FBW.

If this tweak resolved your performance degradation, did you test with FBW or is the issue still present? Thank you

A320 Development version, No other addons, RW 33 EGBB, 12 Noon, Clear Skies.
Loaded in. Then did one 360 degree pan in the external view, before going into flight deck.
Started timer. Took screenshots at 0min, 30 and 60mins. 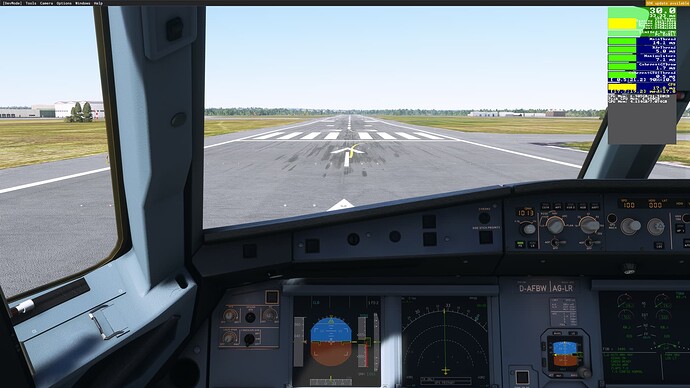 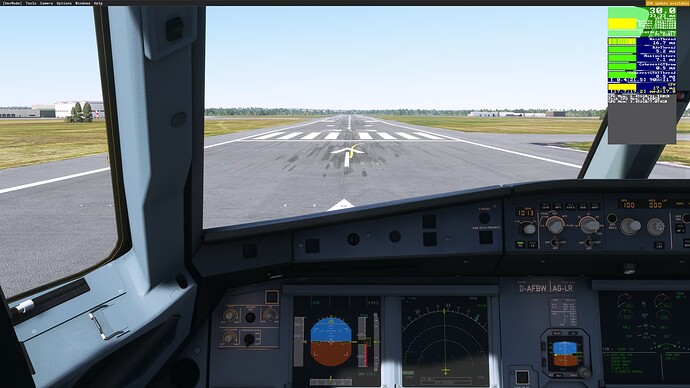 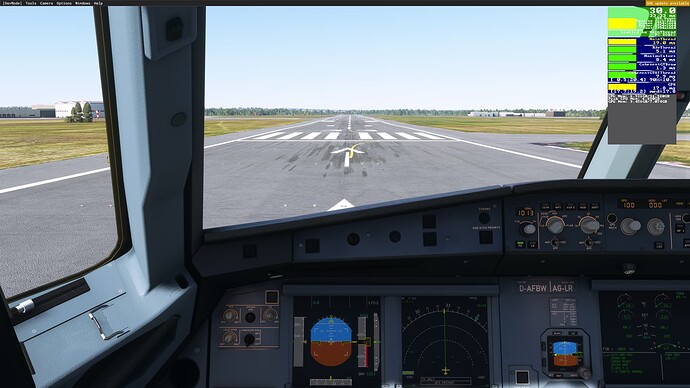 I only have FPS degradation (mainthread latency increasing) with FBW dev and exp. This is before and after making the NDU registry edit /

And it sure did! This is a eureka! exactly as expected!! Just did a flight with all the bells and whistles without a Hick-up

What was the registry edit that you did to “fix it” ?

The solution (solved) is located on the very first post

how can I do the CPU check to see if one of my cores if getting eaten up?

Task Manager. I forget which tab but it should be self-evident when you find it.

Looks like CPU 7 which is really 8 is completely maxed out? 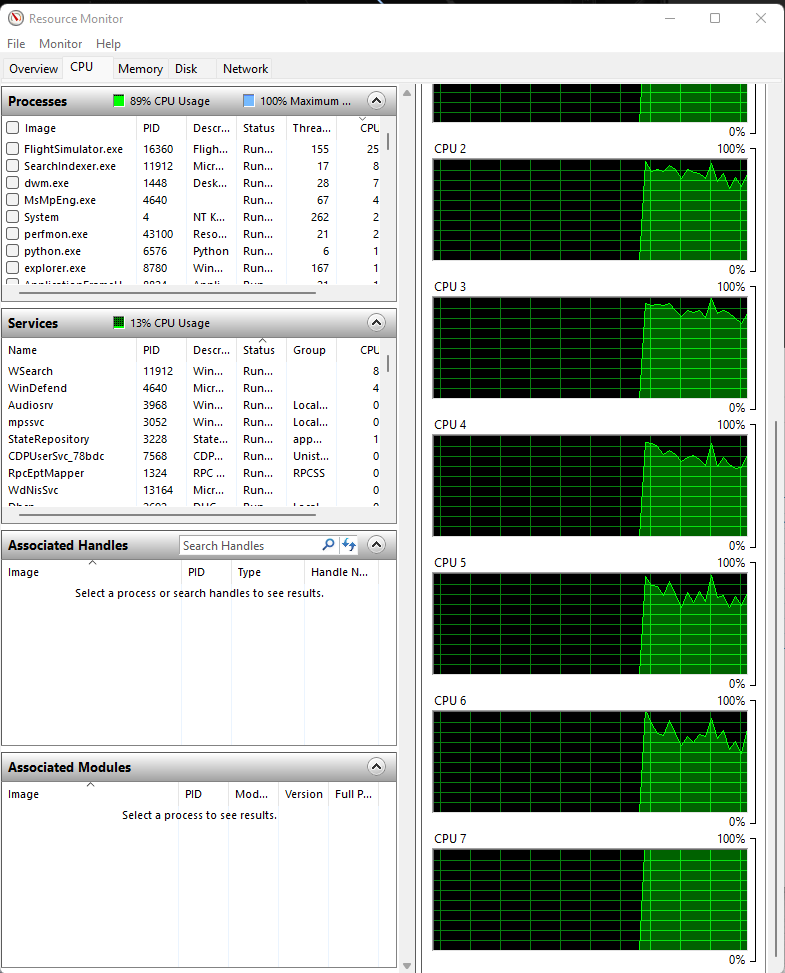 Ah… that is probably the famous CPU LOD bottleneck. In short, your Terrain and Object Level of Detail settings as well as traffic settings (especially airplanes) might be just a bit too high.

LOD seems to be sent to the last CPU core, and if set too high, it tends to max out the CPU, especially at big airports. And if one core gets maxed out, the whole computer is throttled to keep all cores in sync with the slowest core.

You may want to check Dev Mode in sim, and follow the steps listed in this linked post and subsequent posts in the same thread.

This thread talks about maintaining a locked 30 FPS but if you have the system for it, you can maintain a locked 60 if you go for 15 ms instead of around 30 ms.

Ok, so your LOD is probably too high. You can use the fps dev tool to ensure your mainthread latency stays in the yellow. For a reference, I have a 10700k @ 5.1 all-core, and 200 LOD is as high as that CPU can go before I get so mainthread limited that I get stutters. Start with reducing your LOD, on the ground at the busiest airport you fly at, until the little yellow bar on your mainthread stays yellow. If you’re getting more than a tick of red every couple of seconds, your LOD is too high. …

fully agree with your post…just acknowledging there is an issue would be nice.

But if you don’t even acknowledge that there could be an an issue, then you do not have to address it … (or even deny there is an issue)

Going forward, this may well get know to be “The Aerosoft Effect”, as they seem to have perfected this form of customer support.

Performed the NDU registry change and still had FPS drop.

Next, I just removed the Toolbar Pushback after using it for the past several months. Performed a flight DTW-CMH. No FPS drop, using the FBW (latest exp) sitting at the gate after landing in CMH for 1hr. GPU still at 100%, same frames as when departing DTW.

Seems like the Toolbar Pushback jacks up the performance. THRILLED I can finally perform multiple leg flights

If that’s true then Windows’ memory manager is broken. As was mentioned, standby memory is basically a cache which should be released should other applications require more physical memory.

The basic design of Windows memory management has been the same for more than 20 years. It isn’t broken. Windows is designed to process many different types of programs from email to word processing to web browsing to games to watching video to video editing. Windows is designed to run these programs on many different hardware platforms. According to the MSFS FAQ, the minimum memory spec is 8 GB. I wouldn’t recommend this amount of memory to anyone. However, the design of Windows memory management allows MSFS to run with only 8 GB.

Windows is NOT designed to run only MSFS or even to run MSFS optimally. One “workaround” is to buy or build a PC specifically for MSFS…

Windows memory management allows users to run MSFS, Navigraph, LittleNavMap, and a web browser to watch YouTube all at the same time.

When Windows starts moving memory around MSFS performance starts dropping. Personally, I watch my memory utilization and as soon as it gets to about 50%, I start looking for any unnecessary programs to stop.