I noticed that your GPU load is dropped to 54% from 65% at the same spot. I’m expressing this again, the FPS starts going down when the GPU load is dropping. On my system, as far as the GPU load is >97% “I haven’t limited the FPS” I’m not seeing any problem. After 3-4 H the GPU load starts dropping that is the beginning of the story. If you’ve decided to try the same route with DC-6, prepare yourself for 11:30 flight

I’m going to limit my FPS to 37 and do the same flight to compare my experience with yours.

I can’t believe that the GPU load is about 2%!!! How the Sim can run with this GPU load? Mine drops up to 40% after 6H, I don’t know what happens if I keep flying! Any chance to fly the same route and let us know your experience with 747?

Did a CYVR to VHHH. Usually never make it due to either CTD or FPS is so low (1-2 fps) that the simulation pretty much doesn’t progress. Usually starting to have FPS deteriorate flying over Japan.

This time though I made it all the way through with one super strange observation. During decent over south china sea, FPS starts dropping down from the 50s to 7-10 fps. Barely playable at this point but I still tried to go through and land it. The MOMENT the wheels touched the runway at VHHH, fps pops straight back to the 40s. I can taxi to the gates no problem after that. Uber odd. 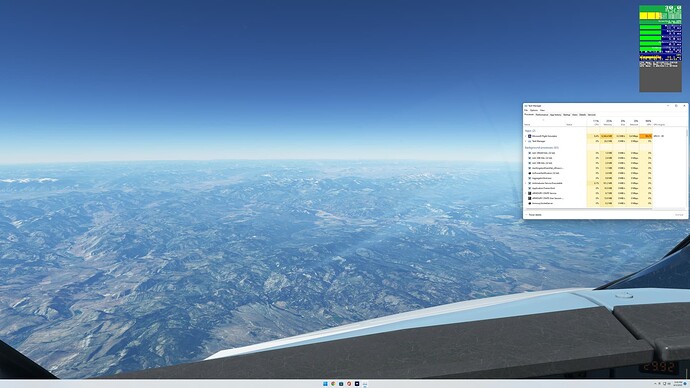 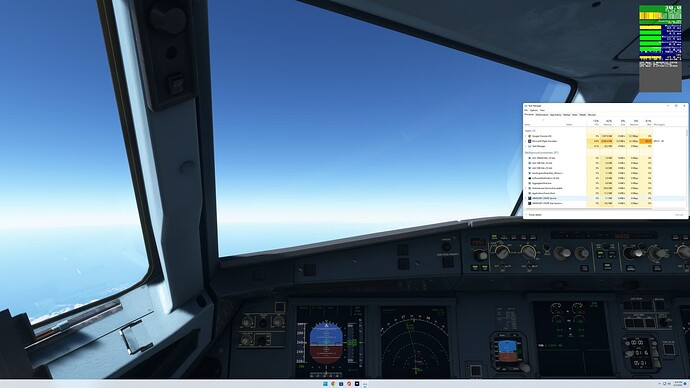 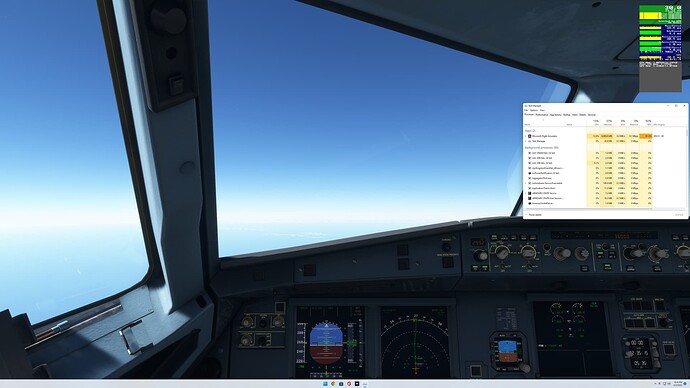 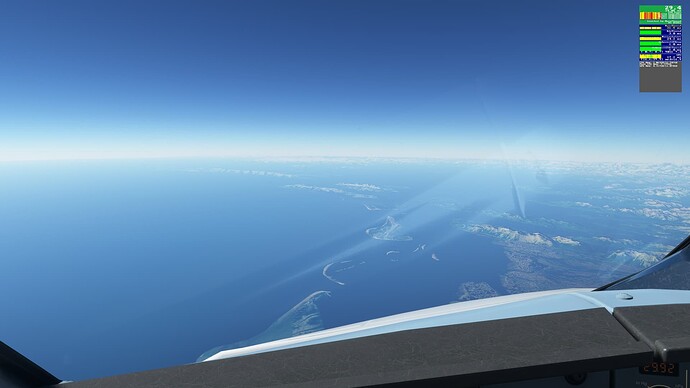 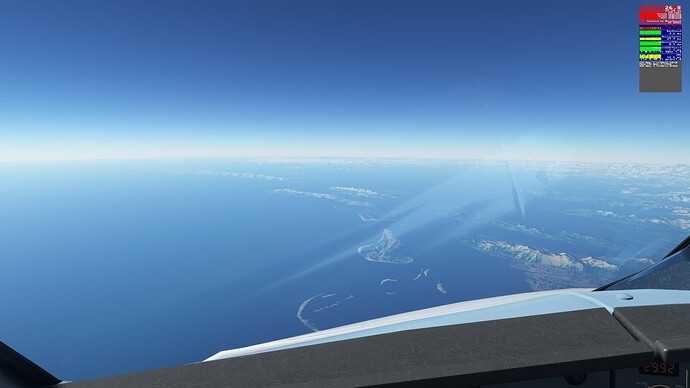 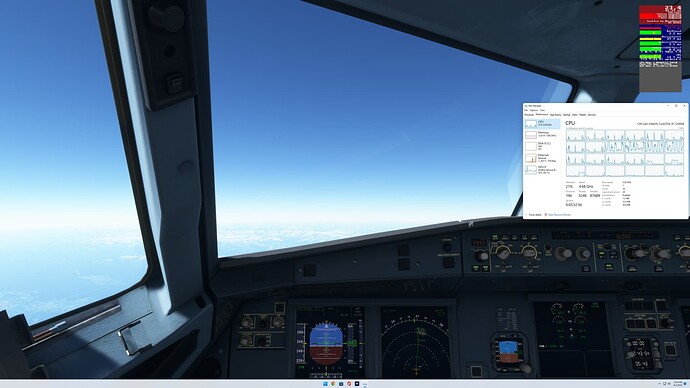 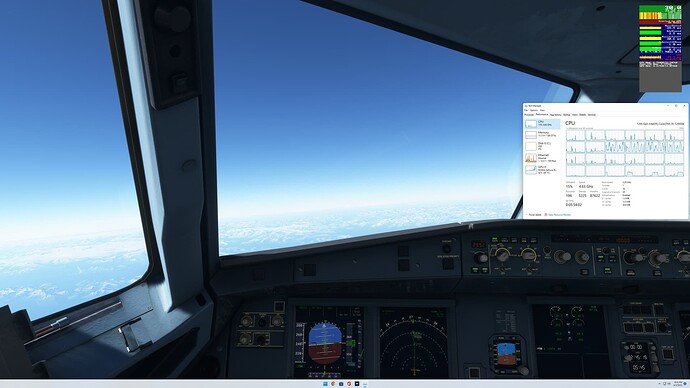 I turned on vsync in the simulator and limited the FPS to 30, here is the result. As I mentioned before performance degradation is not shown like before, because I almost always had FPS over 30 before. The FPS dropped to 23-24 from 41 miles to JOH, as soon as I passed the waypoint, jumped back to 30. Again after about 5 minutes dropped to 23-24 and then returned to normal and was 30 the rest of the flight. At the same time the GPU load was almost 30-40% then returned to ~90%. After landing I restarted my computer, then prepared the sim for return flight. I flew the same spots and passed the JOH at 37000, no problem at all. The last picture is taken when I passed the JOH waypoint. 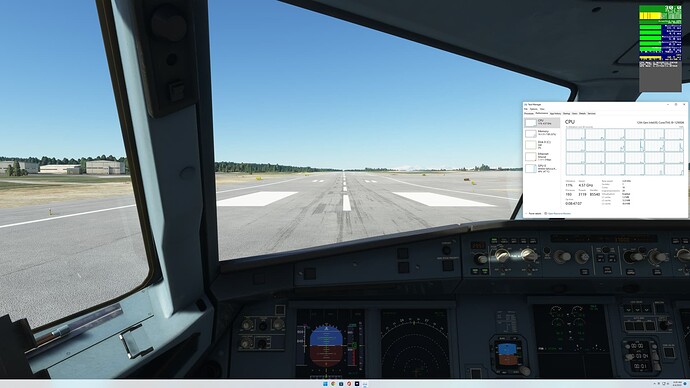 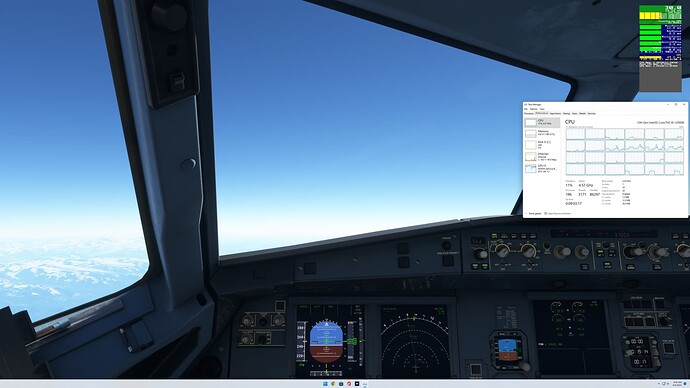 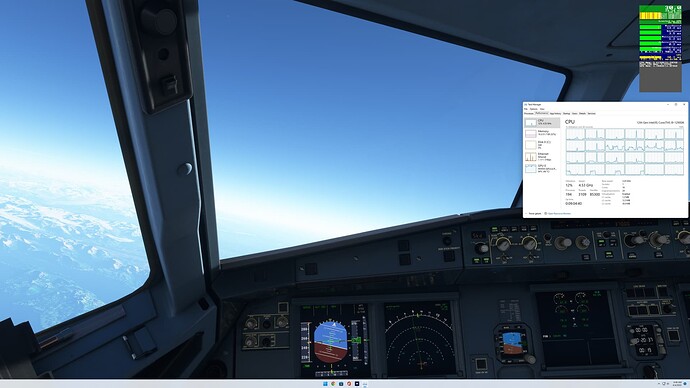 So, another flight, same results!!! I’m going to test different 6-7H flight/route later to see what’s happening. I don’t know how much would be my electricity bill this month

That’s strange, I had non of those issues during my more that 15 x test flights to PANC. It’s interesting that you had no FPS problem at the JOH waypoint. I may try 747 later to see is that A320 problem or what! Thank you

I hear you about the electricity bills! lol

Another test flight Sydney to Dubai (787) frames were around 50-60fps as that is what ive set and this time it was pretty much constant dropped to around 30-40fps as i was going to gate.

So it seems if Im setting my destination to Heathrow / Gatwick I will have a single figure fps landing jaunt which in turn makes me cancel the flight as that is unplayable.

Devs - Is this related to the area we fly then ?

yep, this is because the cpu core limits it

… and as mentioned, there are situations where I GPU limited and also without the vsync limit the gpu is able to give me 40-50 ( fps )… near 4K in ultra is just hard work for a 2080ti with the ultra settings.

… I try at least a less cpu demanding airplane in the PANC region to check what happens.

hmmm… something is realy confusing at your pc

if I see these error number and that your taskmanager show 25GIG memory ( which mean commited may be ~40gig ) I assume its out of memory. These memory consumption is not usually for MSFS and can of course cause strange issues ( also depend on your system ). With 32GIG RAM, your system will work extensive with the pagefile then. May be it is caused from your extrem screen resolution , but not sure. Also note what we currently test these in vanilla state, and it is realy long ago that I seen such kind of memory consumption.

EDIT: and I forgot to mentioned… I was not near the moon with my airplane in PANC/JOH region, more FL10 instead FL43… may be these have an effect.

Pagefile is managed by the system. He has often used more than 20 GB. The question is why the system does not manage the RAM properly. Better yet why MSFS2020 doesn’t release this. Only after a short time were suddenly 20GB gone. Within less than 1 min

It is difficult to determine why Windows is using the pagefile when your memory is only 50% utilized. FPS will drop when Windows starts moving memory to the pagefile. And Windows does move memory off of the pagefile back to RAM at different speeds. I think with 65 GB RAM Windows would clean out the pagefile very quickly.

Windows does manage RAM properly although it doesn’t manage it optimally for MSFS. Without knowing the details of how MSFS uses RAM memory, we cannot know why it doesn’t release some of its memory. Also, Windows shares RAM with the GPU VRAM.

now as mentioned I tried PANC region ( PANC - ENA - JOH - PAKA - 1Z9 ) with the Twin-Otter.
Also switched in-flight the vsync setting on/off ( started with , then off , on , off ) .
We can see, with the Twin-Otter I not realy get these low-fps-situation in the region. I assume this is what I guess, the Twin-Otter needs less cpu power of the mainthread than the a320 and so there is much more “space” and getting more fps… Without the v-sync limit I run into GPU limit. At airports it goes down…

Unfortunately this not explain your sitution… I can just not reproduce it :/…

haven’t seen , thought former you had 32

You can check whether windows use the pagefile. Easiest way is to open the windows virtual memory dialog and you see a value “currently allocated”. If you see with your 64GIG RAM something like 9GIG, then it is the default ( and you use may not much of it ). If you see a higher value, then something is not right ( in my case it goes never over my minimum setting of 1GIG ).

But independend of that… I realy not seen since a long while that MSFS consume 25GIG working set. Just open e.g. Resource-Manager and you can see the “commited value” ( “Zugesichert” ), which is much higher. It must be a reason why there is such a relativ high usage in your case. It must not an/the issue, but may be it can

These “20gig which are gone” is also an indication that somewhat is not ok with memory consumption ( and if the system have to clean e.g. 40GIG RAM, it takes also “a bit” time also in-RAM ). It is of course all a guess with the infos we have on “remote analyse”

The minimum they can do is responding to our hundred of hours testing and giving us a lead / guidance/ help or whatever to make it more clear and possibly find a solution.

It should not take hundreds of hours of testing to duplicate any problem. Maybe 10-12 hours for set up, test, and evaluation.

Screen caps of poor FPS show there is a problem but doesn’t help trying to duplicate the problem.

Duplicating the problem for me takes 5-6H but retesting with different fixes that are offered by other players took over hundred hours. Each time I change something, I have to fly again, wait for 5-6 hours to see if it’s happening or not. As mentioned before, it’s not happening for flights under 3-4 Hours “I’m talking about my case”. Also it didn’t happen during my test flight to/from SPJC. Almost 7H flight but no degradation at all, even 5%!!! So, what’s obvious is many of us have this problem more or less. Each of us have different hardware/software configuration, So it’s almost impossible to duplicate the problem exactly on all systems. BUT, if one system always doing the same thing and I can give developers access to it, why not trying to test that one to see what is the cause of the degradation? If they find something related to the Sim or system, they can work on it to find a solution. I can also install any diagnostic software they want and send them the logs.
Screenshots are taken to show what is happening when the FPS drops, what we’re trying to show is the CPU, GPU and RAM usage when this happens. We all know they can not duplicate the problem for other users.
I don’t know if you are one of the developers/support team or not? Regardless of the answer, my question is: Have you ever had such a problem or not? Have you flown the KDFW-PANC route to see if your system behaving normal during the flight or not? Specially the last 30 min.
W/O any guidance from developers we have no choice but trying different things to see if they are working or not, even if they are irrelevant to the subject.
Finally, if you have better ideas to narrow down the problem, let us know.

Strange enough I discovered that changing the pilots/copilots/instructors avatar in MSFS misc settings brings back FPS in some cases as they are degenerated… Probably someone can also check if that helps on her/his side?

You don’t think there are multiple avatars getting generated perhaps? Presumably something like that would show in one of the dev. mod debug menus?

Same as me, when I fly from PANC to KDFW there is no problem over JOH at all “As you can see in the picture” but, I always had crazy FPS drop/stuttering when I fly from KDFW to PANC . As soon as I pass the waypoint, the FPS recovers to ~40-45 but never comes back to +70 which I have in the beginning. My graphic setting is 4K / Ultra, I didn’t change anything there.

I typically fly 1 or 2 hour flights and when I am not using REX WF I don’t get this problem. I have many other add-ons in use, including AIG at a high % traffic injection. When I use REX WF, maybe 15 - 30 minutes into the flight, the FPS drops to between 5 and 10. I stop the weather sync in WF, switch on the native real weather in the sim, and my FPS returns to where it should be. Is this a simconnect issue, perhaps? Does REX WF use that? I have just tried the new Beta WF that has just been released and it is still happening with the new version as well.

I just did the LFBD to KSEA challenge and experienced this issue badly in the last hour of the flight and barely made it to landing. I used the B787 no mod as well.

Okay, this fps issue that we now have, was not an issue before update 8. No one complained of it before that update. What was done in that update that caused this problem. (asking the programmers that question).