I did the EGLL to LKPR with the default A320neo yesterday but missed LUMEN slightly due to my flight plan: 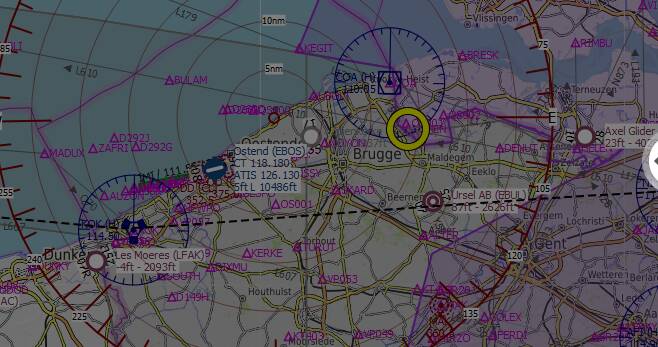 No performance hit around that area was noticed.
As I flew it yesterday evening, I changed the time to around 11am, i.e. no real time weather.
I then had to pause the sim overnight just before the descent, but even coming back to it this morning, fps was still as I left it, about 50fps. Memory usage about 11GB commited.
Fps then dropped a bit on the approach and landing and ended at about 40fps parked at Gate 8 at LKPR. Spawning back I got 52fps, which I also had during most of the flight at FL380.
So some degradation for sure, but no way near the unflyable frame rates some experience here.
I also flying with fps capped to 60Hz as it seems unnecessary to use higher fps than my monitor even if my graphics card sometime can produce it. Ultra and then Terrain LOD set to 100.

After landing and parked: 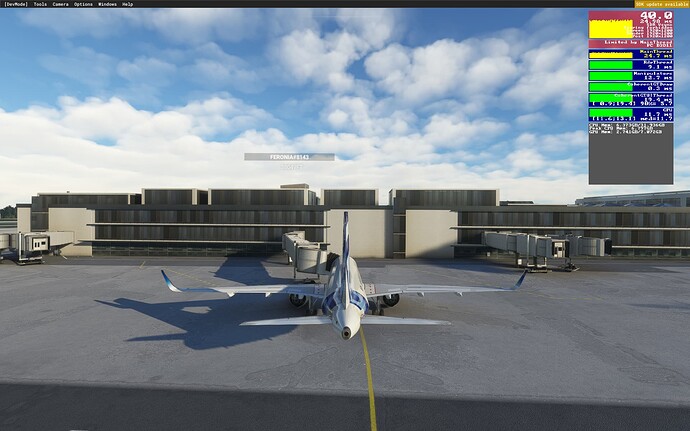 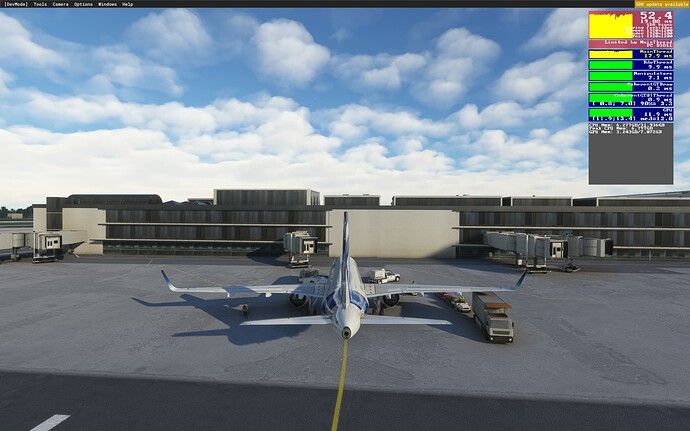 Yep doing ULLI to ULMM just now to test this. My CPU usage hasn’t gone above 30% and GPU not above 40%. FPS stuck no higher than 30 with no limiter applied.

not bad… so again a driver stuff related to the gpu… as mentioned the 30% cpu may be one core ( check single core view ) and this can you may be only avoid with lower some settings ( may be LOD ).

PS: this happens if users duplicate here single issue into different topics… the discussion is now more like a spider-net: Worse Performance - SU7 - FPS - #261 by Radioactivegoos

What aircraft were you using?

I tried it in the FBW A32N thats lower frames but similar result with GA aircraft like the DA42 and so on. Although with higher frames. But the GPU rollback and switching LOD to 150 instead of 250 has made it far more playable. But obviously not how its supposed to work. Because 250 used to give happy 50fps

Darn I hate this issue XD
It was all fine for the most part two months ago! What possibly happened?

I think the NVidea driver never really got fixed with the game, there’s something specifically in MSFS that makes those drivers not work…

I’ll try rolling my driver back next time I fly and update.

I’d prefer to be on the most recent driver that worked but I think that was like 20th November or so. But this july driver I mentioned above seems to be alright

last year nvidia driver “killed” Prepare3D… so its not specific for MSFS… the drivers becomes simple to complex, there is to many “useless” stuff in it. We see it just at the size of these so called “drivers”…

Okay I just checked, 496.84 was 16.11.2021 so I’d say its probably the most recent before the one that broke everything.
Its frustrating though. Things are supposed to work… apparently not lol.

I had 40 fps when i started the flight at a complex airport and at cruise level i normally have almost 60fps and limited by GPU. After 3 hours and 37 minutes into the flight and at FL380: 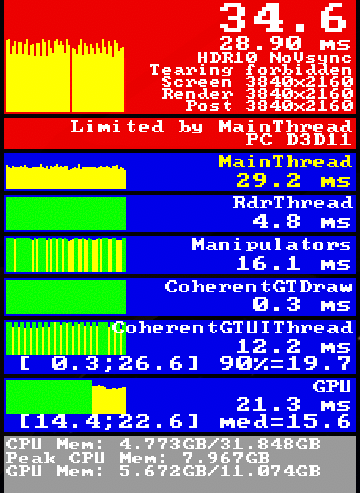 Something on the main thread stays active when it shouldn’t and it accumulates when the flight progresses. When i reload the flight the FPS is back to normal. For me this has been the case from the beginning and even with my previous PC.

It’s an insane issue and a huge oversight in my eyes. What this says to me is that the good people at Asobo are not even all-round flight simmers. They are those that fly low and slow and look at pretty scenery. That’s also pretty evident with the stock “airliners” they sold us. Unusable without third party mods.
There’s nothing wrong with that way of using it, but they have to understand that there’s simmers like us too who want to do properly simulated airliner flying.
I can’t believe they haven’t made an announcement of this issue. Sure it’s in the feedback snapshot “under investigation” but we have no idea what that actually means. I’d like a real announcement. Maybe its not affecting as many people as I think though, who knows. From what I gather it’s affecting most people in most every plane.
I’ve said this a lot, but again, if they want to keep this crowd for when X-Plane 12 comes out they’ve got to fix stuff like this.
Cheers

If i were Asobo i would run a bunch of PC’s 24/7 with long flights running to see what happens.

In the debugger they should be able to see how much frame time every task is using.

That’s just my thoughts as well. When you’re at FL380, what is the game even rendering/calculating?
Surely less than when you’re at the stand at a detailed payware airport, no?
That’s what’s aggravating about this issue to me is that it seems like it shouldn’t exist at all.
I’m not a game dev, I could sound reaaaally stupid to a dev right now, but to an amateur computer hobbyist it makes no sense.

Now i landed in Kristainsand, Norway after 4 hours. 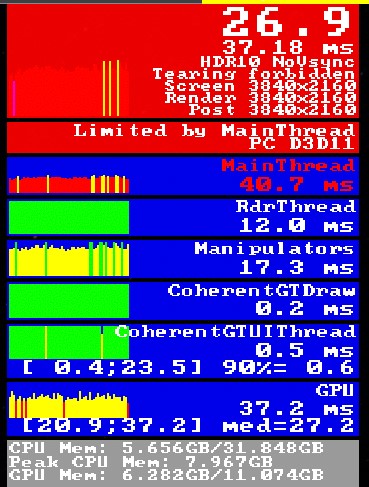 And i go to the main menu and start a new flight on the parking in Kristiansand: 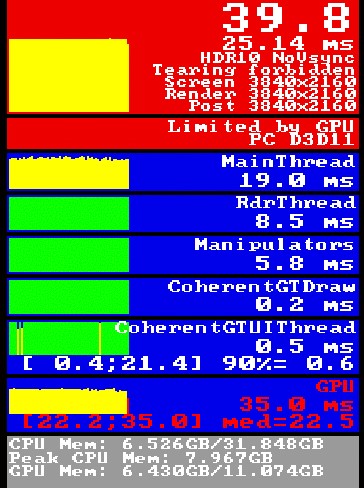 Mainthread frametime has doubled after a 4 hour flight.
After a restart it went from 40 to 19ms.

These are interesting findings. Thanks for your effort.

“Manipulators” has almost trebled as well. I wonder if that is the root cause?