If you venture close to a busy hub such as Heathrow, Frankfurt, Schipol etc, or it doesn’t even need to be in these sorts of places, it can become a real issue communicating with ATC due to the fact it is continually berating AI aircraft to expedite climbs or descents. You can find it really hard to get a word in edgeways for the nagging ATC also telling the AI planes they are 300’ above assigned altitude for example. I’m all for realism but this goes beyond common sense. If airline pilots were getting these numbers of ATC reminders they would have been sacked. I have tried turning down the number of AI aircraft but on occasion it still be so bad my IFR clearance can be cancelled due to my inability to communicate. The devs need to tweak the ATC messages otherwise I’m going to go mad.

I’ve stopped using ATC altogether. It’s not realistic and it just started getting on my nerves and lessening the enjoyment of the flight.

Are you on Steam or Microsoft Store version?
Microsoft store

Are you using Developer Mode or made changes in it?
no
Brief description of the issue:
AI traffic keeps being told to expedite climb or descent. The calls are repeating endlessly, blocks the frequency, and makes ATC center frequencies almost completely useless.

There have been related issues in the past, such as the user being told to expedite climb or descent. AFAIK those issues are now solved, so threads talking about those issues are no OBE. But the AI traffic issue was never solved.

Provide Screenshot(s)/video(s) of the issue encountered:
n/a
Detail steps to reproduce the issue encountered:
Go fly, use live weather (might not be necessary), have offline AI traffic enabled (not sure if Live traffic has the same issue), use ATC (flight following is sufficient), tune a center frequency. Might have to wait a while for it to be populated with traffic, but pretty soon the carnage starts.

PC specs and/or peripheral set up of relevant:
n/a
Build Version # when you first started experiencing this issue:
Many months ago

Has there been any acknowledgement from Asobo whether this is being looked into? ATC is a complete joke when AI traffic is enabled, just see the below screenshot.

and still is persistant after SU7. I have been using Live Traffic the vast majority of the time and haven’t had this issue. I switched to AI Traffic to see how it looks (I also have Simple Traffic installed which recommends AI traffic on) and am now bombarded by ATC messages to other AI traffic not complying with altitude changes. It’s endless. I’m going mad. Back to using Real Time Online ‘Live’ Traffic for me as it doesn’t have this maddening insanity inducing bug. 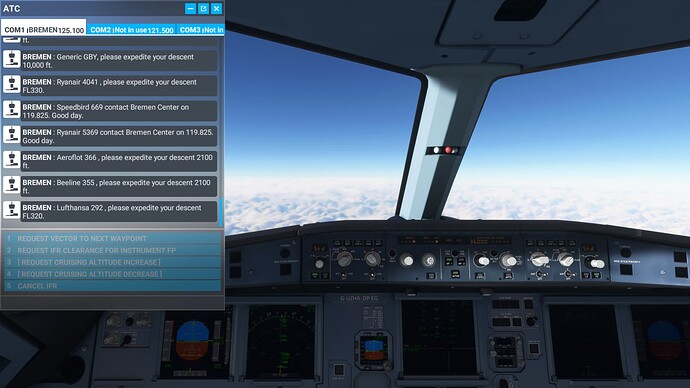 The last few times I have flown with AI traffic on, I have watched them with Little Navmap running. When ATC calls to a plane to expedite the 5000ft, for example, I will find that plane on Little Navmap and it will show the plane’s altitude as 5000ft.

So there must be some breakdown in how the data is passed through the layers of software. The plane thinks it’s at correct altitude, so it’s not listening to ATC and the constant chatter continues until you get tuned to a new frequency.

Or maybe there are surface pressure issues in the weather forecasting cropping up. I encountered one of those last night. ATC telling me to climb to 10000ft when I’m at 10300ft and after originally telling me that surface pressure was 29.92 (see top of this transcript). I looked up surface pressure online after getting nagged and found it was 29.43 or thereabouts, changed it to that value in the sim and climbed to the ‘new’ 10000ft and the ATC stopped complaining. If they had only told me correct surface pressure then this wouldn’t have happened. Maybe something similar is happening with the AI traffic. 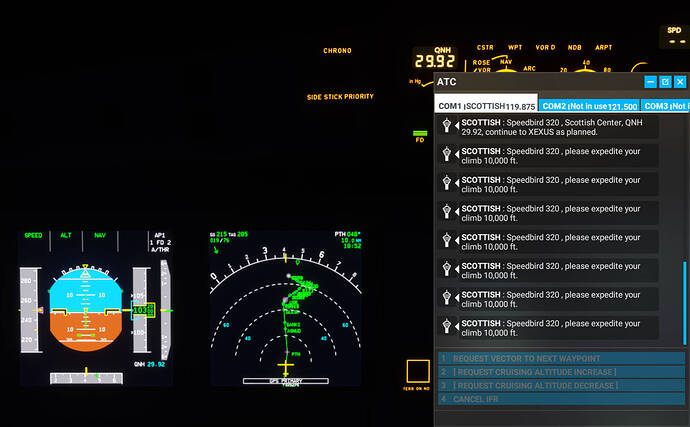 Is there STILL a problem with this??? Or did they just disable the command to avoid fixing the real problem? I have not been told to Expedite, but I see ATC reporting me, as traffic, 500 feet higher than I am, at 29.92. 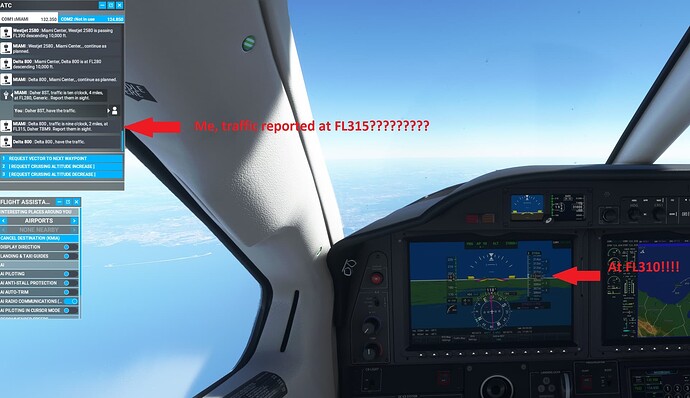 the reason for this is quite simple:

AI Airplanes always use the same barometric pressure. Over at AIG we are currently investigating (actual already testing) a fix for this that will be included in our AIG Traffic Controller. For now we are able to fix the callouts above FL180. For the once below FL180 we have the code ready, but are getting some exceptions within SimConnect…

I use an app called “FSPM VFR Map.” It’s actually a VFR map, as the title infers but it also gives you vital info about the flight including current altitude / barometric pressure.

I keep it open all the time as I’m flying so I can see if the pressure changes. I don’t use the map section.

If the map is open, simple click the arrow to slide the info section over the map.

The sim with SU7 still has issues with altitude and barometric pressure but we can’t do much about that right now. But if ATC starts squawking about you being 300 feet high or low, you can just make a slight correction in barometric pressure to shut it up.

The app is no longer being upgraded. I’ve been using it since SU5 and have found no issues with SU7.

Since my original post in this thread, I’ve changed to live online traffic, and the silence is golden. No more expedite commands over and over. I’m going to leave it this way.

What’s the downside to online AI traffic? I haven’t noticed any so far. Is it not compatible with third party real-world livery mods showing on traffic?

What’s the downside to online AI traffic? I haven’t noticed any so far. Is it not compatible with third party real-world livery mods showing on traffic?

Neither of those issues are something Microsoft/Asobo can ever fix, they are fundamental problems with the whole live traffic concept.

For those reasons I see live traffic as a niche thing, fun at times but not really viable for many simmers most of the time. Offline AI traffic is the concept that works, using real-life schedules for airliner traffic and realistic but random schedules for GA traffic.

No change with latest update and traffic. AI or Realtime, the traffic does strange things, like so many doing missed approaches continuously, and then very low flying way off course cutting across the airport, then vanishing.

This is absolutely rediculous. This is my screenshot: 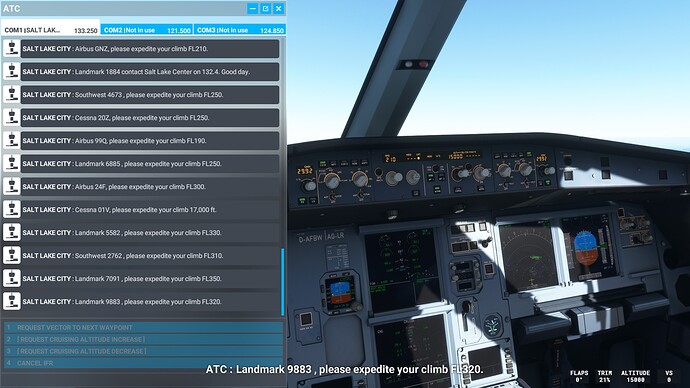 I’ve switched to online traffic to make It all go away… I think either AI online or real time online doesn’t suffer from this.

I have been testing this for a while now both with AIG’s solution, also with just the built-in stuff in MSFS, and the results are as follows. When it comes to the real time online traffic there’s no such bug present (at least not for me, and since I do not speak for the entire community I’m just sharing what’s going on with my exact setup)

All of the rest of the traffic solutions that are meant to be used offline, or are offline by design have the bug, and honestly at this point it is getting a bit ridiculous. I’m glad that I have seen the post above from the guys over at AIG about a fix for this above FL180 that would already help quite a bit, especially in crowded airspaces.

And at this point I’m disappointed in the product because of this bug that’s still present (not to mention plenty of the others that have either been fixed somehow or that are still there that may be “hiding”) and while I’m happy with flying around in the FBW A32NX, the fact remains, that sometimes I’d rather fly around in complete silence with just my plane being the only one in the sky on the entire planet. Just to make sure that I don’t have to listen to the constant “please expedite your climb / descent” from ATC.

And I know that other forum posts dealing with the same thing would suggest VATSIM, or IVAO, or any of the other online ATC solutions with real people. Unfortunately due to the situation that I’m in, it would not be possible for me to use those services (as much as I want to). So this topic definitely earned a vote from me.

And I just hope (even though I doubt it) but I still hope that there’s going to be a fix for the issue at some point in the near future.

In the meantime I will give this mod a go just to see how it is and maybe, just maybe that will be the solution to my problem. 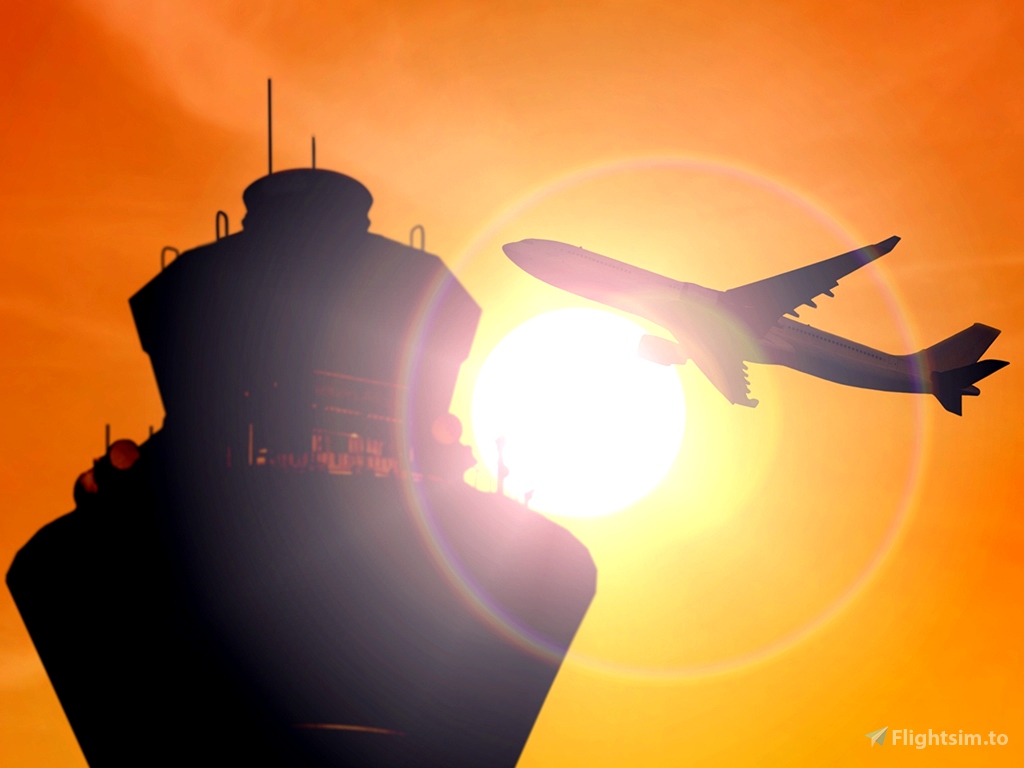