Six airports I’ve created now cause an instant CTD since this world update. They were all absolutely fine before.

I have no idea why and there’s nothing I can think of that’s different about how they’ve been made compared to the ones that still work.

Don’t think I’ll be putting much more effort in in future if hundreds of hours of work are chucked away with every update.

It would be fine if a straightforward fix was available. Not this time so far.

It would be a great shame if you and other people like you pull out of creating super scenery. Asbo have got to sort this out. I thank you and all the others for all your efforts in making this sim as real as possible.

I’ve found 2: Bastia and Rotterdam. What about u?

This issue is already discussed in this thread, a workaround proposed for LFOU

Ok, I figured this out. This can happen with any add-on scenery, whether purchased from the Marketplace or downloaded from the interweb (e.g. flightsim.to) and added to your community folder. And you can fix it yourself. It’s quite straight forward. What’s happening is that sometimes scenery developers are leaving behind some of the default folder names as they are initially created in the template for a scenery project. Then later, when you have more than one of these scenery addons instal…

It’s a pure world update 4 problem for all the people who’ve reported it to me. And all of the relevant folders already had unique names for my efforts.

I seem to have cured most of them by building a new project with the new developer kit and transferring the info across, but that doesn’t explain why certain ones don’t need that.

LFBD also causes CTD to me.

What I find interesting is the following:

It is the last part that I find interesting … as it means that the 3D model of the airport does work in the sim without problems … unless it is the initial load.

Anybody else seeing such behavior?

Side note: My “airport CTDs” do not seem to be restricted to add-on airports. I had this with the commercial FlyTampa Sydney Intl. (YSSY) … but also with a totally autogenerated airport in the middle of Venezuela

Hmm … seems like my crashes are less reproducible then I expected.

Sometimes they CTD … sometime they do not.
Since there are no commercial or free add-on in that region those CTD events can not be due to wrong 3D data.

Now I do run on DX12beta … and the “random” nature of the CTDs feels like there is some race condition during the initial asset loading phase which might be the cause.
If things get loaded … then there are no problems at all.

Dear developers! What about the UUEE(Moscow, Sheremetievo) Airport from
Drzewiecki Design ?
. I have wrote about this problem a long time ago and no changes have made, since that time! It still have problems with very low FPS and CTD cousing. Can’t taxi and fly normaly like I 'm doing in all other airports without any problems! The Drzewiecki Design developers on forum told me that it’s not their problem, but problem of MFS 2020, which they can’t fix! Please, check it out and try to fix it! Very good airport - I think, on of the best in realism, but this problem don’t give a chance to fly normaly! Thanks!

I have just seen this “CTD” in a slightly different context (and aircraft) … which for me actually is typically more like a “GPU driver” crash.
Since SU10 we seem to get a “nicer” crash alert. For me it looks like this: 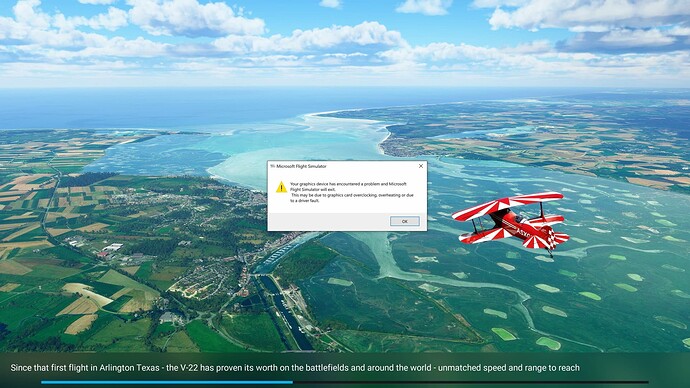 Now this case of a crash caused me to think about what crash we are seeing … and I suspect that there is:

What makes me confident in this is that with aircraft, there is the “My Hangar” test (which does not exist for airports). In the “My Hanger” case the MSFS loads a simplified version of the aircraft … where on the 3D object is loaded … no glascockpit code or flight physics etc. …

That aircraft craft is 100% reproducible

… and one more observation.

I still suspect that at its core this is a race condition when loading 3D assets into the GPU. But perhaps … just perhaps … live weather plays a key role in this chain of CTD events.