Cloud Cover and Visibility reported on ATIS do not match the conditions seen in the sim when using Live Weather.

This is not to be grouped with “Live Weather is Inaccurate” reports. Regardless if live weather doesn’t match real world conditions, if it’s overcast in the sim, the ATIS should report overcast. 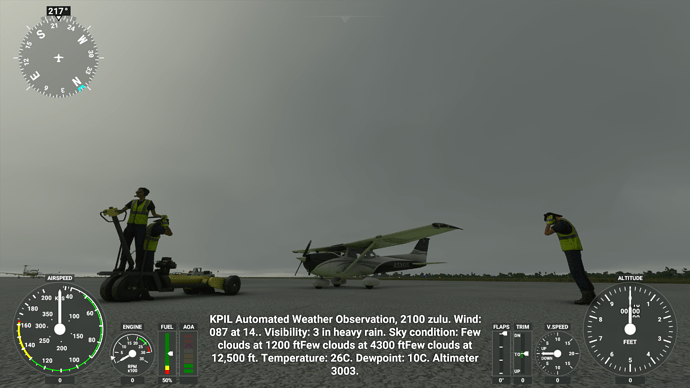 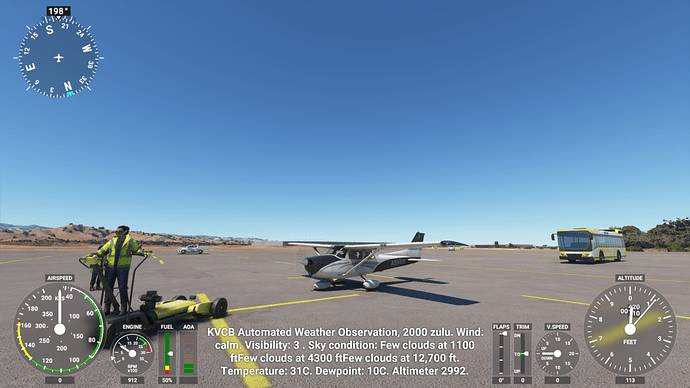 Additional Context as to why this is important:
Pilots tune to the ATIS prior to takeoff/landing to know if it’s safe. VFR Pilots cannot fly if the cloud ceiling is less than 1,000ft, and visibility less than 3. That’s why we rely on the ATIS frequency.

Tried this. Makes no difference for me. Selected KMBS which is currently reporting 250 10 Gusting 17 kts IRL. After following what you suggested still showing 231 @ 7 on the in game menu. Once spawning at the airport the ATIS gave the usual bogus report (although I will say the surface winds did seem pretty close to reality) Wind 247 @ 14; Vis 3sm; Few Clouds 1100, Few Clouds 4200, Few Clouds 12300 (this never changes); Temp 26; Dewpoint 10; Altimeter 2991. For reference the real reported we…

Jep, weather seems a complete hit or miss. It doesnt fit to the ATIS too. Like it can happen you have clear skies but ATIS tells you 4+ cloud layers.

I’ve had the same atis every single time at any airport I’ve been to. Can’t understand how something so fundamental to the core of the sim is so broken and they are allowed to get away with releasing it in such an incomplete state. And no mention of any fixes for the live weather problems. Have reported the ATIS bug to zendesk. Totally unacceptable.

Same for me
I hope this will be fixed

Agree that this is a major issue…but uhh they did acknowledge the problems. In detail actually, and say it is already “significantly improved” to be released on the next patch.

It’s been just over two weeks since the launch of Microsoft Flight Simulator and the team continues to transition from release focused work and back into feedback ingestion, bug fixing…

Not sure if you’re replying to my issue saying they acknowledged the problem, but to be clear, I’m speaking of the ATIS and its report of the depicted live weather.

Whether the live weather data is accurate is a whole different issue. If the sim shows it’s overcast, I want ATIS to tell me it’s overcast.

Yeah thats true. For the first time yesterday I had it NOT report 3miles visibilty. Did the usual 3 layers of cloud layers. Always at some 100 ft interval too. 4,100 10,100 etc. very strange

I think this may be tied into the problems with real-world weather. ATIS Always states the sky condition as “few clouds 1,200, few clouds 4,300, few clouds 12,500” regardless of where the clouds actually are. ATIS also always says the dewpoint is 10C, which is rarely true. Wind, temperature and altimeter seem to come through correctly, although the wind itself doesn’t get properly represented when real-world weather settings are used. Amazing these bugs made it through multiple beta cycles.

Same here, oh and guess what I installed patch #2 yesterday and Asobo did nothing with this bug. ATIS info is still incorrect. bugs bugs bugs…hope devs read this forum and soon make proper fixes.

I have this problem still as well.

Thank you for this post. I’ve had this same problem since day one.

I think this is a general bug with ATIS rather than live weather itself. No matter where I go in the world ATIS always reports 3 layers of clouds when using live weather and just 1 cloud layer when using preset weather.

In areas where the live weather actually has clouds, it is not obvious that the ATIS information is incorrect. So the bug becomes obvous where there are clear conditions or few clouds. I first noticed this at Denver KDEN where cloud layers were reported at 1200, 4200 and 12400. As Denver is at 5400 feet, 2 of the reported layers were underground. Looking outside the cockpit, the conditions were clear over the airport with clouds to the North, which didn’t seem too far from the real ATIS reports.

So my conclusion is ATIS is unreliable for clouds at least, although live weather does appear to be populating the skys with appropriate clouds, based on local conditions. Although I believe that the live weather (like live traffic) is more likely delayed somewhat, rather than actually live.

Perhaps just an oversight…I ABSOLUTELY agree with your findings and agree that the system needs fixin; however, ATIS reporting of cloud layers is not in MSL, but rather AGL.

Learn something new every day.

Had this problem as well.

Looked out the window in Copenhagen this morning and it was foggy as hell. METAR info online said visibility 300m and fog. I loaded up FS and the ATC told me it was IMC conditions no VFR allowed, so obviously it was loading in the correct situation, but it was clear blue skies and no clouds in sight. Very strange!

I am looking in to the exact same issue and was going to ask here. Looks I am not the only one. I tried several places with fog, and all I get is blue skies.
Any idea would be nice. If any…

Just to clarify, this issue is about ATIS being incorrect about the conditions as seen in the sim.

What you seem to be describing is an issue with live weather not matching real life conditions. This topic is independent of that - simply about the ATIS Frequency.

Hello, yeah I saw this afterwards. I might start a new topic for this. The sim actually seems to match the weather very well. Only fog seems to cause issues.

Same problem here. The pattern few clouds at 1000, 4000 & 12000 is occurring almost everytime and everywhere, regardless of what cloud layers are depicted in the sim.