Post a departure/destination you’ve had troubles with. I’d like to try it. The 78X is the plane I’ve spent the most with, so if it’s off, I’d likely notice. I’ll create my own plan in Navigraph, but it should be relatively close to what you’re using. I’m curious. Aside from the fighters(F-14 and 15), I’ve found that the 78X works the best for me. Quite consistent.

KATL - Ramp, for cold and dark startup. to KBNA or KMEM, I try to use STAR closest to my heading toward that field, then the closest ILS runway for that STAR. I use ATC, and that is part of problem. When game first came out, the navigation/ATC instructions took you past AP. It’s I think been fixed, so KBNA, now I think works. I have been concentrating on the F-14, because needed break from frustrations. Once I get that one down and learn navigation in it, will again fly that route to see how it works. Please message me on your results. I get approach plates from Sky Vector, use the STAR as mentioned, I create the Flight Plan in world map, as that puts some of data into FMC, and not good on it yet. Should note: FSX does not implement FMC systems. I have not owned XP long enough to know if it does or not. I am going to assume, that data entry into any FMC is similiar. Also note: The AP-FMC in 747 is identical to 787, so if you know one, you know the other. Regardless, the input process should be the same. Some buttons in MSFS FCM’s do not work, not programed to work.

I did use 747 for that Plan. I do not like the way the 787 performs, and think FBW may be the reason, plus it appears that Asobo’s implementation of the dynamics of 787/747 is incorrect, so it does not fly the same as XP-11 or even FSX. To their credit, they did implement (I think) more real-world processes into those planes, as you must have the correct data in the FMC for it to perform correctly, I THINK. So, I am trying to learn how that works and how to program necessary information so plane actually performs like it should. I am still working on those things.

Someone mentioned in a thread, the “type of coding or structures used” by asobo is not the same as XP or FSX (FSX I get it is almost 20 years old), regardless that “code” makes it difficult for me.

FWIW-Last evening flew 737 in XP after only 2 days on PC. Took off from KMGE flew around, put in ILS into Nav, lined up on RW-Glide Slope, and landed just like a pro, and like the thousands of times I have done so in all my years in sims. MSFS is the only sim, I have difficulty in, don’t believe I have lost touch. Did C-17 flight from Kabul, Afghanistan to Jackson, MS via many AP’s in western pacific, Guam, PMDG, HI, Travis, CA, Nellis AFB, NV, Yuma, AZ TX, and home. Not one time did I have navigation issue in FSX. Downloaded new scenery for PMDG, and now there is a B-52 in middle of taxi way, which I ran into not realizing it’s real enough to cause crash. Thank you for reaffirming my suspicions this is not right.

KATL to KMEM on deck…I live near KAUS, but KMEM is my home. I know the airport well. 787X on auto pilot. Got it. I usually turn off the AP just before touchdown. I prefer to control things at that point. Be back soon… 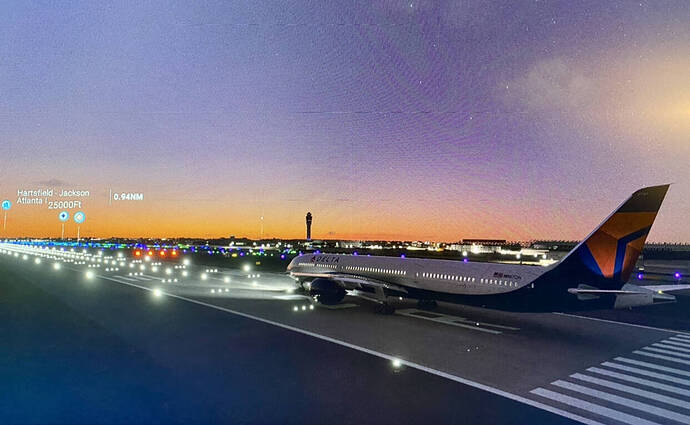 Wonderful Picture, how do I take screenshots? As aside, within 200 miles of KBNA. KATL is closest intl airport from me, used to live in ATL.

This is really a simple fix – increase your deadzones on ALL in your setup and problem will be solved, 9 times out of 10.

I took that with my iphone. Any screenshot I take on my PC is nothing close to what I’m actually seeing. Was told it has something to do with me playing in HDR, but I also have a 49" UW panel. My resolution settings aren’t “normal.”

Taxiing from 36C to the gate. I use this runway daily for test flights. Easy trip. I used AP from shortly after takeoff until just before touchdown. Routine flight.

I do not like the way the 787 performs, and think FBW may be the reason

That’s exactly the reason. If you hand fly the 787 it handles like the MSFS A320 because Asobo turned the previously nice handling Boeing into an Airbus with SU3.

Wow, hope they fix this thing. With phone, never would have guess that. Know their is a way, will try tomorrow if time. Have things going on. Life.

Well, I’m relatively new to MSFS2020, but I have completed all the training flights and two bush trips. I’ve also watched several YouTube videos on the 747 autopilot use specifically. My success rate getting on the ground is basically zero.

What is most frustrating is that I can’t tell if it’s my overall lack of experience and understanding or the reported bugs with AP that is killing me. I guess both? How do I tell if I’m doing it wrong if it doesn’t always work to begin with

My first two attempts I was unable to use AP to descend to the approach. I just overflew every waypoint. After reading this forum, I attributed that to trying to use VNAV during the flight, which I guess has been broken forever. (LNAV has always been solid for me).

Third flight, I vowed to never touch the VNAV switch and then I got a CTD before I got to the approach. LOL

Fourth flight I controlled altitude with FLC and generally ignored ATC. I followed the pre-loaded flight plan created from the World Map. I actually enabled approach mode and caught the glide slope. It brought me down to 28R and missed 28C! I had the glide slope assistance turned on so it was showing me exactly where the plane should be (displaying the floating boxes that you follow), yet it sent me to the wrong runway. I missed and aborted.

Fifth flight, i started too close to the airport and couldn’t drop altitude fast enough. My dumb mistake.

Sixth flight it again brought me down on 28R. I disengaged AP and disengaged auto throttle and actually got it down somehow. All of my passengers will request a refund!

Don’t get me started on how impossible it was to taxi this plane, too. I could not turn sharp enough to stay on the taxiway. Gotta figure that out.

I was so frustrated at the end of it all. I’m going too rewatch the online videos and see if I’m missing something obvious.

Don’t get me started on how impossible it was too taxi this plane, too. I could not turn sharp enough to stay on the taxiway. Gotta figure that out.

As IRL, for sharp turns you need to slow down to ~5kts, in MSFS preferably even a bit slower.

I didn’t have much luck even at glacially slow speeds. I was trying rudder control to steer, then tried using individual wheel brakes (NUMPAD * and NUMPAD -) in conjunction with rudder and I couldn’t make all the turns, nor was I able to get oriented with the jetway. I parked sideways! Maybe if my passengers can’t get off, they can’t get me fired…

That’s strange. I’m never using the brakes to assist in turning.
Very sloooowly increasing rudder input only.
If you add rudder too fast, she will immediately start skidding.

I fly the default 787 and generally have no issues. Im not a rlp but do take notes from responses from PZL 104 and Neo, also I followed this video from a Boeing 787 pilot and 320 pilot (15) Learn the Heavy Division 787 with a Real 787 Pilot! Full Flight Tutorial MSFS - YouTube flying the Heavy 787 Mod…I use the video now as a constant referance point…and then just applied the principles to the default not all translate over but I am managing to successfully complete flights capture ILS using VNAV, LNAV etc 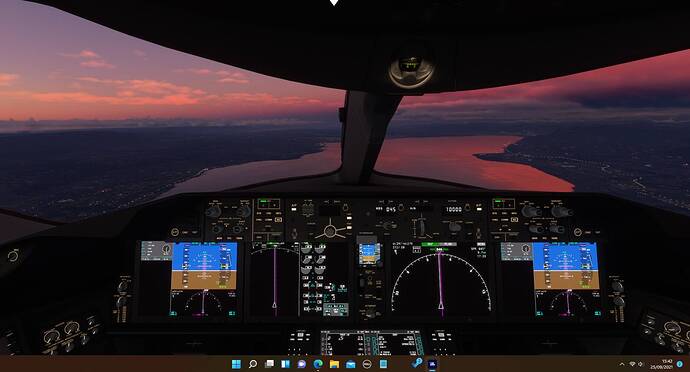 I’ve got more hours in the 787 than any other aircraft in MSFS since launch. The AP, while not perfect, is reasonably serviceable these days. With the Heavy Division mod, it’s much more detailed and immersive, but even without it, the stock 787 post-SU5 willy fly KATL-KBNA just fine. I’ve done it myself a dozen times or more, plus the reverse (I live in a suburb of Nashville and like flying over the local area).

The autopilot definitely is affected by deadzones in MSFS. If your deadzones are set incorrectly and an input is given with the joystick centered its gonna overrule the autopilot and fly in circles. It shouldn’t be this way, in real life you can’t physically move the controls when the AP is on. MSFS therefore should ignore manual control inputs with the AP engaged. For now you need to have your deadzones set correctly.

Well, enlighten us to what the settings in the dead zones might or should be. Mine have stabalized since the “set bindings” came out I think SU/WU4 or so. Upon release they were mess. For what they are the planes (airliners) fly ok, not like FXS and XP-11.

How should @Nijntje91 know?
This depends on the individual joystick and e.g. for how many years it has been in use.
You need to increase the deadzones until this problem doesn’t appear anymore.
Or the other way round. Start at 25% and reduce the deadzone until the problem starts.

it was the deadzone. when i set all deadzones above 15 it started working. thanks for help