My 787 after take off engage AP and the plane turns left goes round in circles , any fixes thanks.

Suggest to increase the deadzone on your joystick axis a lot for troubleshooting, or even disconnect it.

I have the same problem major problems,mine won’t intercept lnav…lnav in white in the flight annunciation but the plane flies where it wants really annoyed .

Can not confirm it with the lnav problem. I load it via simbriwf, also departure and arrival with rwy and stars. It is important to execute the flpn.
Even vnav is working during approach. Only thing what happend to me is that on approach the plane goes crazy and not flying not ro the next waypoint so an approch is not possible.

Have you tested with an unplugged joystick to rule out any hardware problems?

it was the deadzone. when i set all deadzones above 15 it started working. thanks for help

Similar problem just started for me. I experience a track offset of several miles until well past the SID route. Then it goes back on track.

I was usually under the impression that APPR can’t be used for RNAV. I always use a manual glide path descent angle once I passed the specific waypoint on the charts.

Roger! With RNAV there are different types of approaches (lateral, lateral+vertical, etc.) and they will be indicated on the applicable plate/chart. LPV in particular provides vertical guidance like ILS with lateral. Pressing the APPR on an ILS approach will reflect LOC G/S (Glide Slope) in the. PFD. On a RNAV LPV approach, G/P (Glide Path) will be shown.

I’m attaching a handy little reference I came across for a visual aid. Hope it is helpful! 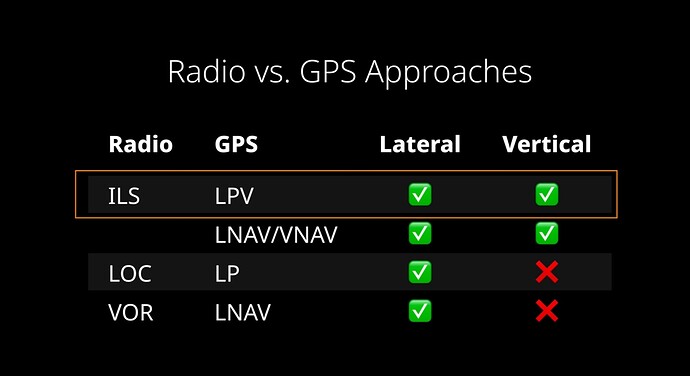 I have also the same issue, aircraft banking to the left and not following either LNAV nor heading. Is the opinion still that this is a flight model option problem? Is it the same for the stable and dev. versions?

Same issue to ight, heading from LAS to SFO.
Got out, jumped in A330-900 and flew perfect all the way!

Guess if its Boeing, I ain’t going!

I did a flight in it yesterday and I think the latest dev version has this sorted out. It is still a little buggy occasionally when switching from LNAV to heading mode and visa versa. I found the solution if the LNAV had trouble engaging was to simply enter “direct to” the next fix and then re enter the old fix back in. Overall the mod is working great for me now though

Same problem. Cannot switch from LNAV mode to CAP mode. The planes do not follow the course. Impossible to avoid thunderstorms … I cannot find the solution. And worse, I don’t know if it’s me doing things wrong or if it’s the system that’s bugged.

The solution is here

Hi All; This is my 1st post so I am new to this forum but not to flight sim. I implemented the sim on the 16th. Nov 2021 so I had a fairly updated version on initial install. The problem I am having is, for the life of me I can’t get the heading to engage on both the 787 and the 747. I engage the auto pilot about 5,000 feet AGL, set the altitude, VS, Airspeed (auto throttle on) and everything works except the heading. I select the heading with the wheel of the mouse and then left click, righ…

That’s just a workaround, isn’t it?
It is still unstable in LNAV mode.
The aircraft deviates from its course frequently.
Are you all aware that this solves this problem?

I haven’t noticed the 787 “deviating frequently” when I fly it. But I am using the Heavy mod.

Thanks for your reply.
Is Heavy Mod what you say about the B78XH?
I’m using B78XH ver0.1.13 and there is no improvement.

I tried that but it didn’t help.
So I thought it might be caused by my CH YOKE chattering around the center, so I set DEAD ZONE and tried it with B78XH ver0.1.13, and as you said, it works very stable.

Finally, the issue has been solved. Thanks so much for your suggestion.