And to be honest : I’m not that impressed.

Colors are better and objects in the distance are sharper.
Yet in cockpit the lettering is very very hard to read.
Worse then with the G1.

Anyone have any idea how to solve this ?

(I’m already running a higher resolution in FS 2020 then the resolution of the lenses.)
Also, OpenXr is up to date, using most recent runtime and custom render scale is 100%

Render scale 100% and OpenXR minimum 80% and is sharp as hell… No probs at all. Have you check your IPD as well?

Found it a couple of hours ago, thanks

Doesn’t matter what I do now, it keeps stuutering and locking up.

With your hardware you should be able to run it with very good FPS. Sounds like you have a lot of tweaking to do. Go through captain’s guide if you haven’t already.

Go through captain’s guide if you haven’t already.

Already found it, thanks

VR flight sim guy also just posted a video about his cockpit being blurry with preview enabled after the latest OpenXR update. May be something that is also causing you issues 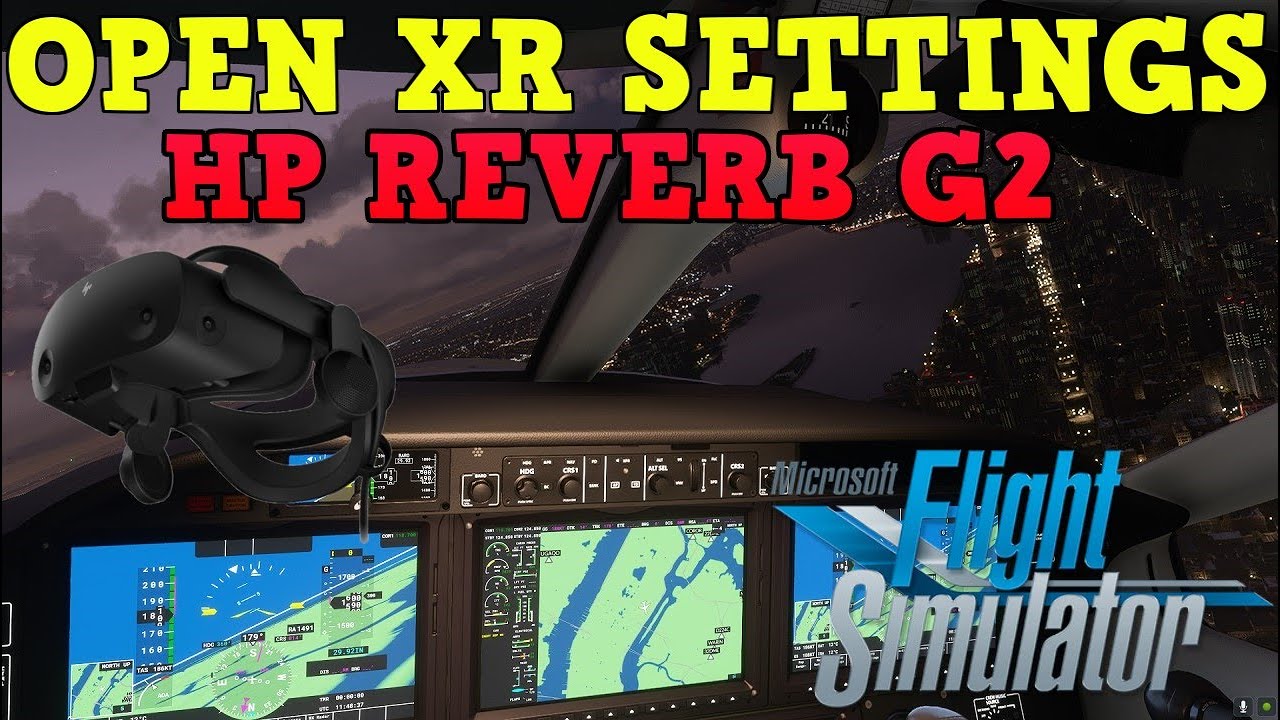 Well I can also confirm that today, my first flight after the UK update and latest open xr update I cannot see the knobs clearly… I am flying the FBW custom version, 80 RS in open xr and 100 RS in the sim and even if I push the RS to over 120 the cockpit still looks blurry! At this point I am thinking my 4K monitor gives a much more beautiful image than what my eyes are seeing through the HP reverb G2 lenses…

Huh, interesting - I had noticed the text on cockpit textures was looking oddly blurry (strangely the displays are still sharp) recently but thought maybe I was going mad… I need to experiment trying the non-preview runtime.

Edit - nope, I was mad. Don’t see any massive difference in clarity between the two runtimes. I think it’s just having played IL2 recently it highlights the blurryness of the TAA in MSFS.

So finally got the Reverb G2 up and running.

Couldn’t use the USB-c port so it’s on a USB 3.2. gen 1 port now with the included adapter.

For some reason the Reverb G2 doesn’t like a undervolted RTX 3090 : I need to find out what that’s about.
(When FS 2020 is running and you switch to VR the desktop reboots when I’m using the undervolt V/T curve in Afterburner)

DCS looks great with the G2

X-Plane 11 is still a work in progress.

I tried the captain’s guide, but it ain’t working for me : I’m trying to at least get 45 FPS (halve the refresh rate of the G2)
About the blurry cockpit : for me it doesn’t look like the latest OpenXr runtime is causing the blurriness but the resolution of the G2 in FS 2020

no problems with a light under volt on my 3090 and the G2, it’s likely your under volt is just a bit too aggressive for your card but it only shows when under the sort of loads the G2 creates.

Consistent 45fps will be a struggle to put it mildly… we can perhaps hope for some improvements to the sim in the next sim update, but we’ll have to wait and see. There’s also definitely room for improvement in both the wmr environment and the nvidia drivers for VR.

Lowering the resolution to panel resolution results in significant undersampling after barrel distortion and subsequent enlargement of the buffer image, which is a topic well covered here and elsewhere. That is why it results in things becoming blurry. Forget any notions of native render resolutions in VR as they just simply don’t really apply in the same way as you may be used to for flatscreens - For “ideal” image quality the G2 requires 1.4-1.5x scaling (which is the default 3164x3092) but of course performance may necessitate a reduction as a compromise.

Resolution is still the most GPU/CPU heavy setting in FS 2020 correct ?

Just for the avoidance of doubt 1.4x factor is already built in to the 100% figure in steam and OXR SS settings so you just need to set 100% (in game and on the OXR slider) to achieve that. Above 1.5x panel res you are super sampling even in the most stretched part of the frame but may still see benefits to aliasing and thus perceived image quality but obviously MSFS is a pig to run as it is so it isn’t really viable here. Some other less demanding games can easily run at over 100% on a g2 though.

I’ve bin tinkering with FS2020 settings, OpenXr settings and Nvidia settings for a couple of days now : I give up.

OpenXr at 60% with motion repojection on gives me close to 45 fps, but a lot of instruments in the cockpit are hardly readable.
When putting OpenXr from 80% or up the grafhics become very crisp and clear, but I’m getting 25 fps if I’m lucky.
The captain’s guide says 30 fps is enought for FS2020, sorry not for me, I’m getting headaches within a couple of minutes from the stuttering.

If anyone has any suggestions : please tell me.

I’ve anyone has a rtx 3090 coupled with a G2 : could you please pass your settings so I could give them a shot.

If anyone has any suggestions : please tell me.

Would you consider using an Index instead of a G2 a valid suggestion?

I have literally a blast with the Index and WU3, so much I can push more pixels per frame than I can with the G2 and with motion smoothing! My Index settings for the last 2 weeks have been:

Very good experience with these all over UK but London aboard the Citation for example pushing 2244 x 2492 per view and per frame!

PS: I’ve finally received my Frankenmask and I’ve been doing a few tests yesterday. I’ll need more time to compile and publish my findings but to stay on the topic of performance, I needed to lower resolution down to about 1.5k x 1.5K to start being able to fly with motion smoothing. This is a massive reduction in resolution making the G2 higher panel res a moot point with all the other things which are less good than the Index.

Maybe if I had a 3090 and FS2020 would be better optimized, the G2 would take a more prevalent place in my VR experience but right now I find it really not up to the game.

I’m not even able to get a stable 45 fps with medium settings and a lower resolution so there’s something wrong on my end.
So I’m starting from scratch again.

Thanks for your settings

[edit]
Removed Nvidia driver with DDU, restarted and reinstalled 457.30 , put in the settings from the guide ( except the one for low latency because there’s no low latency option ?) ,
Same settings on OpenXr as prescribed by the guide (100% OpenXr, 70% FS2020)

The CPU is likely bottlenecking your attempts to hit a reliable 45fps… you may find some improvements from specifically lowering CPU intensive options but in my experience a locked 30fps is the only truly reliable experience in this sim across all aircraft/environments etc currently and I agree - it certainly won’t be for everyone.

We sit and wait for improvements to the sim itself, the VR implementation and for Nvidia to fix their drivers properly for VR.

Yes…if you can find an Index!

It does indeed look the CPu’s the bottleneck. (doing between 18 en 25 m/s on CPU)

Which settings in FS2020 are the most CPU bound ?