Unfortunately, with the WU6, the global night lighting was also destroyed …
Well done folks, doesn’t anyone test what’s going to be published beforehand?

I also posted a video:

WOW is this real?? how can Asobo don’t notice these bugs??

Of course they don’t

I was going to create a chain on this subject but I will just contribute to this one instead.

I usually only comment here when I am bemused, angry or some other negative state over something Asobo has done. This gives you the impression that I have nothing good to say about MSFS at all, but that is not the case. I want to make it clear than I am happy with the little I have so far seen from the latest patch. The scenery in the World Update’s affected area looks great and I can’t wait to explore.

Congratulations Asobo, (so far, I may see things later that change my mind) for fixing up the sim in many of the ways it really did need fixing up in.

But what on Earth is going on with the lighting?

At first I thought whole cities were floating in the same way parts of airport have been floating recently in the sim, which caused the lights of the cities to float with them. Then I realised the cities are not floating, and I don’t think the lights are either, I think the reflections of the lights are bouncing off the windows in the plane. Now, to some extent I have no doubt that the same thing happens in real life, but this effect seems supremely obnoxious. You ca be looking directly at a patch of city with lights on, and be getting lights in the windscreen dancing all over the place in front of you, as if the lights are behind you and bouncing of the screen ahead. The lights (not reflected) also appear to be HEAVILY reduced, I was wondering if the reflected lights are actually what the real city lights should be,when you get lower in altitude the lights kinda come back, so who knows.

This is clearly not right, the effect is FAR too aggressive and obnoxious, and I cannot find any way at all to turn the effect off.

I thought maybe the Raymarched lights option that has now appeared may affect the effect, I tried turning it all off, no change. Tried all sorts of combinations of other options, no difference.

Asobo, for the love of all that’s holy PLEASE give me the option to turn this awful effect off. It’s not just annoying and obnoxious, it is actually so strong that it interferes with my vision and perception, making night and dawn/dusk approaches far more difficult.

Also my TBM keeps having the engines cut, I am hoping with everything crossed that this is something to do with the TBM improvement mod I have installed, and we are not going back to the days of engines randomly and persistenly turning themselves off.

I have to echo the question of the guy above: Does Asobo actually test this game beyond starting a flight from the runway, doing a single lap of the airport during the day rather than in all sorts of lighting and weather conditions, before landing again? Are closed Beta periods before full release of patches not allowed at your company or something? Please consider proper, full optional testing periods before subjecting the public to this issues that consistently appear every single time a major update is released.

It’s not just a reflection, as if you look outside the “box”, there’s no lights at all (see the right hand side) 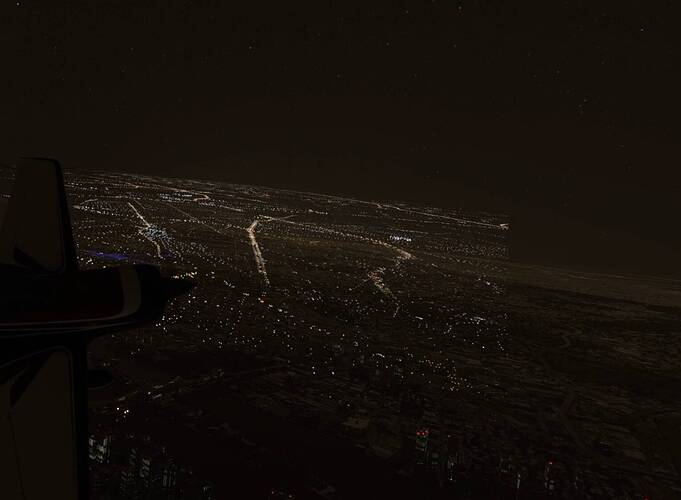 Darn, you beat me to it. At first I thought it was a new reflection feature but then I noticed that the lights were out and no one home down below.

Don’t worry, should be a partial fix in about a month and a half

I have refrained from diving into the back and forth about ASOBO this and not ASOBO that but really ASOBO. As someone already mentioned, how in the #@! does something like this NOT get caught.

With that said the pre-cache has eliminated the pop-in on my system at least and the overall performance seems quite a bit smoother.

Half-empty, Half-full? Look at it side-ways and it all balances out lol.

they never tested to fly in the night, outside the plane : D

and all happy people will

Asobo on that …because the delay wil “improve “ the sim

Happened 6 times … will happen the 7th time also and the sim is getting worse.

With all the stupid mistakes and how they handle “fixes” that break stuff, i wonder

HOW DID ASOBO CREATE THE RELEASE BUILD ( perhaps the best version ) ?? Did they develop that themselves at all ?

Thank you for the report - escalating this right now.

Hard to understand how this could be missed. There is not a lot of testing needed to find that bug. They really have a severe quality issue!

Completely broken on Xbox as well.

This is a hotfix tier problem right? There’s no way they’ll leave this for a month

No this will not be left for a month. More something like 2 - 3 month

Thank you. Please smack their bottoms, there is zero excuse for something as elementary as this.

Move to bugs if needed, I wasn’t sure what category to put it under.

I am not even sure what’s happening here - see video. It’s like there’s a whole other layer

Might help to explain what you are talking about. I can’t see too much but then I am watching on my laptop in a bright room.