For what it’s worth, I’ve seen a bunch of CTDs lately and not often before.
Last attempted flight I had 3 crashes in 4 attempts of the same flight, changing the aircraft for the last 2 attempts to try and isolate.
These crashes occurred within minutes of starting flight.
I typically fly a few hours per week in sessions averaging 30mins.

Same here, tried a flight 3-4 times until I gave up. Kept getting a CTD after about 5 minutes at the gate. Loads of stutter too. I’m on Xbox, I’ve been considering getting a PC because of how useless the sim is on Xbox. But it’s pretty clear PC users are also experiencing the same issues. I wonder, did something just break in the game? Especially after the last update? Or is there just something fundamentally wrong with the servers?

Yeah CTD’s are back again after some time of stability, at this point I have tried every single fix and adjustments in the walkthrough and whatever the kind folks have replied with on this thread. But keep upvoting this thread guys and gals so we can have the developers notice, better yet copy/paste the log from eventfndr to pinpoint the possible issue(s).

same.
game is crashing after maybe 1 minute.
no way i can play with it.
so bad…

I am getting CTD every day now, I even did a clean install and my community folder is completely empty. and am still getting CTD. Something is going. when I click the MSFS2020 Icon to start the game, it takes a very long time to start the game, and when I hit fly it starts to load and crashes. Am wondering if it has something to do with NVidia new drivers.

who marked this as solution? This solution is ■■■■■■■■ and of course did not work. The problem lies somewhere else.

It lies in Asobo. That’s where it lies.

I’ve just tried this both the CMD repair profiles and reinstall of windows 10, still crashed - nothing is working.

@crazyfrogface haha that’s for sure. I think the only way for me is to wait for the patch that will come soon, maybe it will resolve something…

Then you have a system and/or a hardware configuration issue.

In my case, I’ve been hit with the Coherent draw bug. Brand new high-end gaming desktop (less than 2 months old) with no other game than FS 2020 and FS will CTD pretty much on queue lately, so can’t say it’s hardware.

Also, this issue is known within Dev support.

guys, this is hilarious!!! Listen to that!

I uninstalled latest nvidia drivers and installed some random old ones (472.12-desktop-win10-win11-64bit-international-whql.exe). Restarted the computer and launched the game. Then MSFS2020 popup appeared that my game did not run properly, and if I want to run it in safe mode (i never seen such popup before).

I picked Safe mode and it seemed fine, normal graphics, the same I had. And I was so happy that I played for an hour now without any CTD.

I used several planes, demanding cities, 60 FPS with no issue, card to the max.

SO i thought, okay maybe the drivers helped, so I closed the game and opened again to be in Normal Mode and guess what!!! After 5 minutes I had CTD

So now I am looking for a way to get this popup again to run the game in safe mode!

I had 2 CTDs after the (long) loading screen. I thought it was because the nvidia drivers that, for the first time I changed to w11, but after reading the message above I dont know.
I have nothing in my community folder…
And if anything bought in market be the cause of those CTD, is there any way to MS investigate it?

The safe mode will remove all from the community folder.

Fired up the ol Sim today, and right as it got done starting up I get

Fired it up again, and it was fine for a 2 hr flight.

I know, but I have community empty

Getting CTDs also, I think nowadays for MSFS it’s normal to have CTDs XD - PArt of PC life and gamers life as a flight simmer.

Flying the twin otter and it pooped itself at the gate and CTD!
Imaged from the event. 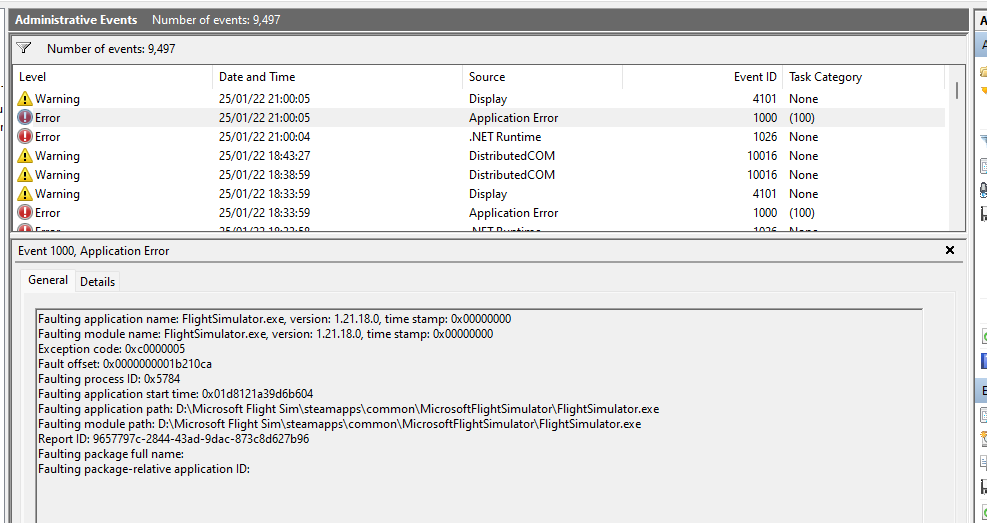