Yes hot temps can be a problem. I recently built a new system and the original case I got was too small and things use to get hot. I updated to a Corsair 4000x with six fan and temp are now kept in check.

I’m not running the sim now and the temp due rise, but all within limits. right now it’s so cool that even the fans on the 3080ti are off.

Going to bed now, but tomorrow I will post a photo of temps when the sim has been running for a while. That about the only time thing get a little hotter. 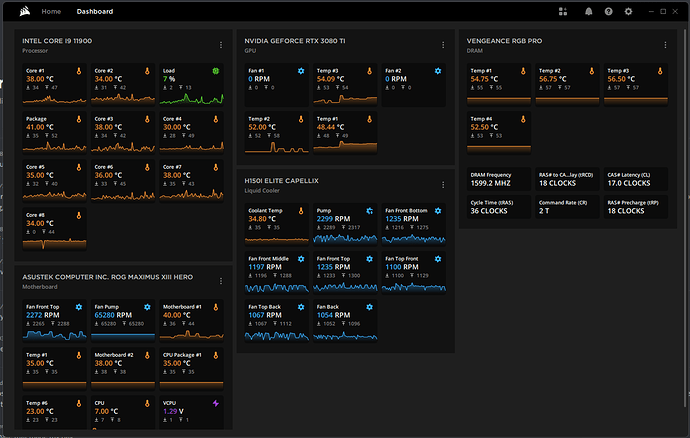 These are my temperatures while flying. Flying from KVRB to KJFK in the BAE 146. Currently passing FL280 for FL320. Flying over water, so not too big of a load. 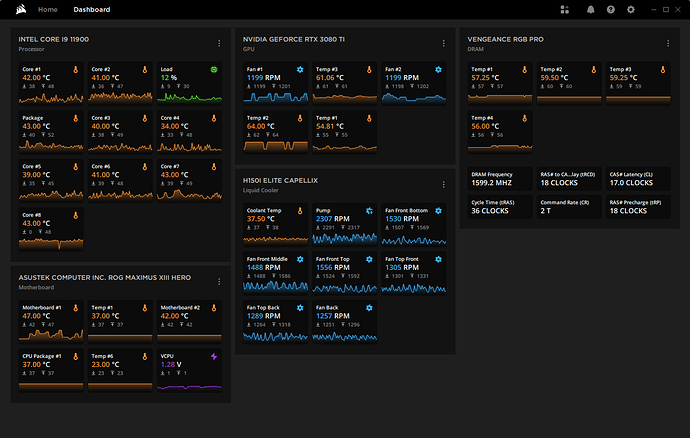 I lost the hope that users read the topic content… I assume YOU not run into these issue most likely caused from OP system itself.

as soon as it is finished loading and you see the main screen, after 2-3 seconds CTD.

I assume YOU not run into these issue most likely caused from OP system itself.

Stop victim blaming. This software is chronically unstable on otherwise 100% stable systems. Flight sim is the problem, not the user or their PC’s.

stop finger pointing to the software in each topic you can find, but which you not fully read and so where you not know whats happen.

The OP itself will not try the hints we gave him… I’am pretty sure that it is not normal that users get a ctd after 2sec in main menu if the users system is stable. I have similar hardware and I not seen a CTD since two years.

If you have kind of helpfull hints as your usually “it is the sim” sentence, please share … otherwise stay in your own topic.

I’am pretty sure that it is not normal that users get a ctd after 2sec in main menu if the users system is stable.

It is for FS2020. That’s the problem! You can’t even tell a software problem from a hardware problem, so the advice you offer is nothing more than a waste of time.

My hints: it’s Flight simulators erroneous handling of one or more of:

None of these are within the users agency to fix, it’s down to Asobo.

If hardware is the issue check out the folks on Xbox: completely standardised closed box hardware, yet multiple crashes and problems cased by Flight Simulator.

your points are not invalid, but just not helping that the OP come into the situation that he can again play ( therefore my comment that posts like “it is the sim” are not helpfull ).

( and would like repeat: In special a ctd after 2-3 second in main menu ).

That there is not a generaly issue, can you see at my system - it just works. But yes, I not use many mods and so I have a lower risc to run into issues caused from mods.
I had no driver issues, no usb issues ( and I also use additional hardware like logitechs radio panel, etc. ) and I have also no memory issues. And therefore I just compare my situation with other users ( in special if the hardware is relativ the same ).

The CTD ́s were caused by outdated/duplicate entries from FBWA320! Solution: First delete all FBWA320 entries, (Msfs2020 installation folder + in the /appdata
(c:user/yourname/AppData/Local/Packages/Microsoft.Flightsimulator"numeric letters"…)
Check in each folder if there is still an FBW entry hidden, also under SimObjects and delete it!
The content.xml file in c:user/yourname/AppData/Local/Packages/Microsoft.Flightsimulator"numeric letters"/LocalCache also delete!
Check InGame via the developer mode where your community folder is and install the FBWA320 there (specify installation path correctly in the FBW installer).
After that, all problems were fixed and I was able to fly without CTD’s without any problems! <3
It took me a lot of sweat to find out.

Exactly this, playing the most demanding game which is stable does not mean your system is stable with everything. Running SC which runs at a terrible frame rate puts a completely different kind of load on the system compared to flight simulator, you can’t compare the two. If FS2020 just happens to instruct some hardware which is on the edge in a way it does not like, it will CTD, just happens SC does not call that specific thing.

However, i’m glad OP has sorted the issue. But don’t be so negative towards testing things just because things “should work”.

FBWA320! Solution
…
After that, all problems were fixed and I was able to fly without CTD’s without any problems! <3
It took me a lot of sweat to find out.

We had already cases where the safe mode is’nt “safe enough”… Now, I put FBW also for such main-menu-ctd on list of possible cause ( and still hope that in far future the capsulation of mods will be harden and let not crash the whole game ).

Glad you finally figured it out. It can be pretty tough to track all of these different issues down but it is sort of rewarding when you do. That was the only point I was trying to make.

Again glad you stuck with it and your tips and findings are helpful to others!