The scenery was great but it was different from what it was in the WT CJ4.

I was just thinking that I have seen the graphics change with this
one GPU from:

But to your statement of GPU memory size.
That has me thinking. I’m planning on buying a GTX 3080 - 10GB.

You need more data to support this theory. No point arguing speculation

Hard to put in words but more detail.

I’ll get 2 screenshots to show or will
admit via reply that I was wrong.

I am accepting your comments due to the way you put them as if
completely knowledgeable of the FS2020 programming by ASOBO.

PG data comes in 3 states, low, medium and high. If you fly too fast for your system to keep up, you’ll end up seeing the medium level or even low level up close.

That is exactly what I saw.

I did a lot of testing after WU3, London is a special case, very dense PG data.

What you can do is set the rolling cache size sufficiently big and ‘mop up’ the area to get it all stored locally on a fast SSD. That still doesn’t guarantee the sim keeping up, but at least the bandwidth variable is gone.

Photogrammetry for London is a lot of data, a lot more than NY. I did some tests to figure out how much data there is London City airport to Heathrow, 500ft altitude, Autopilot, noon, clear skies Slowing down to give the game ample time to keep up (25% sim rate at max terrain with PG data) 8 test flights, identical conditions, checking data usage before and after the flight No PG Data vs PG Data Terrain 200 0.32 GiB 6.2 mbps / 4.38 GiB 85 mbps Terrain 150 0.29 GiB…

It all depends on circumstances. My 100 mbps connection isn’t enough to keep up with the bursts it needs in the middle of London. However it also depends on server load and data congestion. The tests I posted were from Sunday, network usage from FS2020 rarely went over 40 mbps. (Ookla speedtest reported 97 mbps down available) When I tried again on Monday, it mostly got up to 80-90 mbps, yet still with frequent pauses. Very different from the day before. I pinged the 3 different servers it was…

It’s pretty common place with PC games to set your expectations lower than trailers show, depending on your system. FS2020 is a bit of an outlier in that it sort of self destructs when it falls behind. As you see from the screenshots I posted earlier, my system can produce beautiful scenes, if I give it enough time to keep up (about 30 knots moving speed). Scroll up a bit and you see what happens when I fly at 180 knots. It’s a balance between bandwidth, memory, cpu speed vs draw distance, alt…

It’s all relative, I’ve been stress testing the game to find the extremes. Just now I did a flight from Southend to Heathrow at 2,000 ft altitude. Much more reasonable height. 185 knots TAS, the sim had no trouble keeping up, network usage stayed just under 50 mbps over London. [London 2000ft] I’m running on a very modest setup, slow CPU, 16 GB ram, wi-fi, 1060, it’s a laptop. This is on high settings with a couple things turned up to Ultra (trees, texture synthesis, windshield, 8x8 texture …

I did a scan of London this morning, flying low in a grid pattern with 30 GB rolling cache. Which is not enough. This search pattern at 500 ft downloaded 30.26 GiB in total [London Scan] Confirmed use of rolling cache as network activity stopped completely every time I crossed my path then go up again to 80 mbps treading new ground. Enough data to get an accurate guess, it’s between 41 and 44 GiB of data in total. I had to do this at half sim rate reducing my speed to avg 60 knots with netw…

Wow and thanks again.

I wasn’t challenging your knowledge.
But you sure gave back to me.

Thanks again. Now I have some reading to do.

The main point of PG data coming in 3 levels.
Never heard or read that before.

Tbh that’s more an assumption I made based on how the manual cache works. It also make sense with what I observed, big low detail patch appears first, then smaller blocks get more detailed.

This update / refinement process is also what causes runway tears. I made a video of how FS2020 constructs the terrain on my rather slow system Instant jump back to where I left the drone cam behind to see how long it takes, 80 seconds to get the whole scene together. Normally the sim works ahead, teleporting reveals what goes on behind the curtain. And if you fly too fast, you end up in the middle of this process, hence tripping over runway tears on landing.

I have the 2 screenshots and they look similar.
I tried to match the location of the shot.

It is interesting that:
The WTCJ4 takes off and flies toward NYC and flies centered over Central Park.
On the way, flies with LaGuardia Airport on the right wing.

The C172 flies to the right of the WTCJ4 flight path and far right of Central Park.
On the way, the LaGuardia Airport is on the left wing.

Each planes view is different.

I have the 2 screenshots and they look similar.

Maybe not helpful but I am curious about if you have rolling cache on and if you did run it with the 172 first and then the CJ4 does still seem different because I believe that is what its for if it actually works.

The flight from KJFK to KEWR has Waypoint AGNSS which is about half way. This Waypoint is at the Teterboro Airport.

Your best bet here is to use the drone camera and position both shots the same. Also make sure the time of day and weather it the same - for this kind of comparison, clear skies works best. Everything is diffreent about these shots, including the aspect ratio (weird if you did a screenshot). Makes detailed comparison here very difficult.

Take one shot, using key landmarks in the corners of the shot so it is easy to find again. Ideally take the shot without the plane in view - we want to see as much scenery as possible and the plane/HUD just gets in the way

I’ve done what I can though, and not seeing a lot of obvious difference from this zoomed in section:
CJ4: 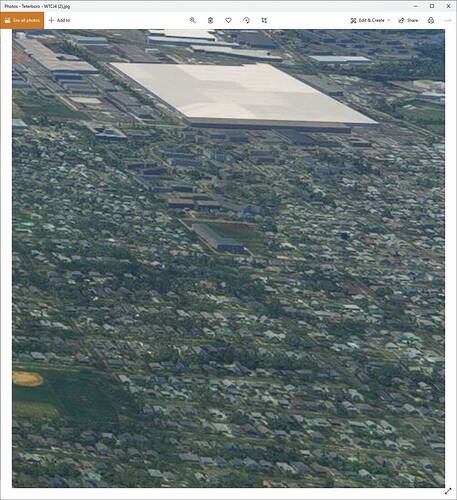 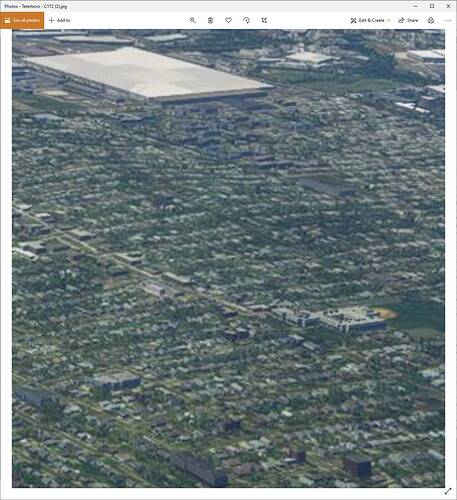 They look similar to me also.
Just used Win 19 Snip & Sketch.
Had to crop the files because they were too large to upload.

wow, that would actually be a very smart feature. AI wise

It seemed that the C172 scenery was more detailed. It was definitely different.

Confused a bit then as your OP was about how different they were, or did I miss something?

Unless you have your detail level cranked low, the differences you might see would be further in the distance. Like a build rendered in better detail in one scenario than another. But that would be driven by your graphics settings, not a change in plane.

I said I agree to your previous reply.
The 2 screenshots look similar to me.

I did see what I thought was different graphics being displayed.
I can’t prove it and can only say that I was wrong.

But, I have to ask if the Cloud is sending a single graphic image,
where is is being modified for different CPU & GPU and FS graphic settings?

OK, understood. I’ve no idea what it is sending, but in your PC it is rendering it differently depending on your settings. If the settings aren’t different, then I’d be surprised if the image is any different if you are flying a diferent plane.

The bandwidth question is interetsing, and you can see the effect really easily yourself if you put on autopilot, then advance the sim rate at maximum speed for a minute or so, then then return to normal speed, you’ll see the scenery gradually spawning in around you. Can take quite a long time actually to “catch up”. It could have been an affect like that, or a server glitch at MS’s end