Yeah allready lot’s of topics about this with many comments. It’s a legit question though. But agree with the above that thus isn’t hard to find with the seqrch function.

People have very different performance and graphics in london.

Watch: The absolute state of London

If you are experiencing performance issues since the UK Update please jump to the linked thread and participate.

Research Question - If you are having problems with UK Update, **What server are you connected to?** General Discussion

As in the title. If you are experiencing CTD, stuttering in the menu, poor graphics or extreme framerate loss, please check to see what server your sim is connected to and post. Where are you, physically? Where are you flying (if you get that far) or where are you trying to load in? What server are you connected to? What is your internet service? The purpose of this question is to determine if there is a pattern to the issues being encountered. It took me less than an hour today during my lu…

You tell him to use the search function and then add that he’s gotta read all the threads as well in case there’s a comment that addresses what he’s looking for?

And come on, be nice dude. It’s Friday! Cheer up will ya.

It literally brings my mediocre rig to its knees. Got a bit more performance by dropping buildings to high.Mine looks decent just a performance hog.

i m not a hardcore "proper " simmer and tend to fly low in light aircraft, im a sightseer, so i just turn off the photogrammetry as it looks like post WW3 close up…
its too much of a hit on my rig anyway… and London has WAY too many POIs so i struggle with london since the update, it was fine before , BTW i fly in VR.

Photogrammetry for London is a lot of data, a lot more than NY.

London City airport to Heathrow, 500ft altitude, Autopilot, noon, clear skies
Slowing down to give the game ample time to keep up (25% sim rate at max terrain with PG data)
8 test flights, identical conditions, checking data usage before and after the flight

Total data usage and converted to average mbps needed for a full speed 7 minute flight (In a Beechcraft Bonanza). The avg is just an avg though The PG area stops a ways before Heathrow. You likely need well over 100 mbps for the dense middle part over London at max terrain detail, regular flying speed.

If I fly slow enough (30 knots, using quarter sim rate) it looks like this 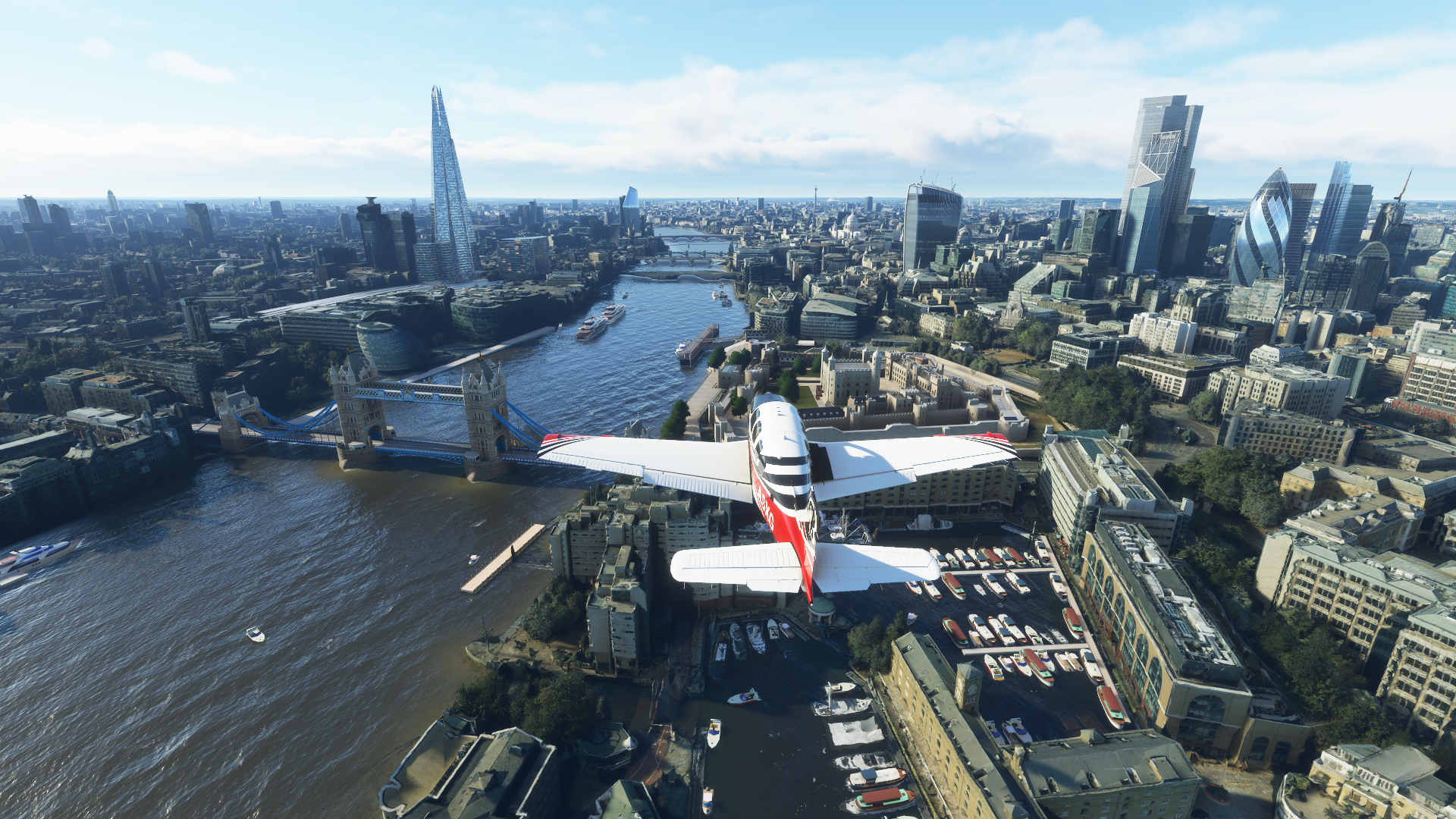 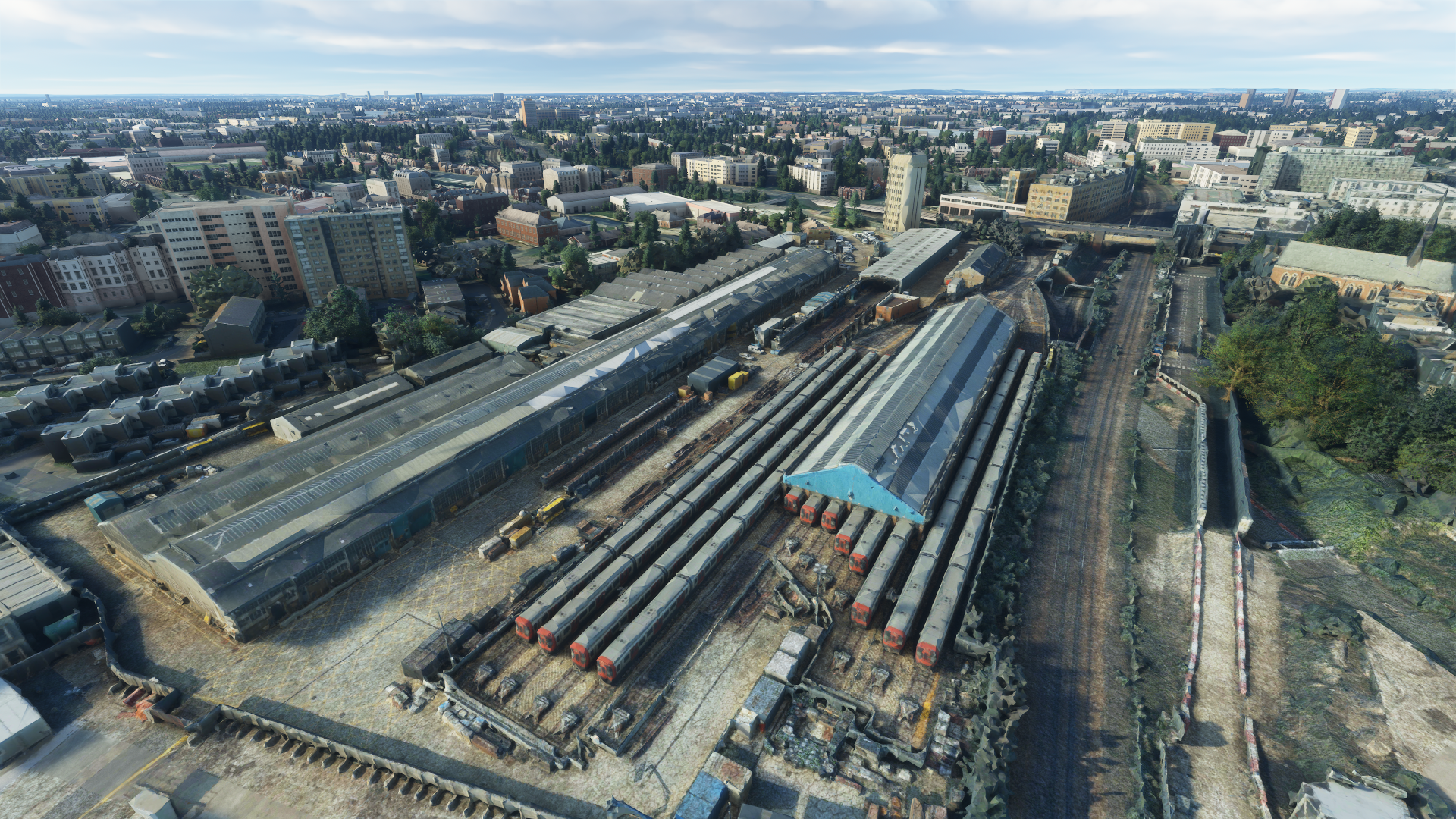 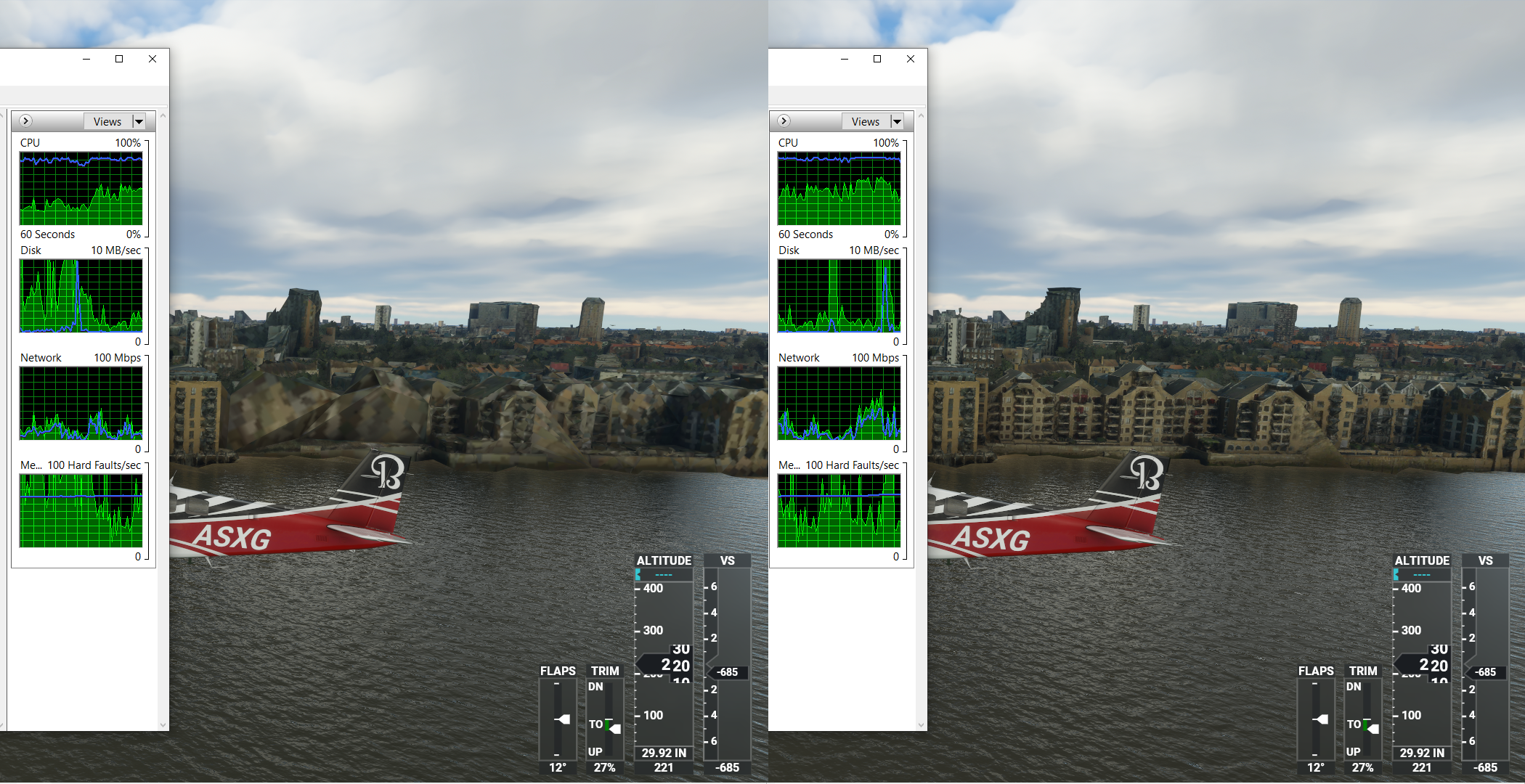 Even though I have 100 mbps down, the server mostly stays under 40 mbps

It needs some cleaning up, is this a large bird for example? 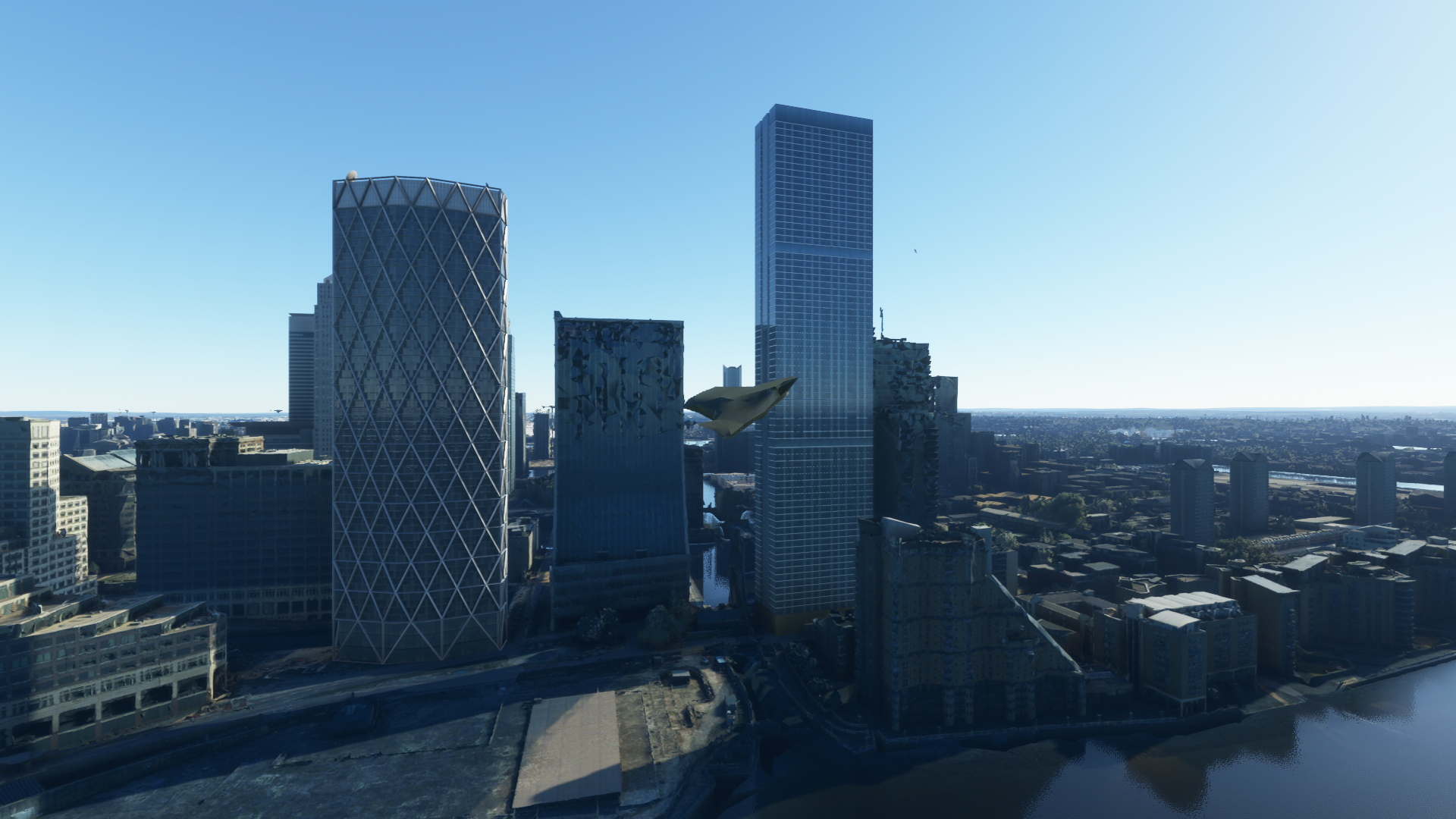 It’s amazing technology and I’m very grateful Asobo lets us sit at the forefront enjoying this new technology inside a game!

Nicely done @SvenZ.
This is the kind of data that helps immensely.
I have been working a hunch that a number of issues that have appeared recently are related to bandwidth. This is very well put together and reinforces that theory.
Thanks again.

Thanks. It’s not just bandwidth though. Bandwidth is the biggest bottleneck, however after I had gotten all that data in the rolling cache (those tests were done without any cache) I still quickly flew into ‘blob’ land.

I confirmed it was not downloading any more data, and my SSD wasn’t stressed either. The game had no trouble getting the data, but it still needs to process that vast amount of data before the GPU gets its hands on it. And when this sim starts falling behind, it goes into a downward spiral.

Anyway, from cache I can maybe fly at half speed instead of 25% speed without the game falling behind. Full speed, 1080p render resolution, terrain 100, still can’t keep up and the scenery degrades. CPU and RAM are the bottlenecks after bandwidth.

It’s pretty crazy that you need to be able to stream data about 3x faster than 4k60 gaming on Google Stadia to fly at 170 knots over London.

To me answers a lot of questions about why the update is get a lot of adverse comments, including plenty from me.

We just do not have those internet speed here in the UK.

Mine has a minimum of 50 mbps and that is the top of options with BT, as I cannot get faster.

None of the actual requirements for a fast internet is anywhere readily accessible on the purchase page of the MSFS website.

I tried Virgin Media, was not impressed, they could not find the cable so all I got from them was a “to bad, bye”.

It all depends on circumstances. My 100 mbps connection isn’t enough to keep up with the bursts it needs in the middle of London.

However it also depends on server load and data congestion. The tests I posted were from Sunday, network usage from FS2020 rarely went over 40 mbps. (Ookla speedtest reported 97 mbps down available) When I tried again on Monday, it mostly got up to 80-90 mbps, yet still with frequent pauses. Very different from the day before.

I pinged the 3 different servers it was grabbing data from during the flight and the ping times were all under 20ms. Just a few ms more than ping times to my nearest speed test server (13ms)

Today’s test, fill the rolling cache with London City to Heathrow, to find where the next bottleneck is.

First, filling the cache on an early (here) Tuesday morning, the server is sending data much much faster than on Sunday afternoon. Still too slow to keep up though, 100mbps is not enough. London data could use a lot of refinement, for example this is fully resolved 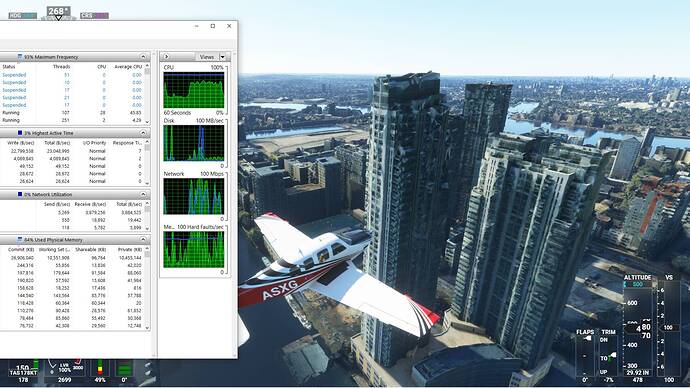 Some snapshots along the way, network use is mostly maxed between the pauses

After getting it all in the rolling cache, trying a full speed flight (stress test at max terrain) 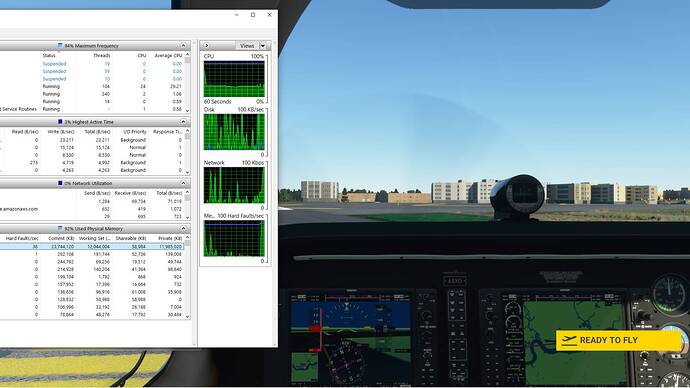 It quickly turned into a mess, 16GB physical ram is my biggest bottleneck 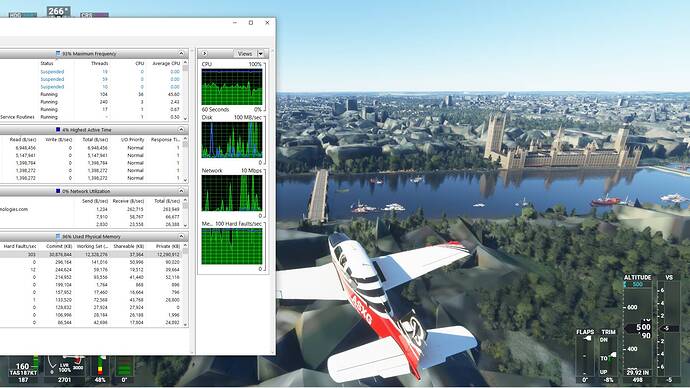 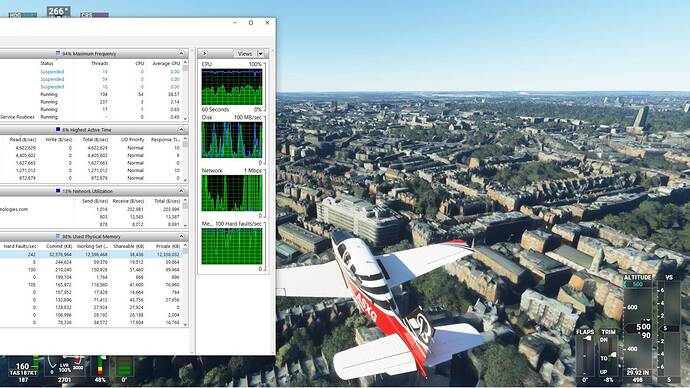 And then the sim completely falls behind 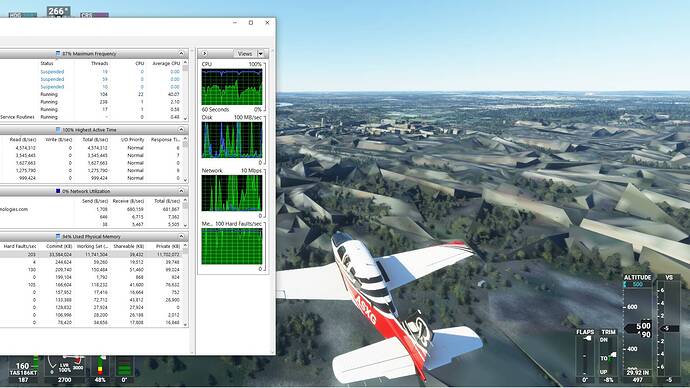 After leaving the PG area it can’t catch back up 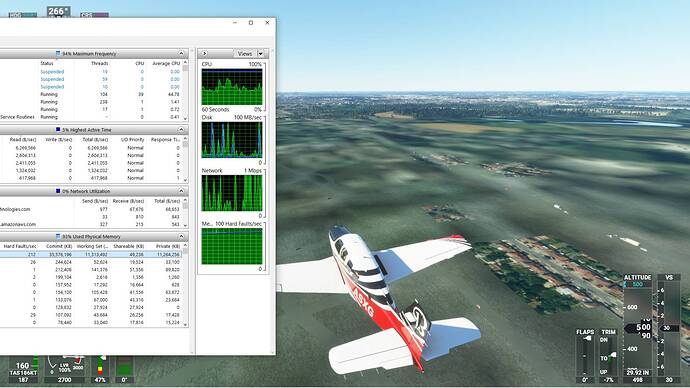 And finally gives up the ghost over Heathrow over 40GB allocated 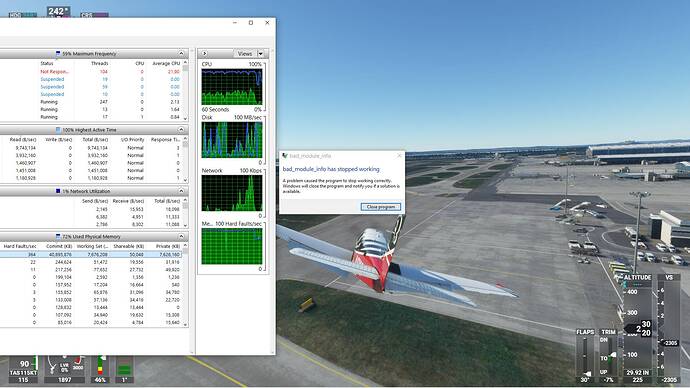 Now if my ram upgrade would finally ship I could see how much the difference to 32GB faster ram makes.

3 Likes
Different Graphics MAYBE arebeing sent from the Cloud depending on your flight type and configuration
willisxdc February 24, 2021, 2:53pm #21 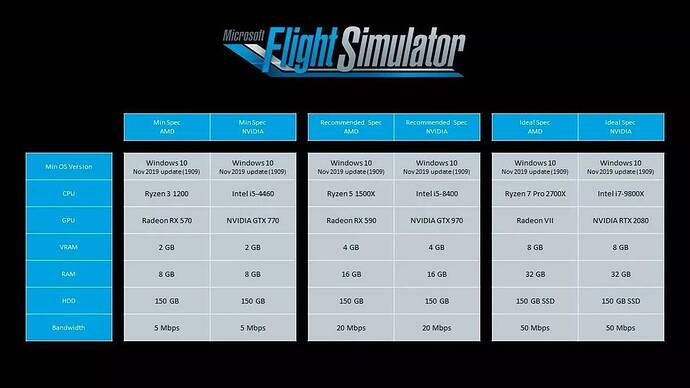 It’s the minimum requirements (to run the sim at all).
So that’s with all settings on low, 1080p, and likely photogrammetry disabled.

I would sooner say that the ‘Ideal’ and ‘recommended’ specs are way too low.

MSFS should come with a warning.

I think one of things that is often forgotten is that when streaming cloud data it begins with YOUR system requesting data and sending telemetry to the server so it knows what data to send you. You may have a 100mps internet connection but that is the ISP’s “ideal” download speed. I have seen plenty of ISP’s that advertise 100mbs when in fact it’s 100 down and 5 up. Upload speeds can be brutally slow and will have a significant effect on a two way conversation. If you were to ask me a question while sitting next to me at the bar, you would expect an answer pretty quick. If you wrote that same question on a napkin and mailed it to me, I am pretty sure our beer budget would be used up before I answered you.
Only a good quality speed test will reveal your ACTUAL connection. Not uncommon to see 65-70% of ideal download and upload speeds that require a stamp.

It’s pretty common place with PC games to set your expectations lower than trailers show, depending on your system. FS2020 is a bit of an outlier in that it sort of self destructs when it falls behind.

As you see from the screenshots I posted earlier, my system can produce beautiful scenes, if I give it enough time to keep up (about 30 knots moving speed). Scroll up a bit and you see what happens when I fly at 180 knots.

It’s a balance between bandwidth, memory, cpu speed vs draw distance, altitude and movement speed. The GPU is the last piece of the puzzle and really only matters for resolution and fps.

Now what I don’t envy Asobo for is the task to get this running on a Series X. Of course people are going to try to fly low and fast over the Thames, expecting 60 fps and visuals as seen in all the trailers. I hope it doesn’t turn into a CP2077 train wreck. Yet the tendency to self destruct when resources run low needs to be solved somehow. Series X has 13.5 GB available for games, Series S only 9 GB at most. At least the CPU speed is good at 3.6 and 3.8 Ghz. My system’s 16GB is definitely not enough to fly over London at regular speed. 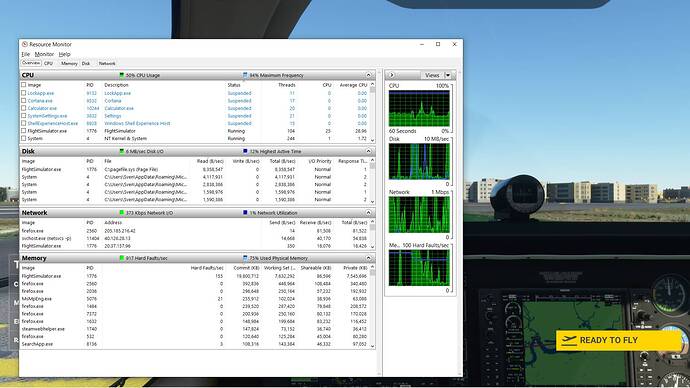 My CPU and RAM cannot keep up at 187 knots 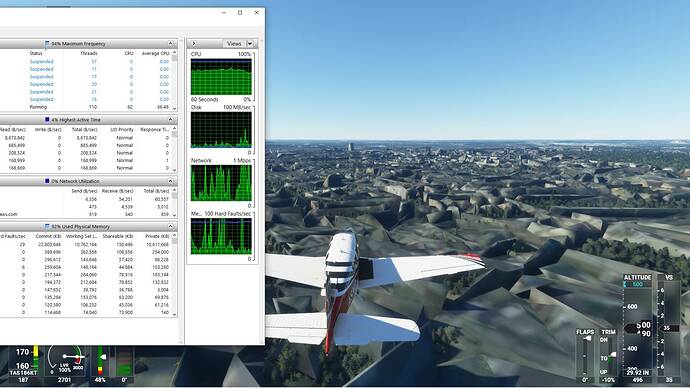 But after leaving the PG area it manages to recover 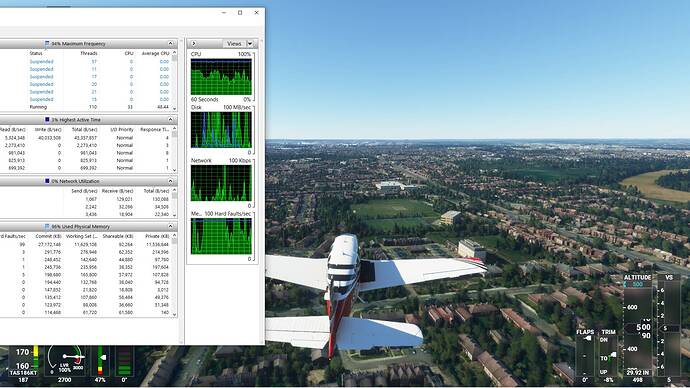 But the sim survived (still crashed, forgot the landing gear 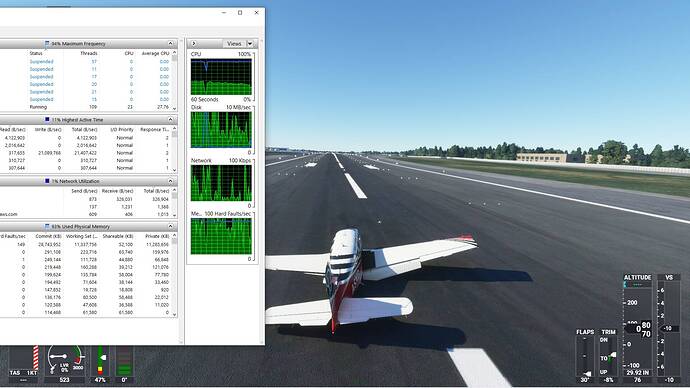 Restarting the sim from desktop, trying terrain detail level at 50 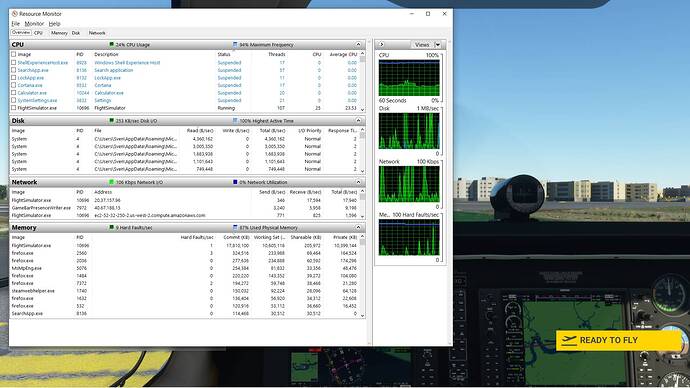 Fine outside the PG area, memory allocation dropped a bit to 20.1GB 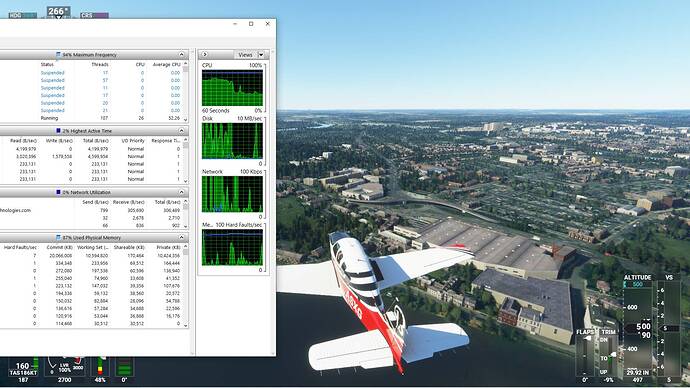 And another belly landing (I get it now, I’m sending the ‘g’ to the resource monitor, not the sim haha) 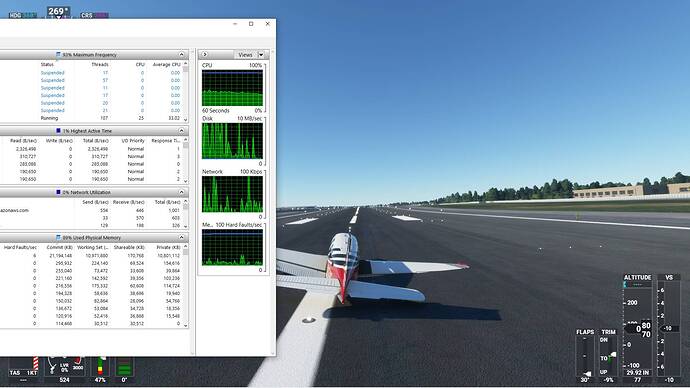 Can London even fit in 16GB, terrain and object detail at 50, high settings for the rest: 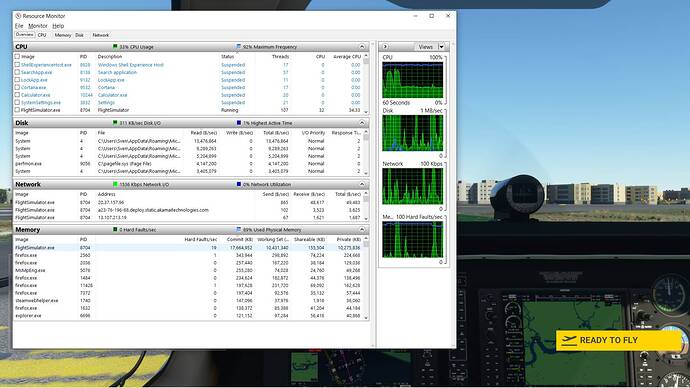 It runs buttery smooth, mostly, still hitches when the pagefile gets hit 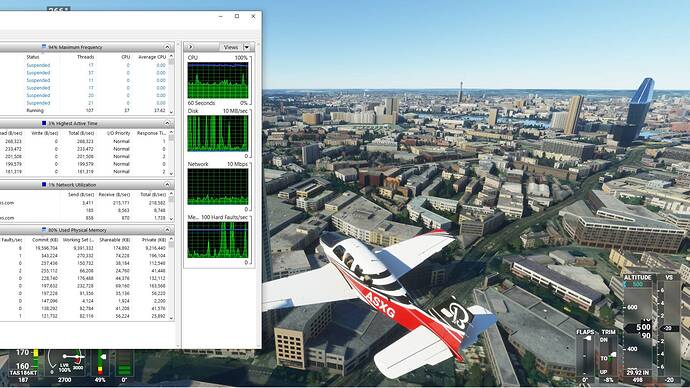 Successful landing, heathrow drove memory use up to 20.7 GB 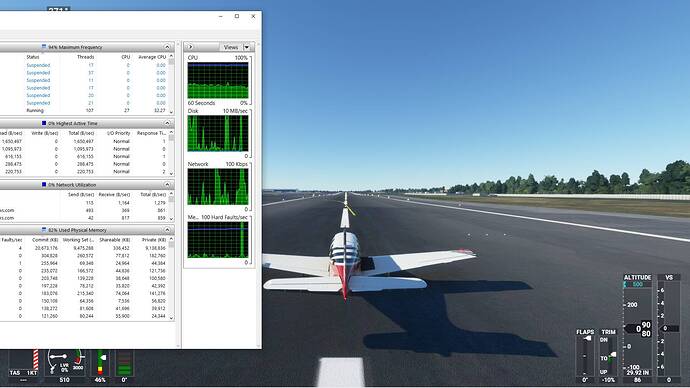 Btw back to my regular settings (terrain 200, object 150) without PG data starts at 22.6 GB, goes up to 25 GB allocated over London and spikes to 29 GB allocated while landing at Heathrow. Runs pretty smooth though (minor pagefile stutters) and has no problem keeping up with the AI generated scenery.

Different Graphics MAYBE arebeing sent from the Cloud depending on your flight type and configuration
SvenZ February 24, 2021, 6:19pm #26

All you need to do is ping the server to find out if your lower upload speed matters.

FS2020 is, “Can I have 40 encyclopedias for these areas”. The question is only a couple bytes, the answer is a truck load of data. Lower upload speed has no effect.

You’re probably connected to different servers but you can see in the resource monitor what servers are used. Simply type ping with the server name in a cmd prompt and you have your answer.

this is pathetic google earth loads faster and looks better