I’m a little worried about this month’s dev q&a, they may have run out of topics in 10 minutes.

If all of what you say above is true, then why are there still major bugs (eg 787 drag and steering, 747 steering, Autopilot issues, grainy clouds, live weather being temperamental, CTD’s, etc.). I’m not saying everything should be solved overnight, but it doesn’t seem like things are being done in parallel. Why are you being so defensive, I’m just commenting what my honest experience/feeling is?

Why are you being so defensive, I’m just commenting what my honest experience/feeling is?

So why they abandoned the promised hotfix for the terrain spikes and keep us waiting for fixing this with World Update 3, postponed twice already?

I don’t understand either. This has literally been fixed by a community mod and now in this dev update this problem says ‘ongoing improvements’ . Does that mean they are only able to fix it partially themselves?? The fix is not complicated and described by the mod maker on this forum.

Definitely, it just came across in a weird way - all good

Wow Multi-Monitor support 2021-2022 really? That sucks for those of us with multiple monitors I guess… ugh

Hopefully they got the terrain spikes fixed this time around…

Fully agree, I also start to perceive it as a provocation having to read again and again on the roadmap that this Top 12 voted issue is not even processed but just ignored.
Actually it should be a question of honour for the flightsim that wants to lead the market to eliminate such a ridiculous bug asap. In 30 years I’ve not seen another sim that messed up liveries this way.

This sim is great in many dimensions and I have all respect and recognition to the team for delivering this, but this topic I just don’t get. With releasing the aviators liveries they obviously touched the topic and had the chance to fix it, but instead just worked around it.
Very disappointing…

So why they abandoned the promised hotfix for the terrain spikes and keep us waiting for fixing this with World Update 3, postponed twice already?

But seriously, it is an annoyance that I don’t think requires a patch all of it’s own as they already have in place what they plan to put in World Update 3. As for why it was delayed before, I guess it just wasn’t ready at that time.

We’ve seen the results of the former a few times already, and slowing down the frequency of updates will hopefully make for more stable ones, and give them time to perform more thorough testing.

Wasn’t this mentioned in the interview with Jorg that @Abriael posted? I think Jorg explained they were doing some work on this, something about decoupling the textures from the model, so the model itself doesn’t need to be altered.

At this point, I don’t care if there are ANY building improvements. There is only ONE improvement I have to have - GET RID OF THE SPIKES!!! 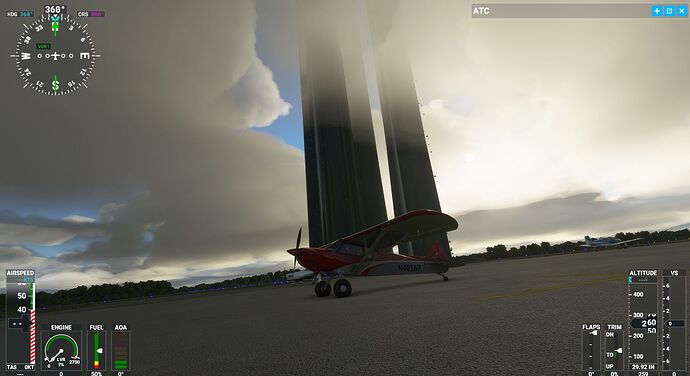 You make some good points. But saying that the spikes are just a “minor cosmetic issue . . . doesn’t stop you from flying” is only true for YOU. I have grounded my airplane since the introduction of these enormous graphical freaks. If you want to see what I’m talking about, fly into KRMG and see what many of us have had to put up with. Flight simulation at it’s BEST is about suspension of disbelief . . . and then you try to make the approach to KRMG and your suspended disbelief comes crashing down around you.

I agree with you about putting out less frequent and HIGHER QUALITY updates. But these spike have to GO.

But these spike have to GO.

And they will, according to the last Q&A we had, so I hope they are right.

I’ll have to try KRMG. All of the spikes I have seen so far have disappeared when I am closer, and have not remained, with one exception. South of London there is a massive building, with an even larger outcropping of land going up thousands of feet. It’s different to the other spikes I have seen where they are observed in the distance only. I flew alongside this one, and posted some shots of it on this forum. It did not disappear.

I just had a look at your photo, and yes that is similar to what I saw south of London, but it was much thinner than that. When I first saw it in the distance, I assumed it was some antenna that I had not seen before, until I got closer. That’s awful!!

Will Corsica Island be inclused and covered in World update 4 France/Benelux ?

This product is not a charity, it must generate revenue. I believe the idea of World Updates is aiming at generating sales in the impacted regions.

It is quite possible, I admit I never thought of these World Updates as being a sales enabler. I was rather believing World Updates are the means they are using to keep your attention and to keep you engaging with the game over time, like the free maps in Battlefield or the free perks in other games. These are very effective because when they do release those, you most likely want to fly again, or more, exploring the new regions and airports. In any case one doesn’t preclude the other!

The stuff not fixed is either fixed and in the upcoming sim updates or its hard to fix. Things like the pixilated clouds fix is likely to introduce a performance impact with clouds.

With so many planes and so many fixes that could be done for them I am not surprised they are not done yet. Making world updates and airports is much quicker to do so expect plenty of them and we just have to be patient for the rest.

Where have you been all this time? People are finding ways to push the sim to mach 2 with the modern flight model.

Things like the pixilated clouds fix is likely to introduce a performance impact with clouds.

So was a performance improvement before?

The only thing I changed were two settings in a local configuration file to disabled sharpening, and one other.

For some reason Asobo decided to force the post processing effects on by default and no way to turn each effect off in the games graphics settings. So you have to do this yourself. NOTE: These post processing effects are purely personal preference and you can disable or enable them as you wish. Navigate to this directory, I installed the game on a different drive but the user configs defaulted to this place for me. C:\Users\yourname\AppData\Local\Packages\Microsoft.FlightSimulator_8wekyb3d8…

There are two sections, the bottom one being for VR. I made the changes in the top sections, and haven’t noticed any performance issues because of it.

“While the F-15 is capable of reaching Mach 2.5 (roughly 2,000 mph), developers of the add-on say that Microsoft Flight Simulator currently has a barrier in place to prevent that. Polygon has reached out to Asobo Studio to learn more about that.”

Are they actually making the planes fly supersonic or just tweak the gauges to display higher airspeeds. And how?

I can’t say technically, but it sure looks like it is a LOT faster flying between buildings that I can get my other jets