I did not, I have steady 30fps as I have set in the Nvidia settings. Extremely smooth flying. And my GPU and CPU are not even melting when I’m at all ultra.

That is some great advise to shorten the landing distance 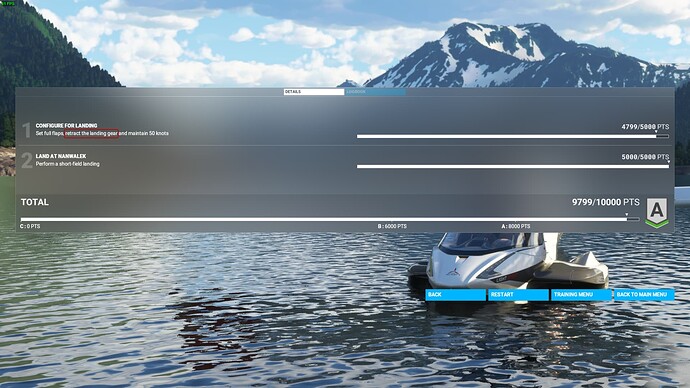 To be clear, this is not the water landing tutorial

Yes, I’ve experienced it for myself now. In VR, the mouse ‘freezes’ any time I move it over a pop-up window. So I can interact with the window at all and I struggle to get the pointer to reappear to regain control!

I also found the mouse to go very laggy (movement stopping and starting every second or so) after trying to interact with some windows. After dropping out of VR and back in, it was OK again.

Not happy with the update for these reasons:

Basically, both 2D and VR are broken; it’s a case of picking whichever one you can bear to put up with the broken parts of the most.

New content seems good at a glance; had a quick flight over central Nottingham which appears to be a very small photogrammetry area compared to other cities, but it wasn’t very enjoyable due to all the issues above. Same for the F/A-18 landing challenge as I struggled to look around.

I think the need to hit release dates (Xbox release for SU5 + GotY/Reno for SU7) is really having a negative impact on all. SU6 was great. This one is not.

I feel it needs a hotfix or two - this is no state to leave the sim in until January.

On water though? Should the landing gear be extended or retracted?

To make things worse regarding the new live weather system:

I seriously hope this gets fixed sooner than SU8 in February.

It’s a mess as always. Incredibly disappointing and frustrating.

Jup, only this is not the water landing tutorial

Stuck on decompressing mostly since the update came out. I’m only at ~86% completed. Download speeds are fine, but the decompression takes forever. I don’t remember it taking this long. Sucks I have to go back to work tomorrow

It looks like the old “Live weather loads clear skies on second flight” bug is back - can anyone confirm that?

It seems as if live weather was completely down. I was able to load live weather about 2-3 hours ago, but not anymore. The old trick load clear skies and then switch to live weather isn’t working either.

Yes, here too, if that were the only mistake. For me personally one of the worst updates since the release. Above all it should be GOTY, in my opinion it is not worthy of that.

I seriously doubt the competence of Asobo and MS with regard to quality control. After practically every update, something breaks that worked well before. But the main thing is that GOTY is out, and everything shines and sparkles. YAY !!!

I already know how long it will take to fix all the new problems, it makes me sad

We’re investigating reports of Live Weather being offline. We’ll post an update when we have more information.

ah maybe it’s just live weather breaking altogether then., I just checked, it loaded the clouds in EDDH and KORS once, now after a restart it doesn’t load clouds at either place anymore.

Update stopped after 90% and return to desktop
Since then inable to launch the sim
I think I have no other option but re-installing the whole game
Very disappointed, never had a problem with an update before and very, very few CTD since Aug 20.