From my end, all I can see is failure. My favourite aircraft has been ruined by glitchy textures (you can now see through the engine cowling in the Beech Baron, realism gone), and the new highly hailed weather system doesn’t work, in-sim weather does not match METAR as was promised, and now horrible abrupt weather transitions have been introduced, so one can be flying along in clear skies and then bang, fog everywhere, again, totally unrealistic and immersion killing. Some people reporting tree draw distance has been lowered yet again. You can’t move the world map without having to reset your mouse profile and lose all your bindings, still can’t adjust the time properly on the world map, and more, there are tonnes of bugs they still haven’t fixed. Every single update has made this sim worse. Instead of focussing on fixing the sim and actually improve it, we just get a bunch of toy airplanes for silly races.

Yah. My FPS dropped a lot as well. Had to turn down all my settings for the first time ever.

Dang, I’m trying the spotlight event, horrible load times for the landing challenge. And now I’m switched to offline mode, blaming my bandwidth. Too much for the servers as usual.

Same here bevor the GOTY i get 50-60 FPS, and now 30-40.
Reverse thrust is also broken … one of the most important things for me as I fly a lot with the MilViz PC-6.
I have to change the settings in the support options manually every time after every flight, because the Sim always sets it to Easy and does not save it.
Restarting the Sim does not reliably solve the problem for me. There are many more mistakes that I don’t want to list, it’s depressing.

Yep, so so depressing.

Ugh stop resetting my settings. After doing the spotlight event everything is back on EASY and the mouse doesn’t work again in the world map. Frustrating.

Probably, however what about their hardware specifications? Or their visual settings, the type of aircraft that they’re flying, the weather, the airport, use of online services, photogrammetry? There’s a ridiculous number of variables at play, please help the community instead of making assumptions.

Well, the controller support is out. It was my post that god 500+ votes and made it to #1 VR request, so I was really waiting for this. And it’s not a good job, unfortunately. The sim is completely grounded in VR after the SU7 update. Unplayable. And the controller support is very rudimentary and worse than older sims, and has introduced the bugs that killed the VR experience entirely. As updating is not optional, for most if not all VR users Asobo just killed the sim, period. Such bugs need to be figured out by QA and fixed before releasing a mandated update and killing the sim. It took me all of 15 minutes to see them all. What is their QA doing? Is there any QA for VR at all?

These are my observations from the first short session with SU7:

I wonder what kind of QA can let it all through at this state? Beside the FPS decrease, the VR controllers are barely usable and can’t adjust anything to any degree of accuracy, nor can they open menus. I have waited for this for almost a year, since VR was introduced without controller support. But this is a whole lot worse than what X-Plane has. I was expecting the functionality to be at least as good, if not better, considering Asobo’s resources. But it’s much worse… I hope the hotfix is coming, but any kind of QA testing should have exposed all those issues. I don’t understand how it was possible to release it like that…

Seedy…I am pleased with the update except the drop down menu in VR does not work. Using hotkeys like the V or N will open those windows but they are not able to be moved, like to to co-pilots seat.

Anybody else getting 56Kesque downloaded speeds on the update tonight? At this pace I’ll be flying by Monday

I am getting some other weather than clear skies at EGLL at the moment: 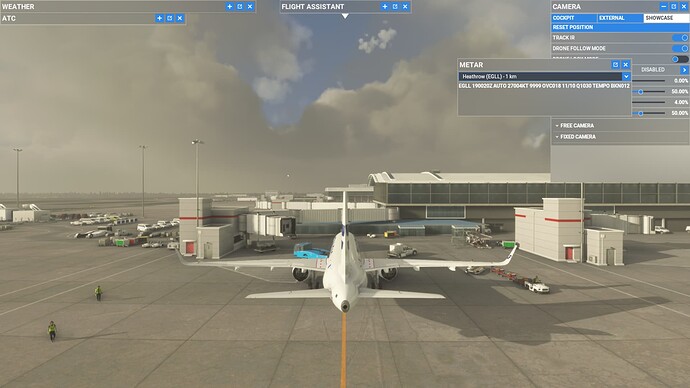 The fog is everywhere now, if not from the beginning, then on the next flight.

So not done extensive flying, but I have to say that so far, this has been a good update for me. Rock solid - no hint of any CTDs etc, and performance very good - on DX11. Yet to try DX12.

Autogen buildings in Edinburgh (and elsewhere I assume) are still broken.

Weather looks good so far too - seems more varied and more immersive somehow. Not yet played with the visibility slider.

Reno air races are fun, but I’ve discovered I am awful! Practice required methinks! Good news is that performance in Reno for me was excellent, matchmaking pretty quick although max I’ve had in a race is 6 rather then 8 - maybe a lot of people still downloading etc. Reno won’t last long if people don’t play of course, and I think private lobbys are essential.

Yet to try VR -not had time tonight. Interesting to see how the controllers work, although I’ve not really felt the need for them - but once I try them, you never know, might be game changing. Intrigues to see what they’ve done to the lighting as the release notes say “lighting issues fixed”

Pretty happy so far - nothing very game breaking that I’ve found so afr and all seems very stable.

I downloaded GOTY an hour ago and tried it out.I was wondering what happened to the third person view of the aircraft.Did Asobo get rid of it or something.Other than that,i was exited to see the custom weather tab finally get a cloud coverage slider and temperatures in Fahrenheit like FS2004 had along with the new humidity option.Hopfully we’ll still get different cloud types,an visibility slider and a savable WX.weather file in the future.

My system survived the update process, but reverse thrust hold controller button functionality no longer works and the VR toolbar is now unusable. The former can be worked around, thanks to the user community here, but the latter significantly affects VR usability and leaves that functionality dead in the water (or should I say air!).

On a positive note, the 100% repeatable CTD I have experienced in SU5 and SU6, when coming out of the game menu in a flight before moving the throttles, appears to be fixed, so yay for that little win!

yay for that little win!

So all the added content and other fixed bugs are not a win?

Anybody getting graphic glitches flashing at the top of the screen in third person and cockpit view when panning the camera up and down.

all I can see is failure. My favourite aircraft has been ruined by glitchy textures (you can now see through the engine cowling in the Beech Baron

Respectfully, I was involved with this airplane in real life and I don’t seem to have the same sentiment on the simulation of it that you do.

While its true that it might be down at this moment, Live Weather was working beautifully for me earlier today. I was wondering why I was getting rain/snow wintery mix, then looked outside and there it was out of nowhere.

You are entitled to your opinion indeed, but when i consider where we was with it last year, I haven’t had CTD in a month, as opposed to 5 a day. I think it’s getting better.

First impressions. Download took about 90minutes no issues went smooth as silk. On opening 2 things the version notes are microscopic and the world doesn’t revolve on plan page. currently flying Pilatus , weather has Perth with a lot of rain. Looking outside cant see nothing unless its south. Which is possible But happy ATM.
Getting better with updates.