So all the added content and other fixed bugs are not a win?

Yes they are, but other than trying out the F18, which was fun in VR even if the trim axis is reversed, the paint is still fresh on my update and I haven’t had a chance to try these other fixes/enhancements yet.

I am normally quite positive on updates, but it seems every other update recently has broken something major with existing functionality and requires a hotfix. While it wouldn’t totally eliminate them, following a disciplined regression testing and rework regime would reduce these occurances significantly, albeit at the expense of meeting schedule.

Can somebody explain to me why after every update I need to download again all the world updates?

If you haven’t had a chance to try the other updates and fixes, how can you pass a judgement like you did?

VR is unusable since mouse or controllers don’t work in game to handle ATC, weather, VFR map etc.
Clouds look even more cartoon-ish now.
Clouds are pixelated, green and pink edges (color banding), some weird semitransparent visuals when two clouds seems to mix.
Clouds mirror themselves in the sky when moving head up&down in VR.
Performance seems worse on the ground.
Another 20 GB of junk added.

This is getting worse with every update.

Curious, what’s the workaround for the reverse thrust issue?

You made me spill my supper

If you haven’t had a chance to try the other updates and fixes, how can you pass a judgement like you did?

Pretty smooth update for non VR users. Weather looks nice when it appears, but seems to change like somebody’s flicked a switch. There’s no way of accessing the toolbar in VR which means VR is dead in the water! I’m a life long fan of MSFS, but I’m really losing the will to use it after shelling out £4K on a top of the line PC to struggle running it. I find myself disappointed with every update despite the eye candy. Could you imagine if Forza Horizon 5 was released like this? (server problems aside)

I don’t believe the GOTY edition is a thankyou. I think it’s a bunch of photogrammetry that never made the deadline for previous world updates. I do appreciate the additional aircraft and do appreciate the Developers work, but it all seems rushed and broken. I’m sure XBox users are happy with it, but I find it difficult to recommend they upgrade to PC anytime soon.

Respectfully, I was involved with this airplane in real life and I don’t seem to have the same sentiment on the simulation of it that you do.

Oh you could see through solid metal in the real thing? I jest, but it is bad what they have done to it. After some more testing I think it maybe on all aircraft where there is plastic on glass.

I never had CTD’s until SU5 when the sim was changed for Xbox and the problems started to occur.

The new live weather could be good, I have only been able to get correct temps, wind, and pressure, the clouds have been nowhere near what it says in the METAR. My huge worry about this new weather system will be how it handles transitions when a METAR changes, friends have told me how they are getting awful transitions where the weather suddenly changes and for example fog comes out of nowhere, similar to REX Weather Force which has pretty much been total flop due to this issue.

Interesting, thanks for that. Does it function the same or does it just decrease the throttle into reverse?

I may have to shelve the sim for a few months, anyway. I’ve been unable to run in full screen since SU5. Fullscreen is a lag fest, windowed isn’t. Now with all the settings resets and having just loaded into a flight to find my camera movements are now inverted…eh. Kinda over it.

Yes.
Which aircraft did you fly, when the glitches occurred ?

That’s a much more fair assessment in my opinion.

I flew for 30 minutes before real weather suddenly popped in. I think all of the downloading may be stressing out the servers. 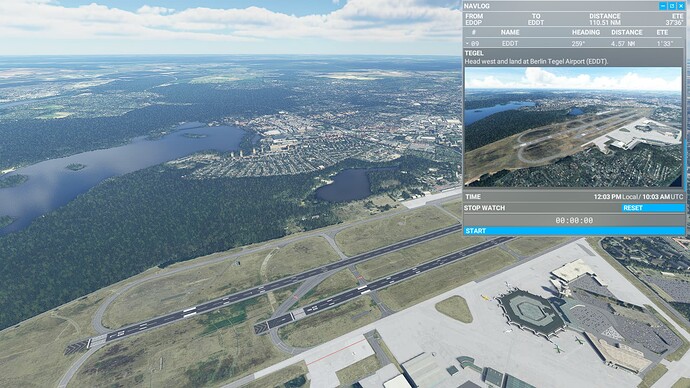 When going for the last possible combination (other runway, opposite direction) I crashed (out of fuel) because the fuel tank selector switch wouldn’t work. Stuck on the empty tank. Pressing continue spawned me at the target airport with an empty navlog. Landing again still didn’t trigger the next leg.

Back in the menu there is now the option to restart from Tegal, continue from leg 3. WTH is going on. It loaded, start from Tegal, nav log is there, tank selector works. Don’t know whether to laugh or cry at this circus!

Interesting, thanks for that. Does it function the same or does it just decrease the throttle into reverse?

My SU7 frustrations after some flights:

Live weather servers seem to be back, and just had my first experience of the poor new system. Horrible transition as I moved into the next Metar area, totally different weather. Awful. Live weather was so realistic before, was so full of immersion as you could see all the different weather around you in the distance etc. All gone now. Immersion killed. Such a shame.