OK so after a long wait since the start of this sim, we finally have the Australian scenery with the Harbor bridge and many other landmarks.
Download of WU7 and AU pack was smooth and no issues. Flying over Sydney I can see the harbor bridge, only to find that the road from the south that leads to the bridge is cut off. 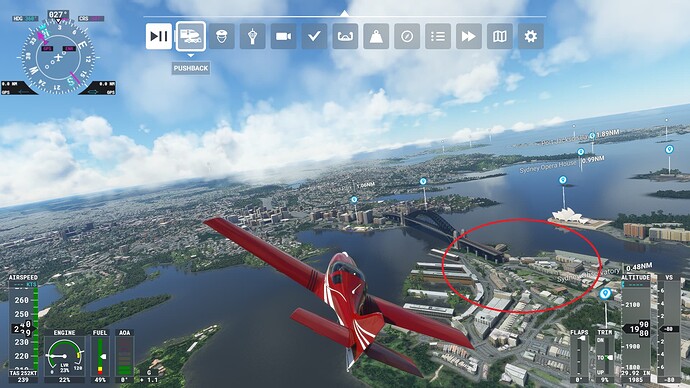 Is anyone experiencing same issues?

Australia is not a sim update it is a World update

I thought I saw mention that YPEA had been cleaned up, but it seems worse now to me. There is even a building at the threshold of runway 18L…
… and a lot of the coastal waters in the new sat imagery is badly white from the Sun angle when the pictures were taken so it really doesn’t mesh with the water it connects to.
Other than not having a nice YWLM and YMML still looking pretty rough, its amazing to fly VFR with!!!

File Zendesk Reports – Scenery is the one thing that seems to get fixed quite quickly if you file,

Just flew from Ayers rock and the landscape is 2 different colours.

Flying over Sydney I can see the harbor bridge, only to find that the road from the south that leads to the bridge is cut off.

Did you turn off photogrammetry on purpose?

I don’t have the screenshot at hand, but if you fly one of the new landing challenges (the dirt strip, epic), you have a big “wall” in the scenery directly behind your approach

The sun will do that

Hey all, I updated to the Australia Scenery, restart sim, it’s on my splash screen when loading but it’s not there ingame, not in uninstalled content either, vanished. Anyone have a idea? Cheers.

Hope your enjoying my Qantas livery for the JU-52. Ju-52 is always good for slow scenic flights. Try deleting your cache in the setting it might fix the satellite textures of that area.

Yes, and on one of the approaches to the international airport. The product does not look finished to me.

Download of WU7 and AU pack was smooth and no issues. Flying over Sydney I can see the harbor bridge, only to find that the road from the south that leads to the bridge is cut off.

Have you tried deleting the rolling cache file?

WU7 - should I delete my Orbx Sydney update? General Discussion

same here, i am on the series s, it runs really really well, everywhere.

^ → Sorry for my expression. In general, the simulation is more than efficient and offers undeniable pleasure. The (too) many reviews are often on points of detail that ignore the amount of work that this software represents.

I read/heard somewhere that approximately 60 people worked on this World Update. I’m very grateful for the amount of free content that has been released and will continue to be released for Microsoft Flight Simulator. The paid stuff is good too as I’ve bought a few packages and planes. The World Update VII: Australia is just superb.

you get that in parts of australia, because they have long fences to keep the animals
restricted. so oen part nice vegetaion, other side all eaten and gone.

The Sydney Harbor Bridge shown on my screen is a plain old bridge, not the arch steel superstructure bridge shown in the MSFS opening picture. I followed all the release notes when installing including the information about the Community Folder. Wondering if I should delete and reinstall the update!!!