You’re not kidding, and believe it or not I was BAME led by the speed when I for a 56k modem! I started at the beginning of the internet pretty much, and my first modem was a 1.2kbps modem, I then (eventually) went up to a 14.4kbps before feeling I’d died and gone to Heaven with a 56kbps modem. On my first modem, I literally had to type in the long and complicated code (I was still on a DOS connection, not Windows!) to sign into Dorset Internet. It did all the bussing and beeping before deciding whether it was happy or not. It took anywhere between 10 and 30 minutes to get a solid connection… and if someone decided to phone me, that was the connection lost and had to start again!
Oh such fun days LOL

I have the same problem and I don’t use cache at all. I don’t know how to get ride of such flat gaps.

Was trying to land on the newly updated island off shetland (name escapes me) and couldn’t get the plane to land in time before ran out of runway.

LOL You mean you couldn’t stop at the shortest commercial runway in the world - the 370 meter Out Skerries dirt landing strip - that runway?

Yeah totally agree. I was blown away by this airport. It looks even better in VR and totally as good as the pictures suggest. Honestly this is next gen even for MSFS. I don’t know what tech they used to create this - photogrammetry? But it looks like a big improvement on a similar technology they used for the equally small Saba runway.

I think in the future there could be more AI involved to produce procedural content with the same effect - something actually Laminar could use for X-Plane for it’s plausible world as they are not bound by satellite imagery and could easily IMHO produce something in higher detail and visually more stunning albeit less accurate than MSFS.

While my son was growing, I bought him a significant number of game consoles and games - from the Nintendo family. Perhaps surprisingly, he grew up normal and is now gainfully employed. He has reciprocated by buying me the components for my MSFS computer and building it with me.

I did however buy the game for myself!
To make this on topic, the UK update looks great for me. I landed at Barton Aerodrome by chance today and it was great. Loved the marked grass runways, the playground and the tower that you can look into!

Same issue, alongside this:

Report it here. Anyone having this issue, report it to this topic.

Unless more people vote on this issue, this will never get resolved because Asobo doesn’t fix top voted issues.

LOL… i thought maybe there was a mix up there…

the UK update looks great for me. I landed at Barton Aerodrome by chance today and it was great. Loved the marked grass runways, the playground and the tower that you can look into!

I think, ( speaking personally) the issue is in VR, the new update in some heavily populated ares , like central London… it is way too heavily embellished, causing many systems to struggle, i had no problem playing MSFS in VR before the update, i even had the London scenery pack… (which i had to remove

It is still an airport (despite the runway being used as a lorry park), they have helicopter traffic and even a basic radio service. Plans are also in place for it to be redevloped and reopened in late 2023.

The issue isn’t just that it’s closed IRL, but it was included in the game from even the Alpha days (trust me, i was there!) but it was removed in the last update. If it hadn’t been there form day 1 it might ont be such an issue, but it was, so people want it back!

Hi guys,
you know where i found the solution for each start the MSFS need to set all options, without that can’t start the game.
Thank you!

Help!
this download is not appearing in my content manager - but when I go to the market place
have been unable to “buy” it - I think because I have never been able to get steam overlay to work in MSFS - before anyone asks overlay has been enabled in steam correctly but shift+tab
will not bring it up (All other games I have shift + tab will bring up the overaly but not MSFS!

You nailed it! I ask myself if one would complain in 1000 words about his steak in a restaurant when the texture is not top notch? Together with the wine it may be 129 Euros too

Clearing cache had no effect. There clearly are areas in London that somehow are missed by the photogrammetry tools creating the scenery. You can see them in this screengrab. Nothing to do with cache or the setup. 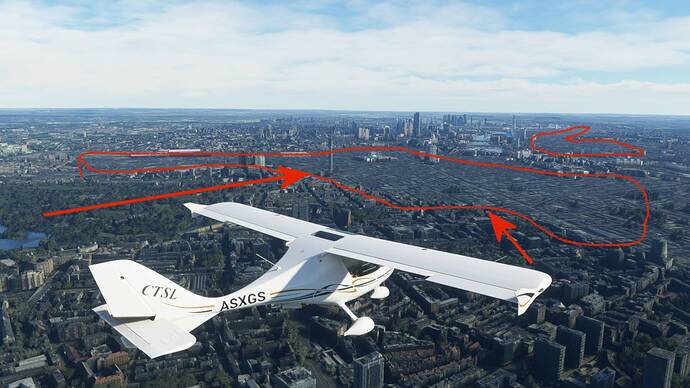 You have a conflict with London Landmarks or another add-on. Remove it and then check again.

300 baud ha. i remember shoveling coal into the back of monitor to get it going

Several times even deleted completely MSFS and reinstalled again, no change at all, still with the default buildings all over UK and London

RESOLVED.
Thanks for your comment. I have made it a rule NEVER to install any addons or scenery but only install and buy through the market place of msfs.Thinking that was safe. Your comment suddenly reminded me that once I let myself be tempted in buying/downloading the ORBX london landmarks pack. Well that was stupid.
I have removed it and all scenery is now correct. I also had the ORBX london airport, which I have also removed but it was the landmark pack that caused the issue.
Other than that nothing in community folder or addons.
Just goes to show how you can waste your money. All resolved now.