Does anyone use PSXT+ Real Traffic?

The first option just seems like an immersion breaker for me. I’ve had to do that before when an aircraft got stuck on the taxiway, blocking my route to the active. I felt a bit dirty afterward

The first option just seems like an immersion breaker for me.

You can avoid that by reserving your gate at the destination airport.

Was it actually stuck or was the R/L aircraft also doing that? When using a tool like this, it’s important to cross check this. As reported most of the anomalies have been what the real aircraft was doing, such as the rejected take off, stopping for no reason and then starting, etc. That all happens in real life when things need to be coordinated and such.

I’d suggest it wasn’t actually doing this, but FR24 had the aircraft ‘stopped’ in the location where I encountered it in the sim. It then disappeared from that location in FR24 and was halfway down the runway, so an FR24 issue or transponder.

Whereas today, after arriving at LHR, there was a United 763 stopped similarly not too far from 27R. FR24 as well but began moving again after maybe 4-5 minutes, so perhaps had been told by ATC to hold for some reason

Yup, that’s the fun of it. You’re dealing with it just as everyone else is. What’s more immersive than that? Sadly you can’t listen to ATC in the UK. If you dig around in here you can find my story on being at LGA with a storm and my experience on being “stuck” for 40 minutes. That’s one thing that has always perplexed me, people wanting their “precious” ATC and AI using real procedures, isn’t going to work, not well, or just have the AI with procedures and supplement the ATC yourself. Saw a post from FSLTL to the point of someone becoming desperate and depressed.

For those of you using LiveATC audio with PSXT, how realistic is the timing? Is the delay short enough that it seems pretty real?

LiveATC is delayed 30 seconds or so per their feed requirements. So with LiveATC delayed 30 and 30 being the default for PSX, it’s a match.

Also, does the ingame ATC follow and talk to your plane, just not any other AI traffic?

If you use in game ATC it’ll respond to you and only you, since the other AI planes are under the control of ADS-B data/FR24 and not the sim. Can’t guarantee you’ll be given the correct runway or taxi instructions and the in game ATC will do what it feels right and the AI will be following real world instructions.

Thanks for the info. Wil PSXT show GA planes, or at least ones with flight plans? Also, will it correct bad AI behavior like not stopping at hold short lines, taking off without clearance, and just driving around the airports aimlessly?

PSXT shows EVERYTHING. In the program you can check to enable showing GA, Helicopters, Gliders. If it’s on FR24 it’s in your sim. It will fix ALL issues because it’s taking the real world planes being directed by pilots and ATC into your sim with a 1:1 ratio.

Just one more question. Someone told me it only works with their own AI parking files. No MS files. Not sure what he meant. Do you know?

Don’t know what you mean with MS files but PSXT learns on the fly where real live aircraft park at airports and stores that in so-called airport files for later use to generate static parked aircraft.
It stores day of the week, hour, airline and aircraft type.
PSXT reads the MSFS airport .bgl files to get the coordinates and headings of the parking positions.
The PSXT installer already comes with a number of airport files for major airports to give you a jump start, but after that it will start learning.

I’m testing now. How do you set the delay to 30 seconds? Time Offset is greyed out in Real Traffic. Also is there a list of airports that require transponders turned off, and therefore planes disappear? Is that the only reason planes disappear right after landing?

Delay is set automatically in the parameters folder in C:/user/appdata/roaming/msfspsx
Again, the program pulls ADS-B data and injects traffic based on that data, there’s nothing but load and go. You can change very quickly parking percentages or range of depiction, but those are the only ones you would generally change. The planes will disappear after landing if there is poor ADS-B coverage. For example, there’s rarely any ground traffic when I fly into STL except at the gates, departures don’t typically appear until around 500 from the runway, my guess is there’s a receiver issue and thus aircraft aren’t captured until 500 feet.

OK this is at KRSW in Ft. Myers. Couple planes at the gates, but landing p[lanes disappear after landing. At Seattle airport it looks like all planes taxi and show as normal.

When you see this happening cross check with FR24.com. Find a plane close on arrival and track it’s position from the website and in the sim and see what happens.

Actual planes are landing based on LiveATC. As long as you use Live Weather, can you change the time of day without problems? 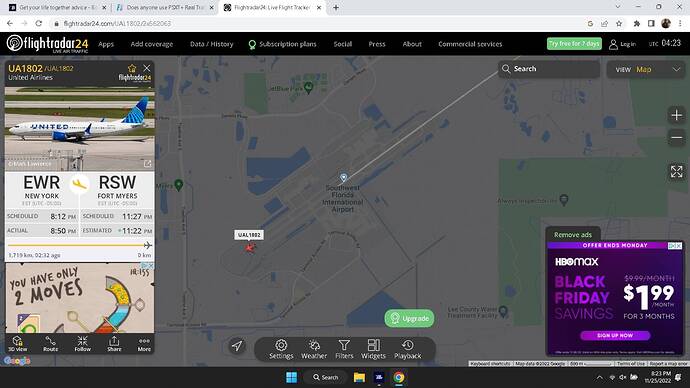 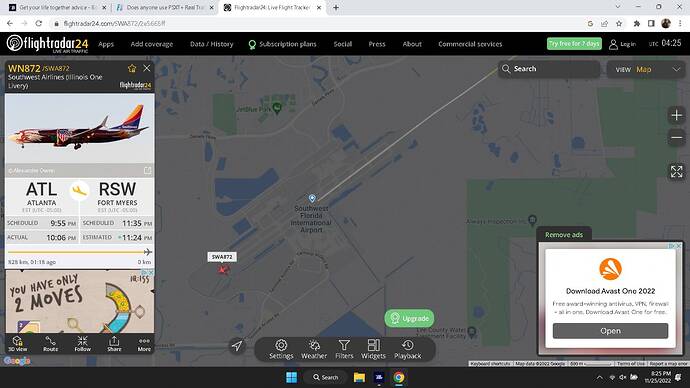 KRSW21920×1080 166 KB
There could be several reasons, aircraft switched transponder off or perhaps KRSW doesn’t utilize ground radar or given the airport conditions or time of day they have it turned off. There’s so many reasons. My bet would be on they don’t run ground radar.
UpstateElf898 November 26, 2022, 4:29am #163

You can change whatever you want in the sim with weather and time, again, they are flying from ADS-B the sim has literally no affect. The only change to that extent would be adjusting the time period of the data. Being 2 am and having the data set for 5 in the afternoon.