but even with the lowest setting,

as say’d… lot of users reported, that the settings of low,medium,high makes no difference.

i trid reinstall the whole sim, a clean install, and leave every thing to default, even just install without any extra package, the problem remains.

If it’s an consolation it took me:

thanks for that, i’m gonna keep the current until they have a patch for it. it takes me the whole night to download the game because of my bandwidth. i don’t know if it’s the issue of the ryzen 5000 series or just me, could it be better on intel?

I flew over the same area as you in Tokyo, I do not experience the fps drop and im on a ryzen 3600 so I doubt it will be better on Intel. There’s just a lot of problems in the engine code in my opinion.

There’s just a lot of problems in the engine code in my opinion.

Absolutely agree. You are completely right. The problem IS NOT our hard or software, it lies
solely and exclusively in the precariously programmed graphics engine of MSFS.

thanks for your testing, maybe it’s an zen3 issue, i’m not sure. as my test so far, not all airports have fps drop, i hope they can fix soon. this is an amazing game anyway.

not all airports have fps drop,

=> exactly what I already mentioned…

that’s something matters in urban airports, i even tried extremely, that’s is to set the resolution to minimum which is 640*480, the whole image is blurry enough, guess what, the fps is not even changed. i really want to know what holds the whole sim behind, what does the “manipulators” do in background.

this can possible only the developers check / answer… Therefore allways create a ZenDesk ticket in case of issues ( also performance issues ).

Dont know what to do anymore

Upgraded to the i9-9900K. Great improvement in graphics.

Check for my lenthly discussion on this upgrade in CPU. And resulting
graphics improvement. Many did not see it but I did.

Not surprised 8c/8t is bound to run into a cpu bottleneck.Similar situation with my current cpu 6c/6t is not even enough for this sim to run at its full potential.Unless you’re coming from a really old CPU I found the biggest boost to performance for me in this sim was a GPU upgrade.

interesting! Maby devs can share some light over this

I was thinking that maybe I would go for the new i11-10900K or whatever the new Intel CPU is ( I’m Intel only) but the main thought was:

If the new Intel Xe GPU that is in the Intel CPU chip and if is would run 4K at 60 FPS:

Then, I would buy the new CPU and required new Motherboard (Z590) and not have to buy a new Nvidia 3000 GPU card.

But, it looks like the Intel Xe GPU is only good for 1080P and maybe only Mobile CPUs.

I didn’t see it in Afterburner.

Not surprised 8c/8t is bound to run into a cpu bottleneck.Similar situation with my current cpu 6c/6t is not even enough for this sim to run at its full potential

I’m surprised I don’t get the same with my 9700K. You might want to try this:

The main bottleneck is a singular big thread doing the bulk of the job per frame and the faster single core speed, the better fps in flight simulator. All other thread/core activity is most likely small tasks spawning in the task scheduler (not the Win10 one, the internal app own scheduler) and overall represented as “some” activity on all remaining cores.

I am replying this because I still can’t understand the main single CPU processing capability of FS2020.

Although I did see something in the FS2020 Development FPS screen showing 4 blocks and indicating that all the real processing power was done in the 1st block. Is this where the argument comes from?

Just can’t make myself realize and accept that a 8C 16T
Multitasking CPU would be limited to 1C 1T processing.

The argument is that 4C 4/8T CPU is fine for FS2020. Does as much processing as an 8C 16 T does. Only benefit as to get more processing comes from only a CPU speed increase.

Then, I was told how to do a screen shot: 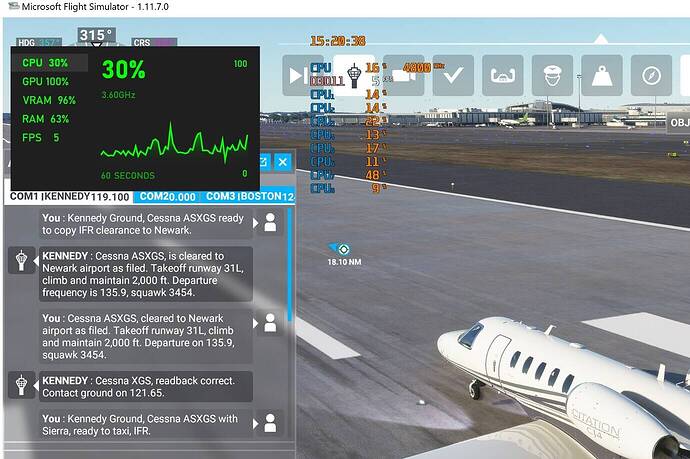 But maybe it is. The screenshot is just one moment in time. The percentages change in real time and are very dynamic if you look at them in real time with MSI Afterburner.

We had a long and detailed discussion in this thread over the 9700K vs 9900K and subsequent 9900K vey improved graphic performance.

Please accept my apology for this post but I can’t understand how FS2020 does all it does on: “one main processing singular big thread doing the bulk of the job per frame”. Why buy a Core 10, 12, 16 CPU hoping FS2020 will improve in performance and FPS ?

This shall give you some info about all this:

Do you mind providing some pointers agreeing with this? Because as far as I know, and I should know, XP11 multi-core tasking system is actually a reality and one of the many improvements XP11 benefits from (and not just for VR and Vulkan). Quickly found with my search engine: And here is the main developer blog “Threading” articles:

if you’re not a developer, it will be quite hard explaining all this even in layman terms. But you can try already in your example above compare F2020 running like you did, then in changing its affinity mask to using only 3 or 4 cores instead of 8 and see whether this changes anything (fps/stutter wise)

The processors to be preferred today, the high frequency intel processors, the ryzen 5000, not the 3000 because in single-core they are bad and especially the future intel 11900k which will be the top this year for FS2020.

To know if you are limited by your processor and not your graphics card, you just need to lower the resolution of your screen, if you still have the same number of FPS whether in high resolution and in lower resolution it is because you are CPU limited.
In my case I am GPU limited in 4k at high altitude with a rtx3080 and CPU limited at low altitude. In 2k and FULL HD I am still CPU limited.

To know if you are limited by your processor and not your graphics card, you just need to lower the resolution of your screen

This is exactly the opposite of what it should be. You lower res to GET CPU limited. Literally every other game.