So with the latest update it seems that eye adaption has been completely removed. Now some people will like this because it’s realistic, however for me there is a problem.

Namely that the cockpit (Fenix A320) is now way too dark for me, is there any possible way for me to re-enable eye adaption?

Next time the team should review this and add it as a option OR, tone it down but not get rid of it completely. This is game breaking for me because I have my monitor perfectly calibrated for my other games, I don’t want to have to re-calibrate every time I switch.

PLEASE tell me there is a way to bring eye adaption back, weather it’s throough user.cfg editing, or the dev team brings it back.

6 Likes
All cockpits dark after SU10
Please bring back auto exposure as graphic option for SU11
Flight decks are way too dark especially at night and with overcast
Instrument readability / Cockpit too dark / Eye Adaptation
Looking directly into the sun doesn't blind you
YearlingDeer319 September 21, 2022, 5:43pm #2

Have you tried using the internal lights etc? Works for me.

Yep tried it, eye adaption is completely gone for me even though I have it on in the user.cfg.

EyeAdaption is still present, but seems the effect is much more “less” which match with a Wishlist topic…

May be we should have a look into the Release notes.

I saw it in the release notes, auto exposure was tweaked. But for me it was tweaked WAY too much and the sim is unflyable especially at night or overcast. There has to be a way to at least tweak it up a bit.

I saw it in the release notes, auto exposure was tweaked.

yep… I found this topic

Can we take this beta to revert eye adaption to how it was at release? Install, Performance, and Graphics

it’s fine mate, just read the notes. [image] it has never really worked well, they are changing up some things but it’s still bad. with and without VR it doesn’t really simulate how our eyes behave. it looks like a simulation of a camera more than the human eye to me.

Has eye adaption been removed in latest build? General Discussion

I find that my eyes do not get adapted when changing view from outside to inside the cockpit. Which means its a bit dark now. I also think it affect night flying as the eyes do not get adapted to the outside darkness and making things too dark. Now, i am aware many people did not liked it, it was overexposing the outside etc… but i dont think that disabling it all together is the right solution. Maybe a slider ?

it was tweaked WAY too much

the effect is now realy a bit less noticable, but it is present. May be we get somewhen a slider for that

I looked, unless I’m missing something there is no slider so some of us are stuck with this.

… the wish was about that eyeadaption can be disabled or with a slider the effect “customized”. Now seems we get the variant with the existing effect, but less noticable. We can may be only wait.

I noticed the Longitude cockpit was much darker after I downloaded the NVidia Studio driver and started the sim today. I downloaded and ran the HDR Calibration Tool (MS store) and ran it, but it made no difference because most of my selections were in the darker range. I ran it again and put the sliders in the middle, and my cockpit brightened up quite a bit.

I’m not saying that’s your problem, but it made a big difference for me, and might help if you have HDR.

Best of luck to you.

Does the HDR Calibration Tool change it for all games or only MSFS? If not is there a way I can make it where it only changes MSFS values?

Oh no! seriously!? Im about to start the game and dreading the update now. 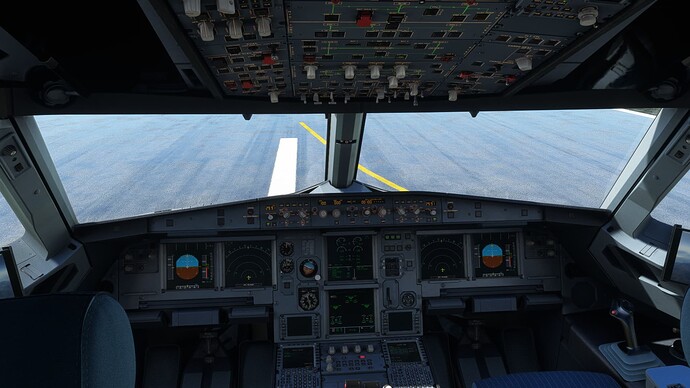 Here is the cockpit, overcast, maximum brightness ON with monitor. 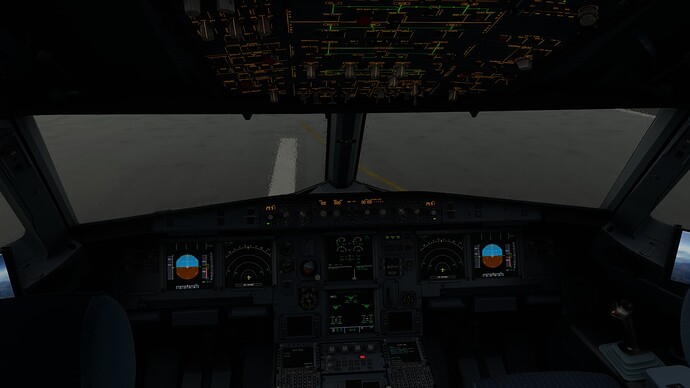 This is serious, the eye adaption effect has to be improved upon a bit or at least the contrast.

The ONE thing that separated MSFS from the other sims was the dynamic contrast simulation (eye adaption) but now that it’s essentially been removed it’s been downgraded back to FSX style contrast.

Haven’t tested it yet (TrackIR) - just downloading the update - Dear God please don’t - are they serious ? I’m getting really “mad” - this is exactly what I predicted in one of these threads - it may be that the feature was too bright in one angle but it made the cockpits look more lively and “flooded with light” - now again this nonsense - just because 300 hundred don’t like it they turn it off for the remaining 1500 - why not just have ONE STUPID OPTION - on, off or adjust !!!

it is not completely gone, but only tested with default planes - is still noticeable - horizon not so overexposed - at least that is positive - bad weather test still pending !

Yep, cockpit much too dark now in SU10

I’m in the FBW A32NX and even with all the panel floodlights and EFIS lighting set to max, it’s still way too dark. And it’s really hard now to read the dark Nav display.

Dear Asobo, please can you reinstate the cockpit lighting level as it was in SU9 (maybe as a slider option) ?

The eye adaption & realistic pre-su5 clouds were the one things that separates MSFS from the competition, now it’s all the same.

Asobo PLEASE BRING EYE ADAPTION BACK AS A OPTION!

I’m using an HDR monitor at 1440p and I set eye adaptation and color gradient to 0 in the config file and everything is near perfect both in and out of cockpit. No bright glare coming in making the cockpit too dark any longer.

Changing user.cfg does nothing for me, my monitor is not capable of HDR so I can’t mess with that sadly.

For anyone else who just got SU10 can you confirm on your end that your flight decks are too dark? I tried with multiple planes both addon and default and they are all the same. If this is the case we need to alert Asobo ASAP so they can hopefully fix or at least brighten up the exposure a bit for SU11.

Ok so I just uploaded this issue to the bug section, hopefully the team can take a look at it.

At the very least bring it back as a option or as a slider, don’t just get rid of it completely!