First impressions with the Nvidia 4080 in VR

Short version: I’d say the advertised 40% increase over 3080ti is realized in most situations. Terrain LOD at 200 most settings at Ultra with HAGS turned on and DX11. I will still search out a 4090 as I would expect it to be the ultimate VR card and for only a few hundred dollars more Ikd say it will be the best option.

Side note: this card is gigantic. It’s amazing how big it is.

For my first test I went to Hawaii. For some reason, it likes to drag my system down low 20’s FPS and I think it’s weather related but since it’s consistent I started there. Out of the box it was no better than the 3080ti. I turned on Nvidia DLSS with and then all of the sudden I’m averaging 40 FPS (remember I run most on ultra). This is fantastic. All previous things I’ve seen say expect a 40% increase on FPS and I concur. Also noted below I had Nvidia Studio driver. Switched to latest Nvidia Game Ready driver and got improvement. Gained a couple FPS turning on HAGS.

Next test I went to LAX. No weather there to speak of and FPS stayed in low 20’s….which is no better than I was getting with the 3080ti. Switching ON/off DLSS didn’t make to much difference. Not sure what’s up with it. I would think the rest of my system should be sufficient but have to say with the 4080 I do get the indicator “CPU Bound” here and there in the Mixed Reality Companion App that shows FPS in the headset. I updated below that my Terrain LOD was set at 325. Lowered to 200 and now getting +40 FPS. Also the CPU Bound message has now gone away.

So that’s the extent of my opinions so far. Getting ready to do some more flying. Maybe I’m missing some settings somewhere but I did not expect to be in the low 20’s FPS anywhere. I want to say I should have got the 4090 but seeing how not much improvement over my 3080ti, I’m not so sure my system is not bottlenecked elsewhere!

Updating after a while longer. I don’t know if the sim updated it or at one time I updated it but I found my terrain LOD sitting at 325. Put it down to 200 and my time around LAX sat around 40-50 FPS. Quite an improvement. I then went to Paris where there was some rain going on. Paris will usually drag my system down pretty heavy and even with weather I was staying around 35 FPS. With Nvidia DLSS off it was low 20’s. Finally finished out at JFK in NY which is always resource intensive. About 25FPS there +/- 5. That’s with TOD at 200 and DLSS on. I think that’s what my 3080ti would do.

I feel like when my 3080ti was in I tried DLSS and the performance went down. On the 4080 it is a definite improvement having it on.

More testing tomorrow. As of this moment I’m not super-duper impressed with the 4080 over the 3080ti but it is an improvement. I feel like I’ll be tracking down a 4090 but we’ll see.

Realized that I was still using Nvidia studio version drivers. Downloaded latest game ready and did clean install and that improved things even more. Might play with hags and direct X and see how that does.

Yeah, given that the sim is CPU bound, the new card probably won’t add much improvement. Try FSR 2.0 Performance for higher FPS. I was getting 60-70fps around my local airfield today, but it was not very sharp at all. Good idea to fly at dusk and dawn where the lighting hides a lot of the graphics issues.

Nice write up on 4080. Got the same card! yes its Huge, but running cool and power efficient.
12700K, 32 GB, G2
coming from 3070 for me its a mind blowing improvement in my game play. I have pretty much every setting on ultra and GPU is running just fine. Didnt think it was possible but here we are. I am def CPU bound at this point even with cpu optimizations. So no buyers remorse here on 4080!
I turned Hags on, DX12 and low latency in sim and its been smooth. I am in mid 50s 800 ft over NYC even with clouds on ultra. DLSS Quality.

Still trying to dial in FSR/CAS or all off. I go back and forth using MR, but prob will keep it off as its not needed.

More testing indeed, but I feel I can finally just load any plane anywhere and fly!

If you want to put the GPU through its paces, go and boost your OXR super sampling. A few of us with 4090s around here are doing 200% in OXR which is a super sampled resolution around 4400x4400 with the G2.

Try 150% with your 4080 with DLSS Quality and use FSR sharpening in toolkit. I think it will surprise you.

Also keep your TLOD down. People crank that setting and you really dont NEED more than 150. Its a big CPU overhead.

The issue at the moment is, I need to drive the resolution at around 80% in VR - I met a friend with a 3080TI and the G2 and the visual quality was breathtaking instead to mine.

Do you think, I can run the sim on 100% resoluion and TAA? (I dont need all settings maxed out)

If you jump from 2000 Series go for it. But your CPU will bottleneck a 4000 series. You might upgrade your CPU too.

Thanks for the fast reply!
Yes the CPU will bottleneck the 4080, I’m aware of it.

The most required “feature” for me will be the 100% TAA and 100% OpenXR setting, the enjoy the full capability of the Reverb G2 in FS2020

I will not be able to max out the sim, but thats not the target.
I was also thinking about to go for a 3090 or 3080ti, but the price difference between is too small - and the 40 series will bring DLSS 3 in case of…

Well I added HAGS looks like I gained a few FOS. How do you turn on DX 12? Can’t find the post anymore.

I wish more people would understand this basic fact. The lower the resolution, the more cpu bound you are, doesn’t really matter which gpu is used. I’ve come from rtx 2070 to rtx 3080ti and the logic is always the same. Raise OXR supersampling as high as possible (until diminishing returns) to squeeze as much as possible out of the gpu. For most people 150% should be the sweet spot, depends on what headset you’re using. For the G2, anything 3080 and above should go for 150%. As for 200%, i feel that’s pushing too much into the diminishing returns even with 4090. 180% should be the max, i think. It’s better to just push the gpu with visual settings after that. So a 4080…definitelly should go for 150% oxr and DLSS to quality. I highly doubt that would make him cpu bound with 11900k. I have 9700k and 3080ti and i’m running 150% oxr, most settings high/ultra, DLSS on balanced and i’m not cpu bound. I do have to keep terrain LOD at 100 though, before SU10 i was going at 200 lod. Not sure what’s changed but i feel cpu optimisation is even worse than it was.

It’s on the PC graphics settings tab, not the VR tab

I loaded up at KLAX with these settings, PMDG 737-700 many MP aircraft and FSLTL and pull about 35 FPS. Looks great, runs smooth and provides an excellent VR experience.

With a 4080 I’d expect similar FPS in this area as it’s CPU-boundsville but elsewhere, where I get FPS in the early 40’s, I’d expect to get more but I am already more than happy with 40 FPS so I’m not seeing how I would benefit much. I suppose I could crank in-game VR settings higher, but from my own testing I can’t notice any difference at higher settings with the exception of clouds which do look better at Ultra.

In any case, I thought I’d provide a comparison data point and am keen to hear if you get more out of your system through tweaking.

I’m really not sure what to do.
If I observe the dev monitor, it is constantly switching between limited by Main and GPU 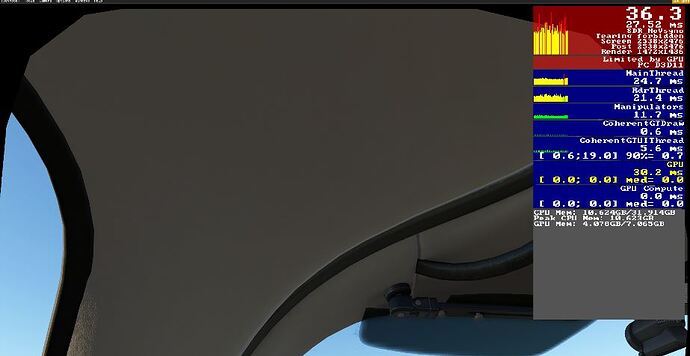 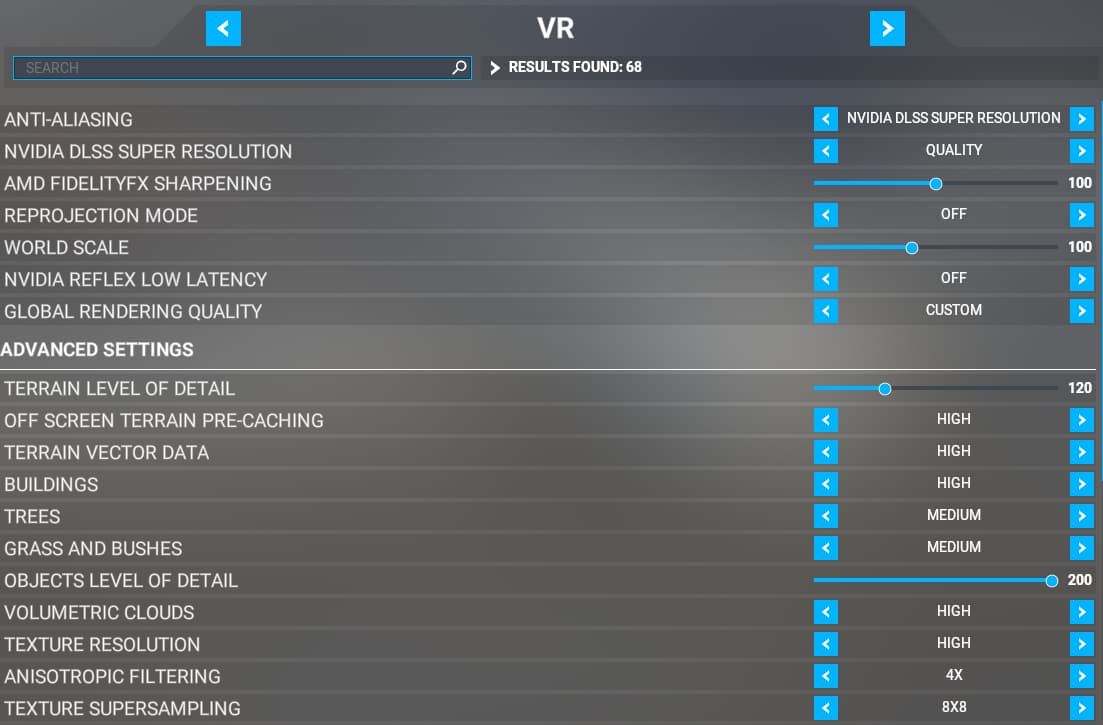 Maybe you can help me - thanks

As others have said, drive a 4080-4090 card in OXR to 150-160% and 100% render scale in-game with the G2. Use the toolkit CAS or FSR sharpening instead of the MSFS option and DLSS Quality. The clarity will blow your mind, it’s as if you have just upgraded your headset. I never thought the G2 could look this good and for me it’s the major unexpected benefit of the upgrade in VR, not the extra FPS. With a 4090 I can set MR at 45fps in the toolkit on mostly ultra in rural areas flying gliders, choppers and biplanes and it all looks smooth, sharp and wonderful. TLOD depends on your CPU, but with a 5800x3D I use 200 in DX12 as I mostly fly away from big cities.

Oh, must add, for peeps trying out their new GPUs, maybe don’t immediately jump to known stutter towns like NY, London or Tokyo. Give yourself a break (and a far nicer view) and try somewhere more FPS friendly like Rome or Venice, preferably near sunset. I was flying the Beaver floatplane yesterday over Venice, landing on the Grand Canal near St Mark’s and getting stunning performance and it all looked eye wateringly beautiful. My wife was nearly in tears, as she relived her visit to Venice as a young woman and her first view of the canal outside the railway station.

The constant switching is good. It means your GPU and CPU frame times are very close so they are not waiting on each other. If you can stay GPU bound all the time it would be ideal. I believe the reason the 200 and 150% resolutions work so well because they keep the GPU working harder than the CPU. Going to test this today.

It’s a great card, but way too expensive. Even the completely overpriced 4090 is looking like a better deal. Really hope AMD RDNA 3 is giving them some competition and forces them to rethink their pricing.

Ok I tried it out and it’s pretty much the same as DX11 except with 12, I get the “catch-up” effect looking out the side window where the frames seem to quickly do a catch-up ever second or so.

Kim generally getting 45 FPS with TLOD at 200 and most of my other settings on ultra. Flying 300 ft above Central Park in NY will drag it down to about 30. All things considered it’s working pretty good.

Very strange. I had a 3080ti and with dlss the performance was always higher.

Hopefully there should be some proper VR reviews coming along soon for the 4080. There are too many variables with people’s set ups to get a true picture of where the performance is really at compared to the other options.