I’ve just finished installing MFS and followed the YouTuber VR Flight Sim guy for optimal settings for a Rift S. I just gave it a try but performance is terrible, very jumpy and jittery to look around but I am fairly sure my PC should be able to handle this. Am I doing something wrong?

Also, when I run the sim, my fans sound like they’re about to explode…

I’m not super technical so any help would be greatly appreciated!

To be honest it’s a bit of a mine field at the moment but have a read of these posts (and sub posts if you have the time).
They are not specifically for the rift S but I used them with my CV1.

Do you have oculus beta installed?
Oculus debug tool is very useful too as you can set SS and reprojection from there.
I limited my frame rate in the rift CV1 to 30 using the CLI tool but I’m not sure of the syntax for the rift S.

I’ve just finished installing MFS and followed the YouTuber VR Flight Sim guy for optimal settings for a Rift S. I just gave it a try but performance is terrible, very jumpy and jittery to look around but I am fairly sure my PC should be able to handle this. Am I doing something wrong?

Also, when I run the sim, my fans sound like they’re about to explode…

I’m not super technical so any help would be greatly appreciated!

Follow this and try the sim on default VR sliders first and tweak from there. 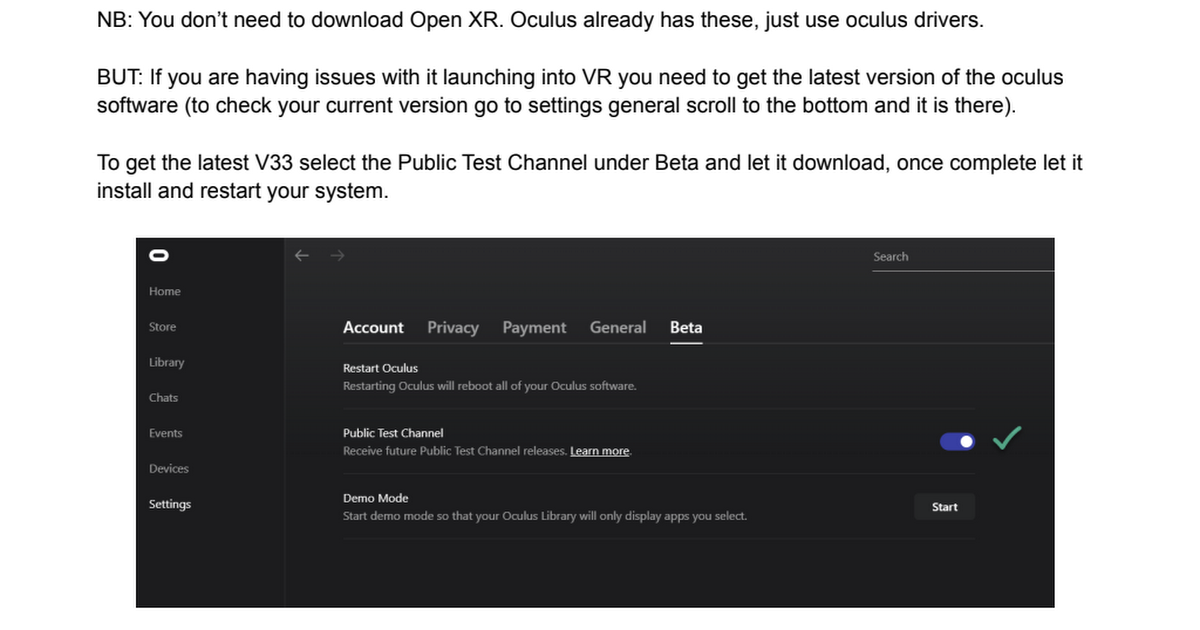 Welcome to the Flight Simulator Forum.

I am also using RIFT S but with a RTX 3080 Card which is still no way Driver Supported for VR in this SIM by NVIDIA or the SIM developers and your card should perform better than mine currently.
MY CPU is a i9 10900 so thats not so far away from my Hardware then CPU wise.

Which Version did you buy i mean Windows Store or Steam Version?

I do own the Steam Version and there i use the Standard SteamVR and Standard Oculus Settings.
Currently there is a white Flashing inside the SIM BUG with Oculus Beta, so most of us reverted back to non OCULUS BETA Software until this mess is fixed.

Did you first place test with the Standard Default Settings in all Tools or did you directly switch and Tweaked any Tools which may now mess up your Experience?

Can you activate VR Framerates in the SIM ?

What Resolution / Render Scale / Location and Weather Conditions did you test in VR so we could compare?
Screenshots would be good also.

Just saw MouthyGrunt97 added a PDF which you can also test.

It sounds like you are suffering from the same issue I’m having. It seems that the sim falls into some kind of performance black hole when you switch into VR (and sometimes when you just go into the settings screen, and other times just when you load up into the menu).

I’ve had this issue on two completely different PCs, one of which I’ve just built. Sometimes you start the sim and everything runs well and smooth but more often than not it gets itself into this broken state with everything stuttering and even the headset tracking struggling.

Does any of this seem familar:

I’m experiencing random and dramatic drops in performance to <10fps in these situations: right after loading the sim in the menu after clicking into Graphics Settings menu after switching into VR mode The sim was freshly installed on a new build (Ryzen 5600x, RTX 3070) and ran fine with excellent performance in VR for a few test flights of about 30 mins each. Then this problem appeared after no changes anywhere and I cannot resolve it, even after a reinstall of the sim. Right now it’s a matt…

I’m reading a bunch of VR performance threads right now and it seems to me that something is going wrong during the sim loading up and initialising, or when switching into a different graphics mode. It’s happening to some folks all the time, for others some of the time, and for others not at all.

This is why we’re seeing poor performance on good hardware. That’s someone who isn’t getting the sim to load up properly at all. For me it’s about 1 in 4 on my 3070 system. On my old 1660ti system it was about 3 out of 4 times it would load properly and run well.

There is a deeper and intermittent performance issue going on with this sim and it isn’t happening every single time you load it. I’d be interested to hear more details about what you’ve tried and if you have ever seen good performance in VR.

I too run an I9-9900K PC but with a lower end RTX2060 card.
After faffing and tweaking for weeks, what worked best for my Rift-S are these:-

The Oculus Rift-S though not the best, is not far off the top headsets. Resolution may be a little grainier but you can always right click on the mouse to have a quick clearer glance of your display or gauges.

Though the current latest and greatest headset may have higher rez they too give a limited field of view very much like looking at the world through the goggled eye of Stuart the one-eyed minion. We may all crave for a headset like the Varjo with a field of view of a Pimax but no such headset is currently available and even the current crop of unobtainable GPUs are not up to snuff to drive such a headset.

I say stick with the Rift-S for the moment. It may be the best value to tide you over while you save your bullets for a truly worthwhile headset & GPU combo VR upgrade a generation or two hence.