In case you want to do it manually by yourself, these are the flaps values to fix: 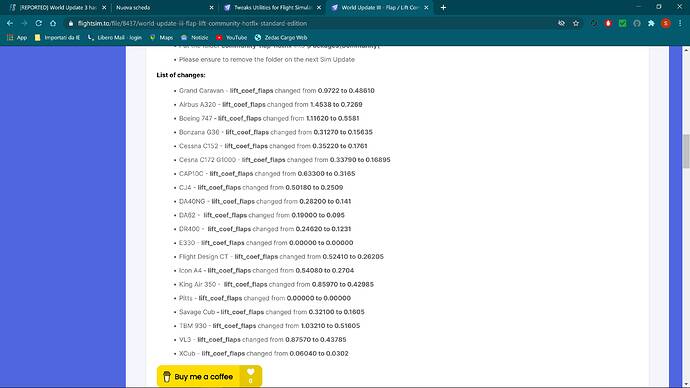 A technical note
If your path is something like:
C: \ Users [YOURUSERNAME] \ AppData \ Local \ Packages \ Microsoft.FlightSimulator_ \ LocalCache \ Packages

The AppData folder is hidden by Windows default

I really would like to have a straight answer from Asobo:

You stated that the problem is too much lift on the flaps, and suggest we adjust the cfg files to compensate. My experience is that, even with this change, aircraft do not behave as they used to. I just (apparently) stalled at 85 knots in the C172 (G1000) at full flaps as I was coming in to land, and crashed nose down into the runway even though I was flaring and only a few feet off landing.

This is by no means the first time it has happened since the update. I am at 200 hours flight time in FS2020, and previously with an awful lot of successful landings in the C172. This sim no longer gives me pleasure. It was actually a step up flying in X-Plane yesterday, with the aircraft behaving as I expected - obviously the scenery not as good, but at least I was not in fear of my (virtual) life.

One last thing
in the latest official patch they wrote:

I checked before editing
This value was constant across all aircraft, regardless of Type and Size

I think we all agree on this

The debate would seem to be about whether the new flight model is better. And it gives me cause for concern that a professional developer would release a product half done - not updating the config files. Expecting third parties to do it isn’t acceptable.

I suppose the problem with the latter is that it would make piracy of those planes much easier ?

So there’s no difference, except your reason for using such a mod. Someone has already created a mod to “fix” the flaps issue on all Standard aircraft. There’s no need to tinker with files yourself. Why not give it a bash?

Sure, everyone does it according to his preferences / knowledge, as always

o get an update out ASAP for everyone. We should not be expected to go under the hood to fix a problem that makes this SIM not work.

I understand your sentiment, but this flaps fix is nothing more than a config file change just like every other mod out there for aircraft. Whether you are changing the flaps, or adjusting max RPM of a prop, the changes are made to the same files, and is this example I think the very same file.

There is no distinction but the purpose behind creating the mod i.e. it’s purpose for being created.

So if you had a previous mod for an aircraft that changed a dozen things, and flew great before the UK update, which then broke how it flew, you would reject the mod because the dev. made one change to a single line, to workaround the flaps issue, and pushed that new mod version, even if it made the “aircraft better”, to use your own words, and instead continue to use the old version of the mod that doesn’t also change the flaps, even though it now flies worse than it did before?

It’s quite simple fix, I agree, have mods to make it easier. But we paid for MSFS, there are some planes you cannot modify the .cfg file due encryption. A few KiB hotfix could solve this for us until next update. It looks like Asobo have no idea about coding a flight simulator

You are right about this workaround only working on Standard edition aircraft. For all others Asobo have to fix them to work with the new flight model.

They really should allow the tweaking of those aircrafts parameters. Not removing the encryption, just exposing the relevant config files but still protecting them from theft.

I think one of the reasons cited in a previous Q&A was pretty flimsy. It was because they didn’t want modded planes tainting the landing challenges.

Uninstalled sim, rolled back to negative review on Steam. Fix this mess NOW. Decision to not release an hotfix knowing both problem and solution, and telling people who paid for a product to fix it themselves because you broke it is OUTRAGEOUS.

if you want the opinion of an idiot (me),
i would say we can stop complaining or crying over spilled milk, the MS/ASOBO people know they screwed up,
i just hope they learn from their mistakes next time

ok, where can I transfer my paid money to mods instead of developer? Thanks.

For me it was relatively easy. I made a donation to the developer of the GNS530 mod, for example. Did you have something else in mind?

I humbly disagree, as an idiot I think putting blame where is due makes people learn, they shouldn’t get away with something so serious like we can swallow anything without a blink. I could bear some bugs, but having a broken flight model, worse than alpha release for probably a month? This is beyond “crying”.

yes, taking that donation from the 70€ they got.

I enjoy flying the 208. It was okay unmodded, was much better modded, and broken again after the UK update was released. My choices are simple:

Option 1 lets me continue to enjoy an aircraft I like flying. Option 2 does not. Option 2 is the least effort, and yet still leaves you with a broken plane.

I don’t have a piece of paper on my wall that says I can conduct brain surgery, but I’m going with option 1.