traffic but why is it pulling “Airbus” as the MFG name in the label??!?!?

It’s Asobo bug. I know how to fix this. But beware. FlightAware does not always speak correctly. 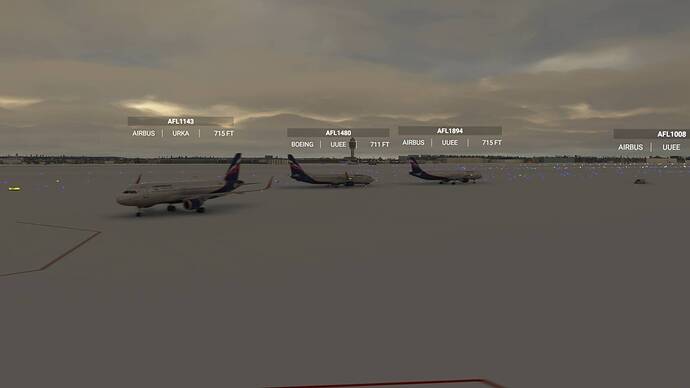 Quick pic with the potato quality, feel free to check them all (time of the day was changed so planes can be seen better).

We will release all our documentation/go open-source in some time after release. For now development stays closed, it’s easier to make everything orderly, legal and controllable this way.

I offered my help - was refused.

An official status update is coming in the next few days, I will tell more there.

UAL1158 was a Boeing 777 according to Flightaware yet your sim loaded Airbus for that and many other flights. In my sim it would have loaded a generic plane because there is no matching model, its odd that yours went for an Airbus. Do you have some sort of mod that has caused this?

Thanks for your help.
I do have the megapack and some other liveries but dont know why the sim is not using those instead of the generic pastel colors.
Will try to tweak some more tonight and see if I can add your suggestions. Thank you so much.

This was posted by another member but I can’t find it. It’s much better than nothing IMO. If using the flybywire mod, it doesn’t work for me:

To get live traffic wearing appropriate A320 liveries. Here’s what I’ve done:

Open folder…\Official\OneStore\asobo-aircraft-a320-neo\SimObjects\AirPlanes\Asobo_A320_NEO
Open aircraft.cfg with notepad or your favourite text editor
under [General] add the line icao_generic=1
Save the file & close

You’ve now tricked the sim into thinking the A320 is generic & it will now pick it up for live flights. The sim only seems to pick generic models for live traffic. It wont usually be the right aircraft model but there’s a good chance it will be the right airline if you’ve installed all the A320 liveries from the latest megapack. ie instead of a Delta B737 you’ll get a Delta A320N

Doesn’t it have a huge impact on the performance to fly a A320neo airliner for AI traffic Airbus A320s ?

BTW, Sophie and the team is doing a tremendous job and looking forward to having hands on it real soon.

Like I said it’s better than nothing. Doesn’t frame impact depend on ones system? Is frame impact worse using A320neo real liveries worse than the default ugly painted ones? I haven’t noticed and personally don’t care. All I can suggest is try and see for yourself. You can always change the settings back to what they were if you don’t like it.

I am not convinced that it does have a huge impact actually. As these A320 AI aircraft move away from camera lod is reduced so this takes a lot of strain off the system. At Heathrow I see no reduction in frame rates using the A320 for AI. That isnt to say that will be the case for everybody but for people with good rigs, its fine.

Well, in terms of a palliative remedy for A320 AI traffic, it might be held welcome, of course.

But I’m personally on the all or nothing side… still hope this project will come out real soon, given the extent and scope of the real time commercial airliners.

still hope this project will come out real soon, given the extent and scope of the real time commercial airliners.

I took your advice and have made the changes you suggested. Thank you so much.
Mixed results. Some realtime traffic shows up with actual livery and some shows as A320 neo.
I will have to do some comparison on the liveries I have. Delta, Alaska are fine. But AAL, SWA are generic neos! United was always there even without the changes. Have not tried non-US airports yet.
Any suggestions? I do have SWA and AAL in my community folder BTW.

Just to add my current experience to my prior post:
I changed most of the aircraft.cfg with isaitrafffic=1 and now most if not all live flights use the liveries, albeit they are all airbus 320s, but so much better to see a live traffic plane displaying the same livery!!

Like I keep saying it isn’t perfect but I so see SWA and AAL at various airports.

Ideally each livery should include an AI model folder with the appropriate ai model.cfg within it too and an additional [FLTSIM.1] configuration pointing to the model ai folder within the aircraft.cfg file.

I think this is probably important for keeping performance up with AI aircraft rather than trying to use the flyable model.cfg for live traffic by just changing the isairtraffic = 0 to a 1.

Wasn’t all of that fixed with the latest mega pack?

Up to date FAQ is available in this thread.

No, some of the liveries are not configured for use as AI traffic even in the latest megapack.