This is a direct continuation of AIG ban and Contribution thread and its clarification.
Previous main tread can be found here.

I’m obliged to inform you, that day after this misunderstanding happened, Alpha-India Group artists revoked permissions to use their products in the FLAi for F3d and Prepar3d, it’s inaccessible for download since 29th Dec.

As Alpha-India livery artists stated in the discussion following this event, their concern is our trailers and other media, stating the unclarity of the shown models and liveries origin. Unfortunately, despite good intentions, it appeared that the videos, descriptions, and pictures we shared
can give the impression that FSLTL created the original models and liveries that are shown.

To be clear, it was never our intention to portray the models and liveries in the videos as being created by us. That’s why we are taking our trailers and screenshots on the Discord channel down.

Also they demanded, and I have to be very serious here, AIG artists have an absolute right to do so, that no AIG content will be used in FSLTL directly or indirectly.

This is why, in order to restore FLAi in the shape everyone used to and comply with the legal demand of the authors of the original content, we are breaking any agreements with FLAi. On the moment of this text being posted, AIG artists haven’t restored their permissions, but we hope they will do so shortly.

Formal text of the agreements is shown below. 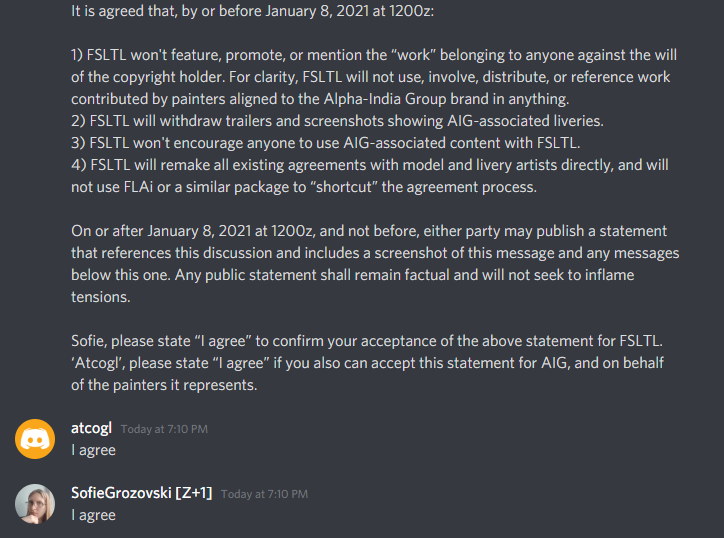 FAQ [Will be populated in response to the comment section]

Of course it’s not! We’re continuing the development just as planned before. However, it’s obvious we will need your help as many of the liveries must be remade in order to be used with FSLTL.

Three artists, @AirplaneNiner, @GERairborne272 and @vLegion are joined the team already, we’re extremely grateful for them as they are people making FSLTL possible. We welcome all livery artists to help us make AI and VATSIM model-matching for the MSFS as it should be done. Obviously all livery contributors will have access to the closed alpha and will be properly attributed.

What about the release date?

This can sound paradoxically, but these events made it’s easier for us to release public beta sooner, than we expected, as there is no need to develop a sophisticated algorithm for FLAi package injection. Sure, there will be not as many liveries on the launch as it was intended, but with help of the community talents, this can be overcame in the reasonable time.

It looks great. However we’ve chosen to separate this statement and one with the new media in the time and space. It will be an additional announcement, few days later.

What happens with VATSIM now?

As agreements with FLAi are void now, we won’t port FLAi to the MSFS. However FSLTL will support VATSIM on it’s own.

What will happen with FLAi now? Is it back online? When it will be?

As I can’t speak for AIG or FLAI, this question should be addressed, for example, on the official FLAi Facebook.

I’m asking everyone to stay calm and civil in the discussion below.

It’s however great to hear that you won’t give up no matter what !

I‘m just glad to hear of the paradoxal that it makes the release easier and we‘ll have access to the beta earlier.

I’m Evan, one of the volunteers who helped compile FLAi (which is a package of several free models and liveries that we created with the permission from the original authors of that work). FLAi is only compatible with FSX and P3D, and there are no plans to change that in the immediate future.

I’ve been involved with this subject since the original thread mentioned, as the original plan was for FSLTL to use FLAi as part of their project. That is no longer the case.

If there are any questions specific to the future of FLAi, I can do my best to address them here or on our Facebook page. At this point, we don’t have much information to share.

I truly believe that everyone involved in this has the best interests of the community at heart, and are all trying to do what they feel is the right thing. I share Sofie’s sentiment that we should keep this thread positive, focused on the future of FSLTL’s plans. Great projects in flight simulation have always been created by passionate, motivated individuals, who in many cases have given their work to the community for free.

I seem to remember a post where it was stated that model makers whose content was within the FLAi group who were also participating with the FSLTL project had given permission for their work to be used within the project. Is that the case?

FSLTL will need to obtain those permissions for their own project. I believe that process may already have started.

So what does the project have at its disposal at this point in time? Instead of “stay tuned” posts that get everybody excited only to give us permissions gloom in bad news posts some days later, and we have now seen this twice in the last month, how about telling us what FSLTL actually does have in terms of permissions and models?

So legally now AIG will be the sole responsible for the FLAi packages in MSFS? (As they are now working on AIG software for MSFS)

Not really. AIG is a brand of freeware developers who produce mostly liveries for the community for free. (I don’t speak for AIG nor am I “part of” that group as I am not talented enough to produce liveries.)

FLAi is a group of 4 VATSIM members, one of whom is me, who put together several model and livery creators’ work into a model matching package designed exclusively for the VATSIM network. Several of the liveries you see in FLAi were created by painters who consider themselves part of AIG, and a few models are too.

If you’re looking for AI aircraft for MSFS, I believe AIG has an “AI Manager” that allows you to get that type of content.

If you are looking for model matching in VATSIM for MSFS, that does not currently exist (to my knowledge).

Re-aquiring permissions replacing aquired by FLAi will take some time, but I don’t think it will take too much.

As I’ve already said, this post is intentionally separated from the main upcoming to prevent unnecessary inappropriate behavior and keep development updates free of this type of discussion, so, yes, more info later, and not here.

Also to avoid this drama in future, I think you guys can have a gateway system where artist can submit liveries, however before they submit liveries, you can put disclaimer about the license that we whatever they submit, will be following FSLTL license and not individual licenses.

To bring a bit of light regarding to what is AIG:

AIG is a group of people providing all kind of stuff for AI Traffic in Flight Simulator (Models, Repaints, Flightplans, Callsigns, Software). These products are released under the AIG Banner.

On the other hand:
AIG hosts a big forum/community related to mainly AI topics. Users can upload/preview their products there, but they are not part of the internal AIG Group.

Sure, this will be made, also I’m encouraging all the creators to use CC-type licenses, there are plenty of them for any taste, as this permits to make copyright violation claims easily for the creators and makes it much easier for those, who came after.

For some unknown reason it’s not very popular in the avsim community.

Thanks Kai, so to clarify the confusion, I thought AIG OCI use pool of liveries sources, one of these FLAi, isn’t? Or do you guys download the liveries directly from the painter’s source to avoid any copyright violation?
Sorry again for the confusion, I have been using AIG OCI for many years and never paid attention to the copyright issues

If you look at our website (www.flai.app), you can see a list of the people who gave us permission to include their models and liveries in the package.

AIG’s OCi probably includes many of those same liveries and models, but does it by going directly to the original source to avoid any copyright concerns.

Unless you use the VATSIM network to fly online, you really have no need for FLAi.

For my coding personal projects, I always use MIT license. Not sure how it works for liveries and etc.

ah wait now I get it lol, sorry for the fish brain, it is indeed confusing. So now FLAi same as FSLTL, won’t be using any liveries associated with AIG. For FSLTL, they will have to contact every livery creator to grant the permission to use the livery in FSLTL (not FLAI as how it was before). Isn’t? (I hope now my understanding is correct lol)

AIG OCI is downloading everythig directly fromt he developers sites. That is makes sure no copyright violations are heppening.
Not a single paint or model is hiped with AIG AI Manager. All is downloaded on runtime from the original sources;)