So do you have 2 overlays, one for PFD and MFD or one overlay with a switch option in setting like the one included with AM?

Great work by the way.

So, is this based on Airmaganer 4? I use a hardware panel and would be well-prepared to pay for a working Airmaganer-4-based 2-G1000 solution.

Thanks, I knew what I needed to do but couldn’t find it… Just needed to scroll down under the panel view… Duh, getting myopic.

There is one Overlay, but it has User Variables to Define if it is Pilot PFD or MFD. I will make basic Panel Art for single and dual (instruments) overlay panels. There is also the notion of CoPilot PFD in the Russ Barlows original work, but until I know what the differences are, I won’t implement it. The Autopilot button array on the left is also independently controlled (visible or not) meaning you can have AP off, on or on both, Not shown in the above I have a small Debugging flag in the top left of the display that says PFD or MFD so you know what mode your overlay is running in. It was useful for debugging when running a single overlay that both have all the same buttons. It has user-defined visibility so that purists can turn it off. I had hoped that I could do the two G1000 + Center COM Stack side by side but it makes the individual overlays too small / crowded.

I’m trying to decide if I do map panning now or later I have to see if Mobitflight even have events for this. The other big wish is to handle long button presses. I’ll ask about that later today.

I will say this significantly improves my Flight Tracker Button array layouts below on the Steamdeck, I need more encoders now (I have a plan for that)

The new code is better grouped/structured and more readable / commented especially in VS Code too BTW, that should make understanding it easier. If stuff does not make sense, feel free to ask questions.

Thanks, I knew what I needed to do but couldn’t find it… Just needed to scroll down under the panel view… Duh, getting myopic.

Yeah the UI is not intuitive at times, its easily missed.

Just need 2 touchscreens side by side with a knobster or 2 in the middle. On left panel the PFD and auto panel and the right is the MFD with room for flaps or trim on the side. Makes for a nice setup.
I’m getting ready to cut a couple panels, 1 to mount my touchscreen and radio stack with the switches for other things and then another with a physical G1000 set and switches.
The touchscreen will be for steam planes and the other for glass planes

This works remarkably well (mostly). I have my 2 tablets set up as monitors using Spacedesk. 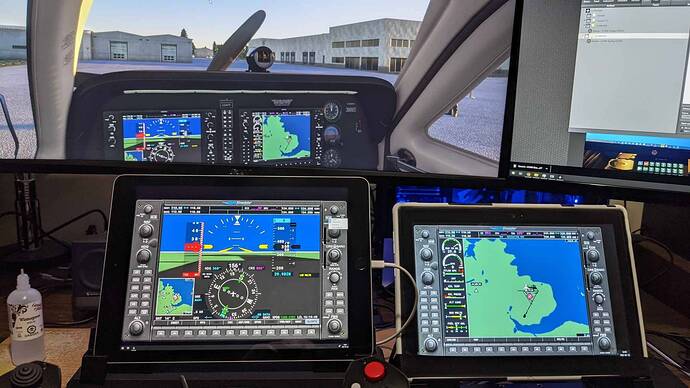 The issues I’m having:

I think he has some debugging code you can uncomment that will display the mode the panel is in, just to confirm which panel is which mode.

It should be near the top before the function definitions.

I see that g_unitpos variable.

I don’t see a commented line to display the variable anywhere. In AirManager, I see the value. No matter what I select from the drop-down, it always shows it as the Pilot PFD (1).

I started over from scratch with a single bezel in case I had messed something up. Regardless of what display I select, actions only affect the pilot PFD.

This takes too long to set up before a flight and doesn’t work as I’d like it to. I think I’m going to pass for the time being.

That’s what I did. Set a single bezel as MFD. It triggered the PFD regardless of how I set that variable, be it from the select box or hard coding it in.

I even commented out the logic that selects the mode and manually forced the variable to 3. Still it functions as pilot PFD.

Are there both PFD and mfd variables in the code?

There aren’t. Just found this out while looking at the code more closely. The only function via Mobiflight are to the PFD. That would explain the issue I’m having.

A single overlay would work but the drop down would have to set a flag then have each function check the flag to choose the correct variable. Two overlays may be just as easy from a coding standpoint since you can clone the current one

The quick fix for this would be to create a new generic instrument using that one as a base and replacing all instances of PDF command with MFD. I’m quite familiar with those Mobiflight calls as I build G1000 PFD and MFD panels for my Stream Deck XL. A quick search and replace would sort me right out.

But it would seem @XAxSys has something working on his end. I’ll likely just wait for him to share his updated final solution and use that instead vs reinventing the wheel.

Correct. In the version I downloaded from earlier in this thread, that drop down does nothing. I suspect it’s an older version

I use a 22in touchscreen where you’ve got your tablets and moving and resizing the glass screens is a bit less painful. I hope one day persistency will be somehow added. Nevertheless, I am in Sim Heaven now that i can use AM 4 with these, looking forward to see the GNS units done.

Exactly. With a single touch screen, I wouldn’t be having that issue. At least it would be a lot easier to arrange stuff than doing it on tablets. It’s no fault of Air Manager or XAxSys’s work. It’s the lack of persistence on window placement in the sim that’s the issue. Perhaps some day they’ll fix it, but not holding my breath on that one.

Has anyone played with a function to detect a long press in Air Manager?..want to use it with the clr button on the GNS530. Thinking somehow using the timer_start in a button_down function or something like that.

I agree with you and sadly I have no way to fix that. During development I sized my G1000 to be the correct Size for the popped out window, But I still have to pop it out each session. When I try to put both popout on the 1080p the G1000 bezel is too wide So I have to size down the popout and Bezels to fit. That then makes the bezels very crowded. I need either an ultrawide touch display - (Does anyone know if such a beast exists?) or a 4K touch display (same question) I do have a 15.6" 1080P touch display coming on Friday in the meantime…

You are not doing anything wrong the current panel does not yet support the MFD and there is no logic tthat fines the differences… in the current version. I’m sorry I should have made that clearer!!!

the being said I am nearly done testing the logic.lua file where the MFD logic IS implemented and it should wor as you expect I may be ready to post the Logic.lua file tonight. Ping me on discord after 8pm PST if you want to try it out!