In the aerodynamics video this doesn’t seem fixed… But yes its wise to wait and see.

I‘ll have to try that out. When I flew over mountains thr last time it didn‘t do anything, it were the Rockies. The last time I flew in the Alps was when the sim came out. Possibly a setting? Or do you use any custom set weather/wind? I usually fly with the real weather setting.

Indeed, a center of pressure (CP) ahead of the center of gravity (CG) is rather unusual, to say the least. Especially on an aircraft which I remember to have a reputation of being a bit nose heavy

As far as I can tell, this configuration would (at best) have neutral longitudinal stability which is definitely outside of certification requirements.

CFR 14, C, §25.173 (Certification requirements for airliners) does state very clearly the longitudinal static stability requirements. If the green, red and blue arrows in that pic are not a bug, it should indeed raise some eyebrows with an aeronautical engineer. Do they even have an AE on the dev team?

On a sidenote: Boeings 737-MAX8 was unable to meet the requirements in 25.173 section c), which was the reason the MCAS system was introduced.

Here are my thoughts on that picture:
If there is an aeronautical engineer on the dev team who told me: “That’s correct! It’s exactly how we designed it and this is the actual Boeing configuration” I’d be very surprised,… but I would believe it.

Without a clear statement from a subject matter expert however, my bets would be on this being a symptom of a rather un-orthodox flight model

Let me ask you this question, for optimum fuel economy would you prefer a forward or aft CG in real life? On all aircraft I know an aft CG provides better fuel economy because CG will be closer to the CP with reduced (down) force required on the horizontal stabilizer and therefore reduced trim drag. Its completely opposite the way it is in FS2020… Why does the Boeing 747 have trim tanks located in the tail? Regardless if CP is behind or in front of the CG, the effect of the whole airframe will create a nose-down pitching moment with a nose-up pitching moment (downforce) required from the horizontal stabilizer for stable flight, on that I have no doubt.

Yes, it was 747. I found possibly an other quite fundamental issue with aerodynamics, conserning to main wing airflow directions or how it is ignored. But I think it is better to wait next aerodynamic update and enjoy great scenery and weather system (when it working) until it is released

There are other aircraft configurations, like most prominently these dudes: 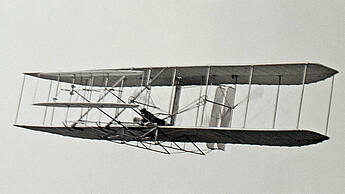 They didn’t have any trim downforce, and consequently didn’t get a benefit from an aft CG

The regulations don’t directly specify how that stability shall be created, just that the A/C has to have it. I am also not all too deep into the B747 variants but I know that they have an aft trim tank. I’m more an Airbus guy.

For me - personally - it is really not the question if any particular aircraft is poorly modelled. I am just hoping that the physics engine itself will even ALLOW for correct modelling. Let’s keep our fingers crossed that they have experts working with them.

this is not so unrealistic : in real life most pilots over react. If you let the plane a bit more the net flight path is quite straight

I wouldn’t say most pilots overreact in real life, student pilots maybe. Of course the aircraft has natural stability but in heavy turbulence / windshear there is no way the aircraft (C152 in this case) net flightpath is straight with absolutely no pilot input.

Makes me wonder how turbulence is generated in the sim, is the relative airflow really changing the local angle of attack on aircraft surfaces or is there just something random coded in which temporarily causes an upset. It does not feel very realistic at least.

But lets wait until the next update, maybe they’ve improved on this.

It seems counter intuitive and even many pilots are unaware of this, but in the short run gusts and turbulence change the A/C trajectory only marginally.

Yaw:
The nose will “weathervane” into the wind and thereby create a wind correction angla quasi automatically. Trajectory will not change significantly with yaw.

Roll:
Should be actively countered by pilots on conventional aircraft. FBW requires much less of that countering. Uncoutered roll upsets will generate a trajectory change only if they persist over a few seconds. By that time, chances are you have already been bumped in the other direction

Speed:
No one seems to complain about speed

however, this is a big factor for trajectory changes due turbulence, and one that is not automatically countered by stability coefficients. Yes, there is speed stability, but we’re talking minutes, not seconds here.

I think the reason for the net flight path not changing all that much in the long run might be because they are generating white noise for turbulence (?). There is simply an equal chance for a moment in either direction, which will (over time) lead to an overall net change of zero.

Almost funny, that of all people I am the one sticking it’s head out for FS2020 here

I do think that this software in general needs a lot “more sim - less game” but I think the slow trajectory changes are more a sign of a somewhat “generic” weather model than an actual fault with the physics engine.

is this whats causing the airliners to sometimes having a high degree angle of attack when cruising above around 37k feet? when im using the default load out and tried to cruise on the 787 above 35k, the angle of attack is at 4 degrees during cruising (with 480-490 TAS) which looks super weird. However when I save the position and load it again in the same altitude and speed the aircraft turns normal with only 2 degrees AOA during the same cruising pattern.

That could have something to do with the icing problem others have noticed.
Have a look through the posts in this thread and see if you have the same issue.

Anti-Ice does absolutely nothing.

That could explain why when you when you reload, you aren’t affected.

ASOBO have stated they are in the midst of a major overhaul of a lot the default aircraft.
There have been rumors it may even make this next update.

they put in some strange effects

Yes, this is my impression, too. I did not understand why the gusts setting minimum is 50%. But this lot of noise just fakes dynamics for the simple minded.

The biggest thrill I get in the sim is from relatively short flights … and when I do come back to reality, it’s always with a big smile on my face!

I am only an armchair pilot. I work a lot at flight model mod. And I work until I get a “feeling”, the sensation that this airplane or sailplane is simulated as good as my abilities and the abilities of the simulator are. It is hard work, because a lot of stuff is not documented, but if you are persistant you are successful. It is rewarding work.

Asobo (and maybe Microsoft) underestimated what you need today for a first class flight simulator product. But if they had known how much work it is in the beginning, they may have not started at all. Naivety is bliss!

I could not find a way to move the aerodynamic center independent of the cg.

Parameter empty_weight_cg_position sets the cg. Parameter aero_center_lift sets the aerodynamic center. Other parameters have a small impact, but these are the “big sliders”.

Asobo (and maybe Microsoft) underestimated what you need today for a first class flight simulator product. But if they had known how much work it is in the beginning, they may have not started at all. Naivety is bliss!

I think the greatest problem Asobo face is a language barrier. Often french and also many german speaking people simply don‘t know much english. They have been looking for new employees, fluent french is required. You are limited to a small group of advisors compared to the huge amount of perfectionalist flight simmers in other countries, USA and UK as strong forces. But when you can only communicate with them on a very basic level you will have problems to get the problem, so to say. I personally wouldn‘t put it past myself to educate someone in aerodynamics in the english language, while I had no problems doing it in german. And I can hardly imagine for example @Nijntje91, whose mother language I don‘t know but whose skills to put it in a nutshell (Lol I had to leo that expression) here are remarkable, stand in front of Asobo and tell them somthing about center of pressure and negative AOA on the horizontal stab.

white box does not represent the MAC

My research shows me: white box is not the wing. Even Aircraft Editor, Debug, Sim Forces does not show the wing in longitudal axis correct.
I assume the values you enter are used as expected by the “beast”, the integration simulator core, but the tools output is faulty. Do not believe your eyes too much!

Yes, but changing the aero_center_lift parameter also changed the cg for me. That is the issue I am talking about.

how turbulence is generated in the sim … just something random coded

I think Asobo just adds white noise. This is easy and if real life pilots can only express themselves by illustration like “bumpy ride”, white noise fits the bill.